Hi y’all! Up until a few minutes ago I was incredibly grumpy based on the fact that it’s the beginning of the work week, I had to go to the dentist and I had to sit in the Panda Express drive thru for 20 minutes today.  I rarely eat lunch out but I was in a hurry and there were only a few cars.  I would have left when I realized it was going to be a cluster but Panda Express traps you.  I was surrounded by curbs, piles of rocks and other cars.  I’ve settled down now and I’m going to try to redeem this day and make it better.  I weighed on Saturday morning this week because I wasn’t going to be waking up at home on Sunday.  I was down another 2 pounds! That’s a total of 15.6 pounds since I began the slow carb diet.  I am also down 10.6 inches.  I can definitely tell that I’m only 2 pounds away from getting rid of the holiday weight completely.  It feels nice, especially since I’ve been working hard.  I have 20.3 pounds to go to hit my goal by May 13th.  Since I’ve been counting calories in conjunction with the slow carb diet I’ve lost over 7 pounds so obviously that was the key.  I have yet to stray from the diet (other than my allotted cheat day) since I started but late Saturday night, I was starving and decided since it was after midnight and it was “technically” Sunday, I would have a few bites of some carbs.  It’s not my worst ever misbehavior but it still made me feel guilty so I won’t be doing that again.  Hopefully no damage will be done and when I weigh on Sunday I’ll see even more success.  It would be amazing if I could go ahead and knock off the last couple pounds of my holiday gain but I won’t be greedy…any loss will do. 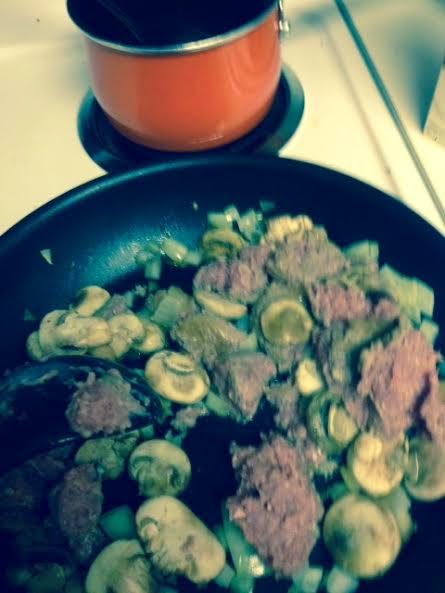 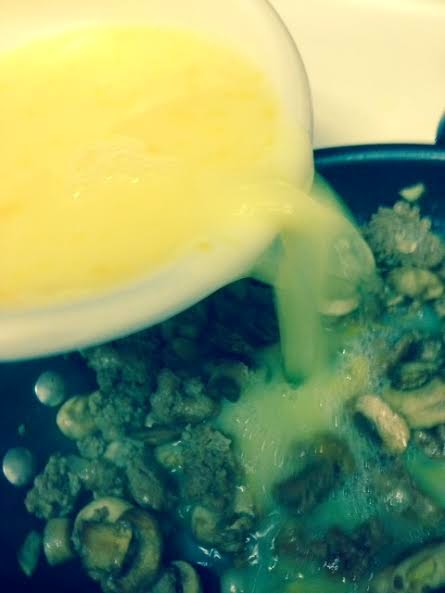 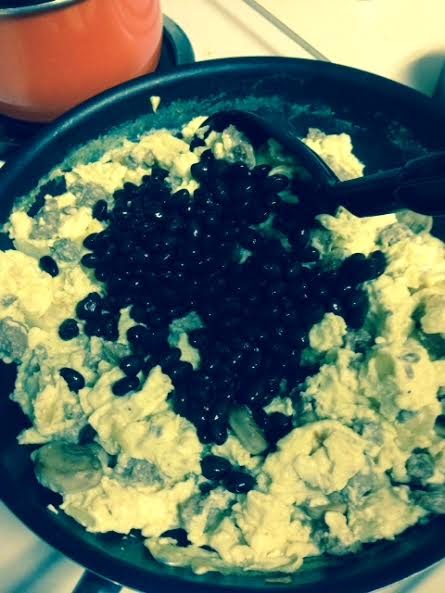 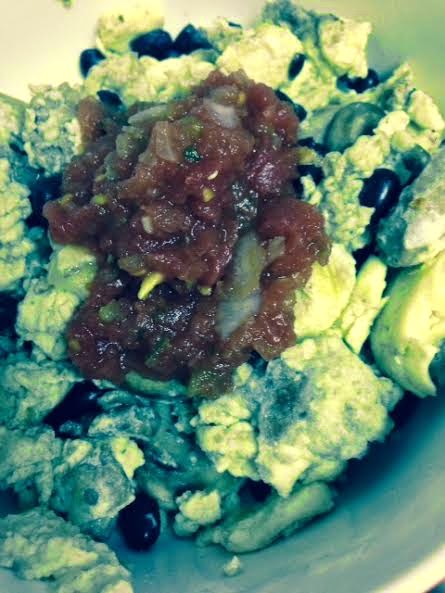 The slow carb diet limits your food to mostly protein and vegetables.  This means that eggs play a big role in your journey.  Of course, too much of anything isn’t good for you so even though I have eggs for breakfast pretty much every day, I switch up and have egg whites a lot too to limit the fat from the yolk.  Eggs are such a versatile food and I use them for all kinds of recipes.  That’s why they make an appearance in a lot of my posts.  I don’t always have time to fry up an egg and make breakfast meat so a couple weeks ago, I made a giant breakfast pan that lasted me the entire week.  All I had to do is split up the leftovers into individual containers and pop them in the microwave for a minute or so and you’ve got a ready-made breakfast.  I combined mushrooms, onions and turkey sausage in a pan and sautéed them all together.  Once they were mostly cooked, I added over a cup of egg whites and scrambled them all together.  Finally, for a little more protein, I added some black beans in at the last moment.  The black beans added lean protein and they made the dish even more filling.  This is something that only takes 15 or so minutes to make and shaves off time the next few mornings because you can heat it up super fast. I added salsa to the top for an extra layer of flavor. 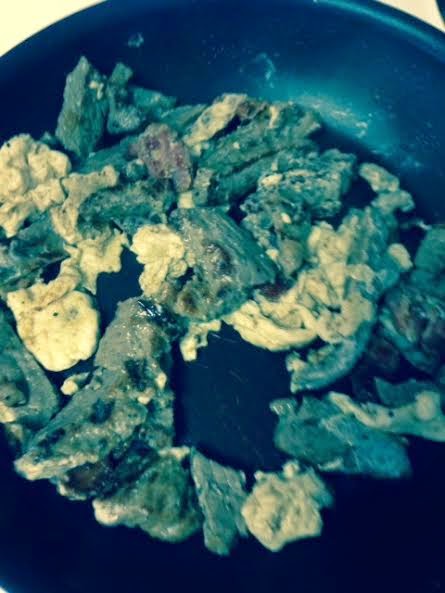 As I’ve stated before, you can throw almost anything in a skillet and make a meal.  One of my favorite meals to make is fajitas.  I buy fajita strips from the store.  They are already cut up for me and seasoned.  They are cooked and only take a few minutes to prepare.  Last week I used those strips to make a steak and eggs scramble.  Having steak and eggs for breakfast makes you feel like a normal person.  I added one piece of chopped up bacon to this to add even more flavor.  It was delicious. 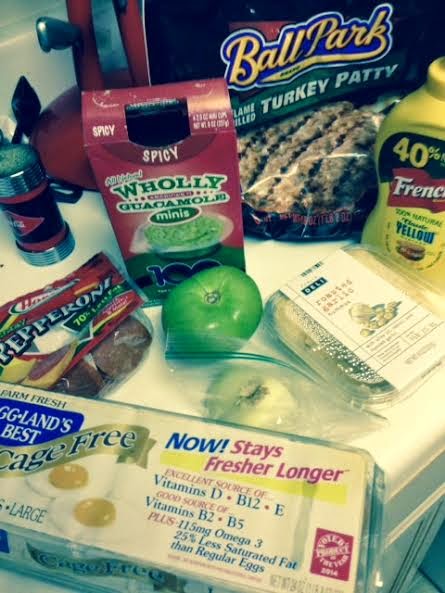 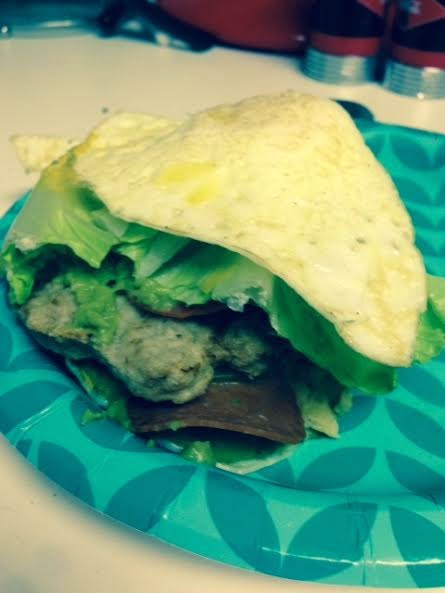 Eggs aren’t just for breakfast y’all.  My brother has made fun of my various ways to “replace” buns.  “I respect you but I feel sorry for you.”  He is not interested in using tomatoes or lettuce to provide the top and bottom of his burger instead of bread and who can blame him?  I told him about my egg bun idea and he wasn’t crazy about that either but I think it’s my favorite.  My newest obsession is the pre-cooked Ballpark Turkey burger because they are so easy.  I made this burger burst with flavor.  I cooked up two eggs over medium (I like a runny yolk) and in between those two eggs I added the burger, spicy guacamole, garlic hummus, turkey pepperoni, green tomato, mustard and onion. When I took a bite of it, it was messy like a real burger but held together.  All the flavors came together in my mouth and it was totally delicious.  Because of the eggs and guacamole, this burger can range from 400-500 calories but it’s satisfying, I promise. 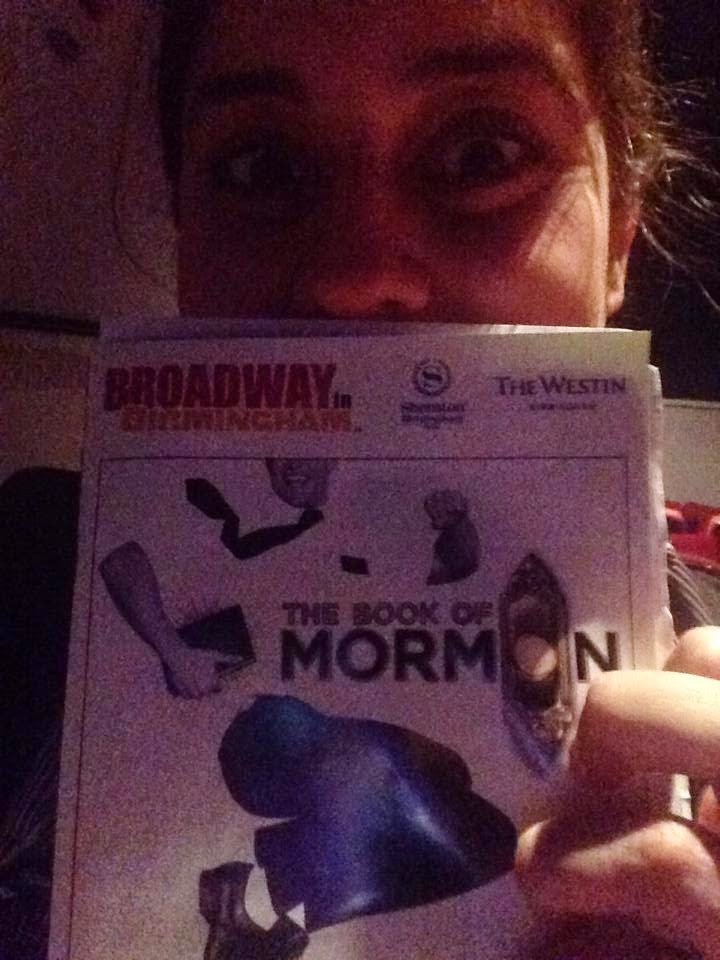 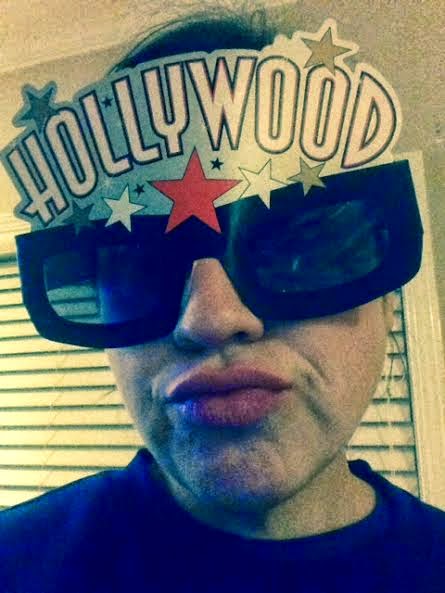 Yesterday was a great day.  I woke up and had waffles to start my cheat day.  Then, Mom and I went to see The Book of Mormon in Birmingham.  It was awesome.  It’s the third time I’ve seen it and I notice something new every time.  Finally, I headed to Jordan’s so we could have our Oscar party.  We had so much yummy food and had a great time watching the red carpet and then the show.  There were a few surprises but nothing particularly shocking.  I was so happy for Eddie Redmayne and Julianne Moore.  I thought Gaga did a great job and there were some really moving speeches.  The show was slow at times which is fairly normal but I can see how some found it boring in the middle.  Neil Patrick Harris did a nice job but I’ve seen him do a more fulfilling hosting job.  Overall I was satisfied with the show. I was sleepy when I got home last night.  I drove him in this nasty weather Alabama is having.  So much rain.  Even though I was tired and had an early morning, I wouldn’t trade it. I had an awesome day.  Apparently I was feeling the selfies. I am already looking forward to next year. #operationoscar Have a great week everyone!