Top of the Monday to ya.  I’m sitting here eating cucumber slices and hummus and preparing for a long day.  Last week Tuscaloosa got all caught up in a snow scare and classes were canceled on Wednesday.  I’m not complaining about the snow day because even though I had to do some lesson plan rearranging, it was nice to have a day off.  Even though the town was in a panic, it was only raining so I mustered up every bit of energy I had and made my way to the gym.  It wasn’t my smartest idea.  I guess I thought since the apocalypse hadn’t taken place that everything would be open.  I was wrong.  I was devastated to find out that the gym was closed.  Since it was gross outside I did a few crunches and pushups and called it a day.  I made some taco soup (that I will post soon) and to be honest, I was probably a little liberal with my serving sizes.  I maintained my exercise every other day but I just felt heavier at the end of the week.  Saturday night I made steak and stuffed peppers (I will also post these soon) and I also ate too much then and had a couple glasses of red wine.  I never strayed from the slow carb diet but I missed one day of exercise and went over in calories a little two days.  Because of this heinous crime, I was up .6 when I weighed on Sunday.  I’m irritated of course because I sure as heck don’t feel like it’s fair to gain weight when I’m still not eating cheese, bread, beer, rice, potatoes or you know, anything super fun.  It’s fine though.  Pending any potential tornadic/freezing rain disasters this week, I plan on hitting it hard every day and making sure I keep my calorie count down.  I want that half pound gone and I’d like maybe a little more loss as well.  On a positive note I managed to lose 1.4" so I'm down a total of 15 pounds, 12" since January 5th.  I have a couple more pounds to lose to completely get rid of the holiday weight and 22.7 to go before my birthday in May. I'm just gonna keep on keeping on. 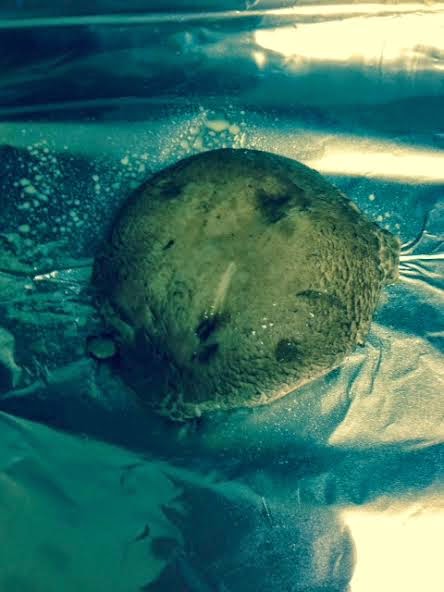 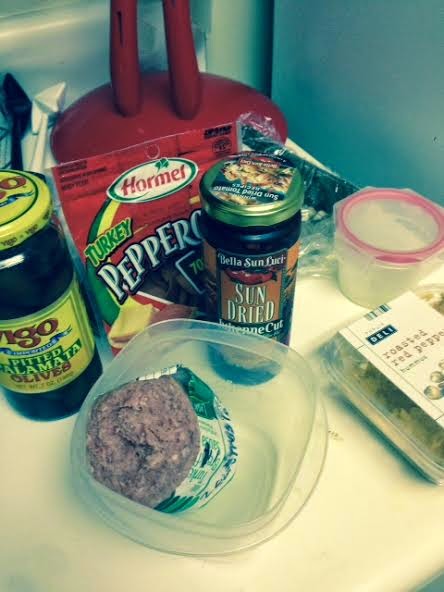 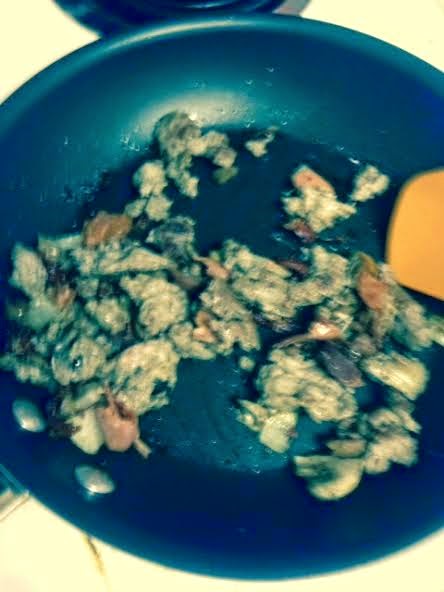 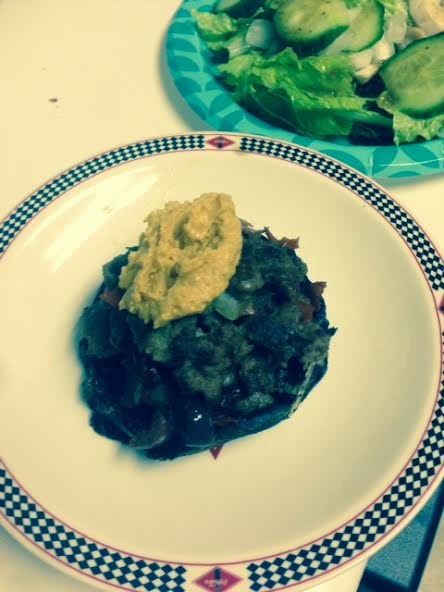 I don’t follow the Paleo diet but there are multiple similarities with Slow Carb.  I know someone who is on the Paleo diet and she posts lots of interesting recipes.  She made a stuffed portabella mushroom with pizza ingredients and it inspired me to make my own version of a stuffed mushroom.  I got a large portabella and scraped the inside of it out.  I put it in the oven with some olive oil spray on low heat while I prepared the stuffing because I like my mushrooms cooked all the way through.  I sautéed turkey sausage, turkey pepperoni, kalamata olives, sun dried tomatoes, onions and peppers together.  Once they were all done I simply stuffed the ingredients into the mushroom and then baked it for a few minutes.  When it got out I topped it with some roasted red pepper hummus.  I know not everyone is a fan of mushrooms but I highly recommend them.  They are meaty and filling and you can stuff the large ones with pretty much any ingredients that you want.  This was totally delicious. 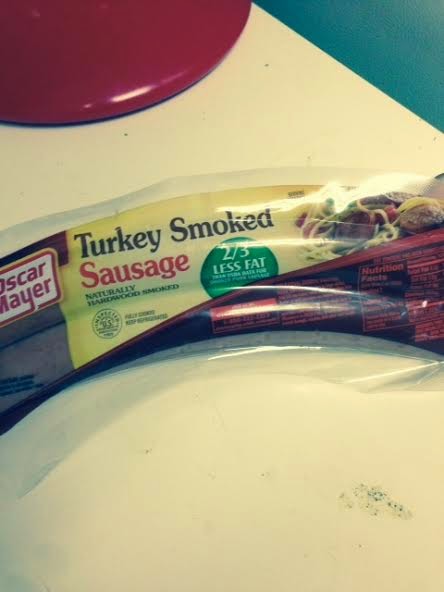 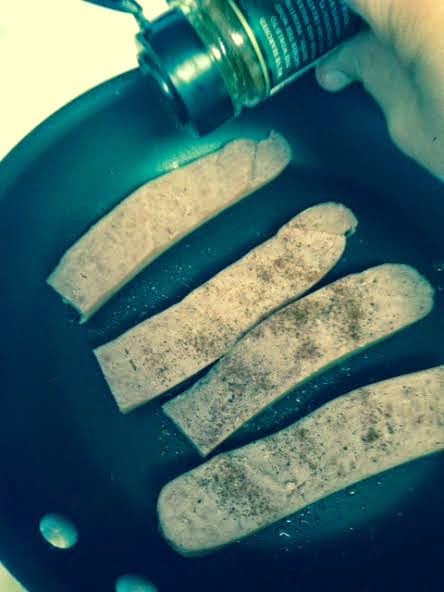 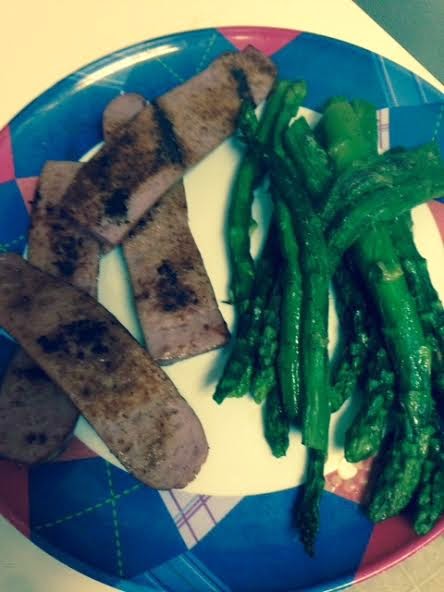 I know me saying how much I love sausage prompts some of my friends and family to giggle because we are all so immature but I’m honestly not sure how else to say it.  I love sausage.  I have been making a lot of smoked turkey sausage.  You can have quite a bit and it’s fairly lean and low in calories.  I’ve just been buying the Oscar Mayer Turkey Smoked Sausage and it’s delicious. I added a little chili powder to give it more of a kick. It’s one of those no-brainer dinners because if you throw it with some asparagus, you’re getting a hearty meal in less than 10-15 minutes. 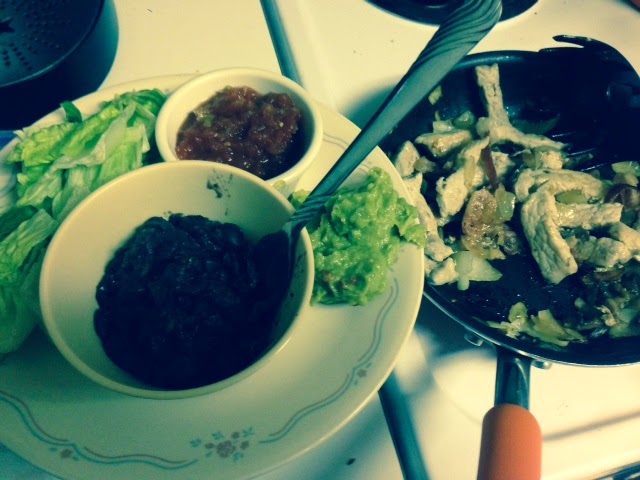 I would say the food I crave the most is Mexican.  I am a lover of cheese, rice and chips.  Unfortunately, none of those things are allowed on my diet so lately I’ve been pretending I’m at a Mexican joint by serving myself fajitas in a sizzling skillet (chicken, onions, mushrooms, bacon, etc) and then for my condiment plate I pile up black beans, salsa, guacamole and giant lettuce leaves that I use for “tortillas.”  There’s something about making it look more like the dish you want that helps a little.  Nothing can replace cheese, sour cream or tortillas but these fajitas packed a punch and served as a tasty substitute.

That's all for this week! I hope you all have a great, weather-safe week!  To anyone who reads this participating in the Tuscaloosa Half Marathon on Saturday, BEST OF LUCK!  I couldn't bring myself to do it again.

I'm looking forward to a productive and fun week! Bye!