From Soup To Summer 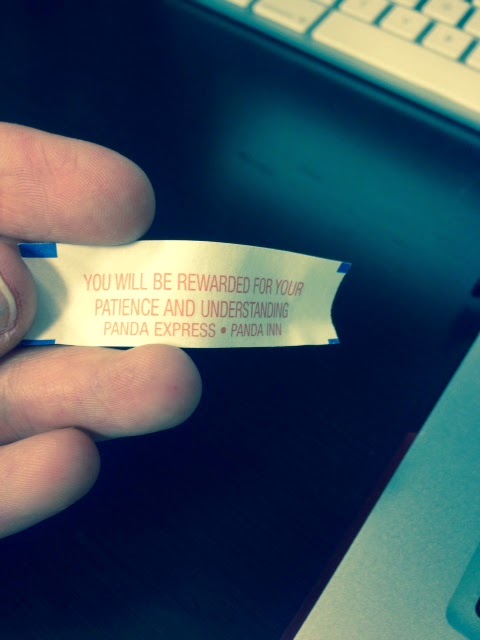 Panda Express must be putting these fortunes in everyone’s cookie because the service at the Tuscaloosa Panda Express is beyond heinous right now.  Last time I was there over 20 minutes.  This time, it took extra time for vegetable and when I pulled up to the window during lunch, I was read a list of options I could choose from because the kitchen was behind.  Because they were out of my normal, I had to get something I usually don’t and found out later that teriyaki chicken and vegetables is over 700 calories.  I was NOT happy.  So, I don’t think I’ll be rewarded for patience anytime soon.  I can’t believe it’s almost April y’all.  It never ceases to amaze me how quickly time seems to move.  I worked so hard last week and played pretty closely to my new set of rules (a wedding on Saturday got a bit sketchy but I did OK) and actually managed to lose almost a pound, even after the calorie debacle of New Orleans.  That means I have lost a total of 18 pounds since January 5th. The holiday weight is gone! I’ve also lost 12.4 inches.  I was definitely surprised I lost but I’ll take it.  I’m hoping it doesn’t have a delayed come back.  I’ve got another wedding to fight through this weekend but other than that, it should be smooth sailing.  I have 19.7 pounds to lose still to get below my lowest weight.  Again, I don’t think my birthday deadline is looking realistic but I’m just going to keep on plugging away. 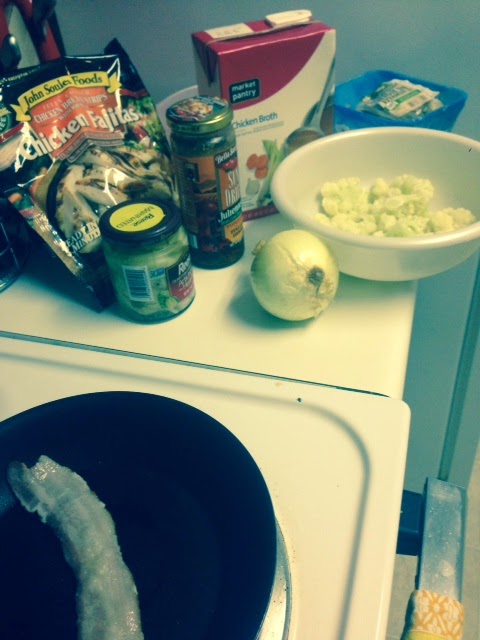 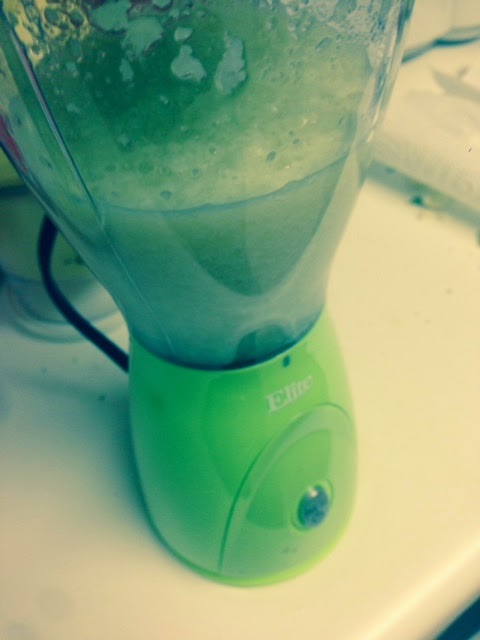 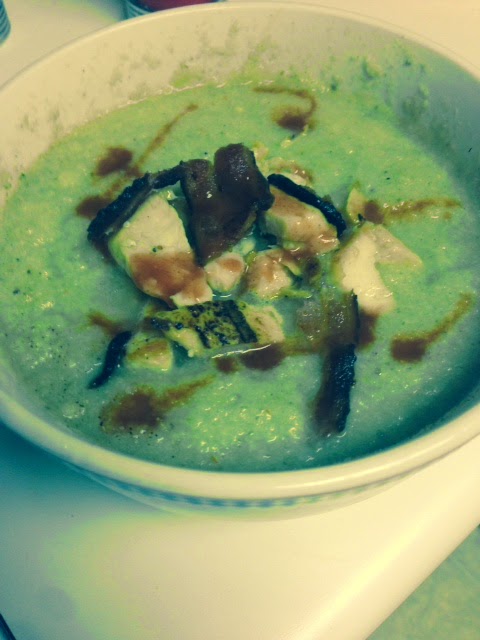 If you follow this blog every week, first of all, thank you.  Second of all, I know you’re probably tired of seeing cauliflower.  No worries, I’m a bit sick of it myself so this will be the last cauliflower recipe you see for a bit though I am certain it will return at some point. I know that it’s starting to warm up but since it’s supposed to rain all week here and it’s going to be chilly at night, I thought it would be OK to show one more soup recipe before summer starts.  For those out there who are staunchly against cauliflower, your brain probably wouldn’t let you enjoy this recipe but I hope you trust that I wouldn’t steer you wrong.  Cauliflower soaks up flavor so when it’s pureed and mixed with tons of potent ingredients, I promise you will feel more comfortable about eating it.  You’ll need a food processor for this because basically, you dump all of the ingredients in it then heat the soup up.  All you need to do is combine cauliflower (about two cups) with onion, artichoke hearts, sun dried tomatoes (both of the two previous ingredients are jarred and soaked in olive oil), mushrooms, chicken broth (about a cup) in the processor until it’s smooth and resembles potato soup.  Then, you heat it up.  You can heat it on the stove top but I just used the microwave.  The best part is the garnish.  I put the soup in a bowl, added fajita chicken strips, a crumbled piece of fried bacon and a couple splashes of hot sauce to the top.  The soup was filling (because you can eat all of it) and it’s bursting with lots of yummy flavors.  If you have one more cold snap where you are, give it a shot. 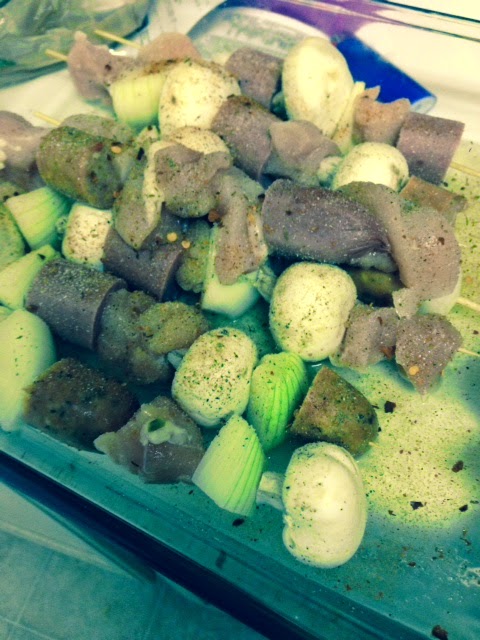 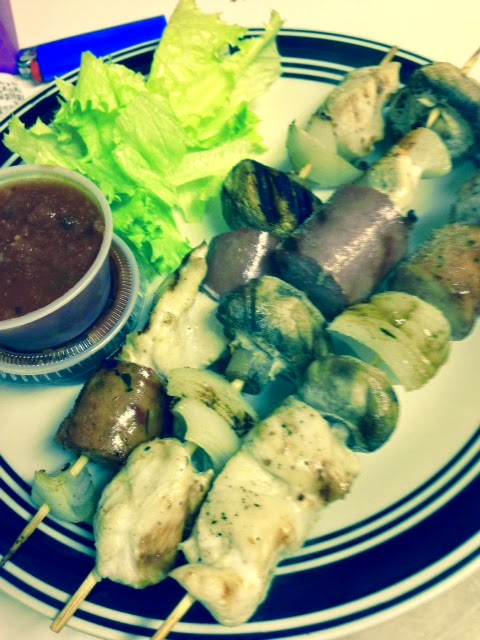 My mom recently gave me a grill pan for my oven because I can’t grill outside at my apartment.  I put it to use by making kabobs.  Essentially kabobs just consist of meat and veggies but they are easy and fun to make and they are kind of pretty.  I added chicken sausage, turkey sausage, chicken breast, onion and mushroom.  I did learn that all items on the kabob need to be the same size. The mushrooms were a bit bigger to it put some of the ingredients off balance.  All I did to remedy this was pop the kabobs in the oven to let them finish cooking to temperature.  I served them with lettuce and salsa and they were delicious! 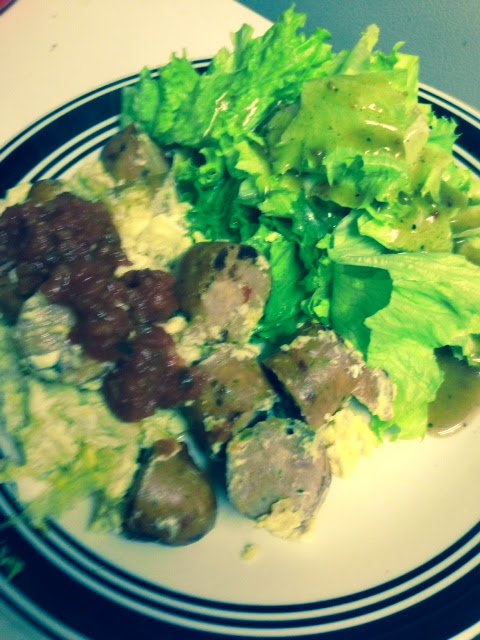 Finally, I threw together a brunch like recipe last week.  I took fajita sausage, chopped it up and mixed it with scrambled eggs and salsa.  I served it with a side salad that used olive oil vinaigrette as the dressing.  It was perfect for a 10:30AM meal.  It wasn’t pretty but it was tasty and had quite a kick.

I get to see Jordan this weekend! His sister is getting married on Saturday and other than cake and finger food temptation, I'm very happy for her.

I plan on working hard again this week.  I hope it pays off when I weigh this weekend.  Good luck everyone!
Posted by Heather Wyatt