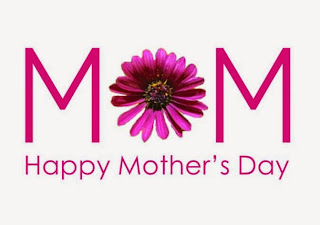 Hey y'all! I want to give an early Mother's Day shout out.  Happy Mother's Day to all of you out there and a special Happy Mother's Day to my mom! Thanks for all you do.  I don't have a great transition so I will just get right to it. I decided not to weigh this weekend.  There was too much going on and I didn't feel like being disappointed.  I ate too much this weekend of course but I exercised like crazy.  I may not weigh the next week or two and just see where I'm at the last week in May but I'm not sure.  I had a great time celebrating a number of things this past weekend and this week will be no different.  Tomorrow is Cinco de Mayo and this weekend I'm headed to Atlanta to go to the aquarium to meet a penguin! Also, Mother's Day is Sunday night.  THEN, the next week is my birthday.  What I'm saying is, my plan is to be good a majority of the time but weight loss is out of the question over the next couple of weeks.  I'm having a good day so far.  I ran 5 miles and had a salad for lunch but I'm making no promises.  We will just see where I'm at around the end of May.  This month is always hard and I'm fine with that because it's such a fun month. 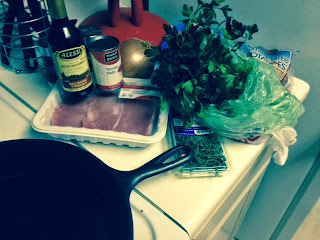 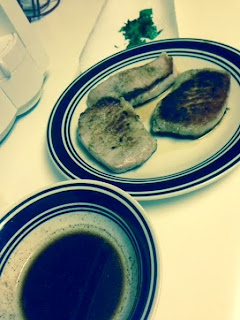 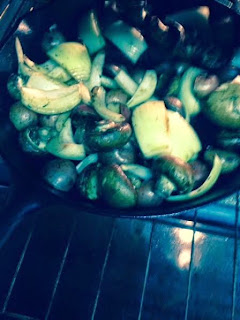 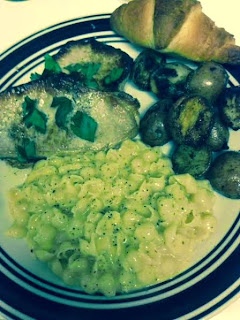 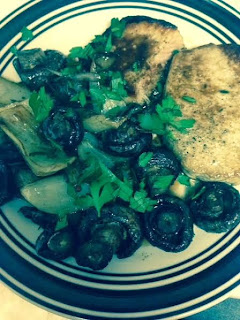 The first recipe this week was delicious and fancy (for me) and it gave me an opportunity to cook in my new cast iron skillet.  It's Balsamic Pork Chops with vegetables.  I like this because it has a bit of a rustic feel to it.  You chop the potatoes (they were for Ian) and onions in big chunks so it doesn't take long.  I microwaved the potatoes a few minutes prior to baking them to ensure they were done.  All you do is create a balsamic sauce that includes balsamic vinegar, tomato paste and some spices and pour some over the vegetables while they bake and then some over the whole dish when it's done.  You get the skillet nice and hot and sear the pork chops on either side then set them on a plate.  You then pile the veggies in and bake them for awhile, then add the pork towards the end.  I ate all the mushrooms and onions and Ian ate the potatoes (I also served his with bread and mach & cheese.  I served mine with wine)  When it's done you top with parsley.  I would have liked some of the pork to be a bit more tender but overall the dish had great flavor and was pretty easy to make. 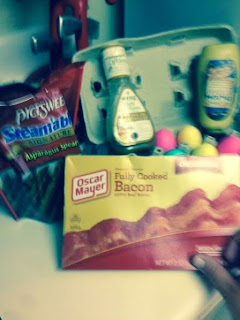 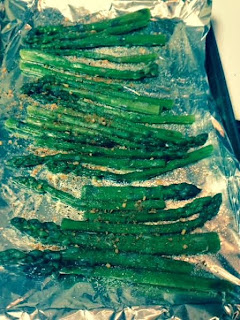 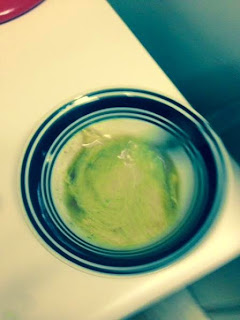 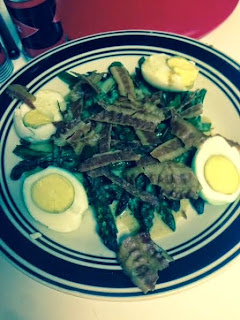 The next recipe is perfect for a healthy summer lunch.  I microwaved some asparagus then added spices to it and let it broil for a few minutes to get crispy.  While that was going on, I mixed together the low fat olive oil and vinegar dressing I have with dijon mustard to make a sauce.  I peeled a couple leftover Easter eggs (I made this several weeks ago) and heated up some bacon.  When the asparagus was done I added it to a plate, poured on the dressing, crumbled the bacon and added the eggs.  It had a lot of flavor because of the dressing and the protein made for a filling dish.  This was simple and fast and I would most definitely make it again. 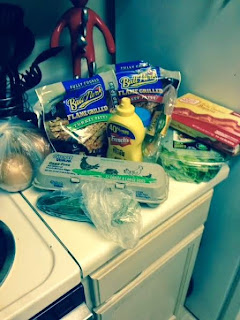 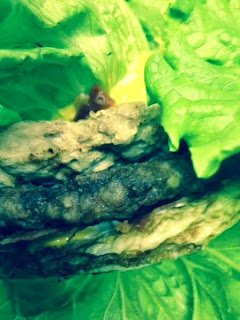 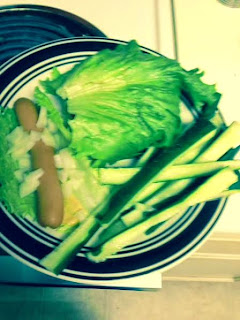 Finally, I had a craving for a burger and had quite a few calories left so I threw together a bread-less hamburger/hot dog meal.  I used one turkey patty, one burger patty, bacon and a fried egg to make a giant double burger wrapped in lettuce.  I also made a hot dog with a lettuce bun.  Finally, I cut up a cucumber to resemble a fry shape and called them "cucumber fries."  I was reaching here but when all was said and done I had a huge plate of food and satisfied my need for a burger.

I hope you all have a great week. I'm sure I will have lots to report next week!