Howdy. If you live in the south, you know that summer is officially here.  It feels like walking in a bowl of soup during the day right now when you're outside and it ain't pleasant.  This is the time of the year when I do most of my exercising in the gym or in the morning because running in the afternoon in the heat of the Alabama sun is punishment that nobody deserves.  I am back to restricting calories this week but I am hoping to have a better attitude.  I was slipping away from the idea of only eating when I was hungry so I am going to use my Lose It app to make sure I don't eat out of boredom but that's the only app I'm going to use.  Before I read "Breaking Free from Emotional Eating," I was entering all  kinds of information in multiple apps and punishing myself mentally multiple times a day when I didn't do something perfectly.  Now that I've had a couple weeks to reflect I've decided to keep a calorie count but not beat myself up when I make a mistake.  I'm also going to continue to try and only eat when I'm hungry.  I'm going to stick as close to my calorie count as possible every day but if I mess up, I mess up.  If I'm too tired to do two classes at the gym, I'm only going to do one.  I'm also going to stay away from the scale a bit longer.  I considered weighing this weekend but when I thought about it too much I felt terrified so I decided to do well and wait until I feel like the number on the scale doesn't define whether or not I'm a decent person.  I know I sound dramatic but I've got some serious, scary, self-loathing behavior and I'm doing my best to work on that.  One day at a time, y'all. 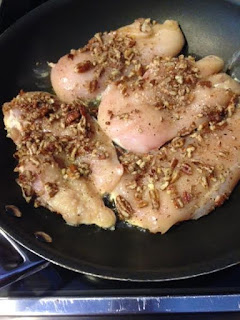 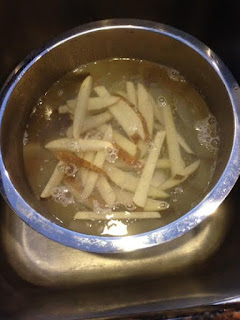 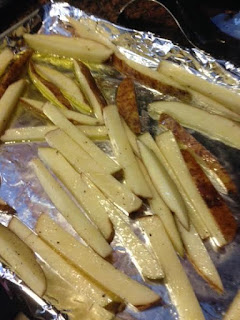 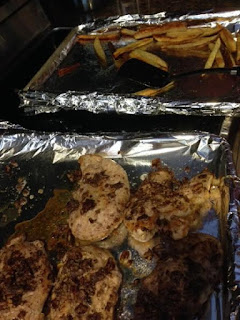 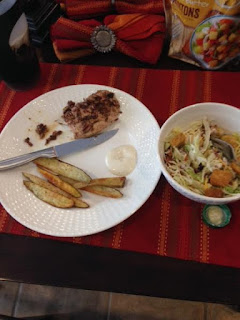 Last week, I went to the store and bought 4 large chicken breasts in an attempt to make Pecan Crusted Chicken.  Ian requested this recipe as he has had it before so I thought I'd give it a shot.  I took the four chicken breasts and cut each in half, leaving me 8 5-6 ounce breasts.  I made the chicken with oven fries and salad.  Both the chicken and the fries were pretty easy to make.  The next time I make the chicken, I will make the pecan pieces much smaller and marinate/flavor the chicken more.  All you do is dunk the breasts in egg, then pecan then fry them in a skillet for a few minutes on each side (I used a bit of olive oil) and then bake them for about 10 minutes.  For the fries, you chop up potatoes into fry shapes, soak them in water, toss them in oil, salt and pepper and then bake them at 475 degrees.  While the fries are baking make sure to rotate the pan a couple times and jostle/turn the fries once or twice so they get nice and crispy.  The chicken was cooked perfectly.  It was juicy and tender.  It lacked a bit in flavor but it wasn't bad.  The fries were delicious.  They managed to get crispy in the oven and they were a hit.  Because the chicken was missing pizzaz, I made the best out of the leftovers with several round two recipes. 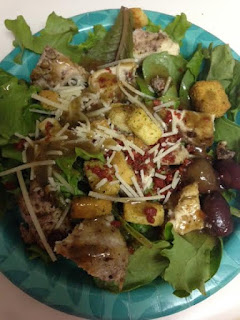 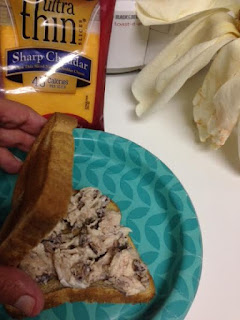 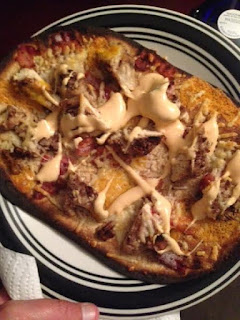 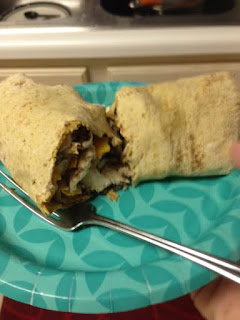 The first thing I did was add the chicken to a regular salad.  It added a nice bit of filling protein to the boring salads I'm used to having for lunch.  The second round of leftovers, I chopped up the chicken, added a bit of light mayo and garlic powder so I could make a chicken salad sandwich.  The pecans made it that much more savory and the sandwich was filling and delicious.  I also made a flatbread using the chicken, cheese, bacon and light buffalo flavored ranch.  I think this one was my favorite.  The flatbread was crispy and the ranch gave it a bit of a kick and gave it a buffalo chicken vibe  Finally, I made a wrap today that had the last piece of chicken, mustard, light mayo, bacon and thinly sliced cheese.  The wrap was huge so it was filling and honestly tasted just as good as a wrap from any deli.  I love amping up leftovers and for $26 worth of groceries, I was able to get 8 meals.  You really can't beat that.

I had an amazing week filled with music! I was able to see Dave Matthews Band, Ingrid Michaelson, Nelly, TLC and New Kids on the Block all in one week.  My Mom also took me to Ruth's Chris for the first time and it was honestly a life-changing experience.  I had to pay $160 because my car was towed after the Ingrid concert but honestly, compared to the rest of the week I had, it was only a minor blip in my fun.  I feel so fortunate in this life!