Pizza on the Brain

Hi All! I hope your week started off well.  I hate to brag but my Monday consisted of mostly time by the pool.  I'm house/dog sitting for my friend Nish so her dog Coco and I had the laziest day ever and it was nice. I'm trying to be a bit more productive now but I don't expect much from myself.  Last week I shared some epiphanies with you after reading a book called "Breaking Free from Emotional Eating."  This past week, I went diet free and attempted to trust myself to eat when I'm hungry and stop when I'm not.  It's funny because the concept is to stop thinking so much about diet and punishment but this week all I could think about was food.  Am I eating enough? Am I eating too much? Do I feel light?  Well, I would say until yesterday I did really well with food.  I ate healthy all week and I felt as if I only ate when I was hungry and I stopped when I was full.  I had a couple of nights where I had too many drinks.  The problem is that when I don't eat as much I need to remember I don't need as much to drink.  Friday night, I was faced with Mexican food.  Mexican food and pizza are danger zones and this week I ate both (3 different kinds of pizza).  I did well.  What I ordered wasn't healthy but I ate a third of it and Cassandra and I had a lot of chips left in the only basket we got.  For me, this is a huge accomplishment.  I can eat two baskets of chips myself.  I had one margarita as well.  Later, when I felt hungry, I ate a bit more of my dinner.  I also went to a wedding. I kept my portions small and didn't eat cake (though I really wanted to).  Yesterday was the only day that was questionable.  I ordered Dominos and I would say it was somewhat successful because even though I ate past the point of being satisfied, I only had two pieces with two breadsticks.  This may sound like a lot but believe me when I tell you if I put my mind to it I can eat 5 pieces of pizza plus cheese bread.  If it's a thin crust, I can eat the whole thing.  So, limiting myself to two was a big accomplishment.  Today, I ate one piece and one breadstick for lunch.  I'm trying to get rid of the stuff.  Sunday dinner with the family was the worst.  I went way overboard with mac & cheese and felt pretty miserable and guilty afterward.  Not sure how I'll combat that meal but I'm a work in progress as usual. All in all, I noticed places for improvement and I'm still terrified of gaining weight and my body image is not where it needs to be but I think this is a positive experience so far.  It's what I need right now.  Like I said, I'm not saying I will never diet again but I'm going to try this for awhile and stop punishing myself.  I hope you all give yourselves a breather sometimes too.  Even the easiest life is hard sometimes. 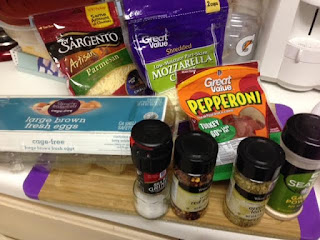 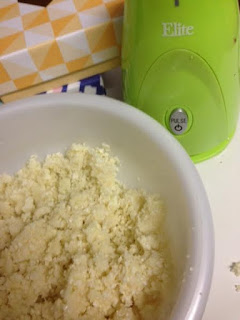 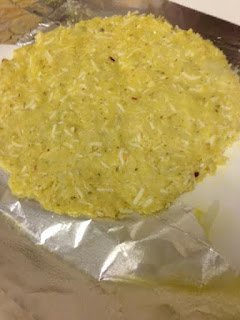 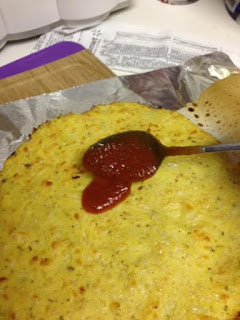 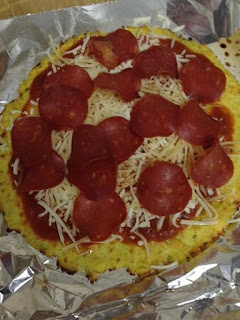 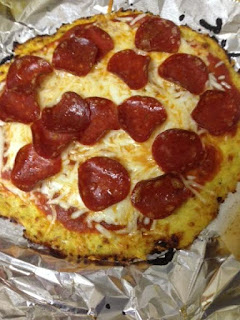 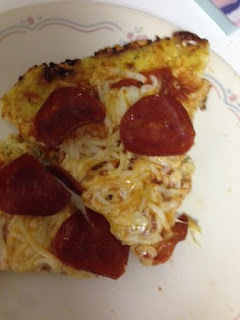 As I mentioned above, I had three types of pizza.  Dominos isn't exactly a beacon of health but I made two pizzas last week that won't leave you feeling guilty.  The first was a cauliflower pizza.  I took a break on cauliflower for awhile because I was a bit burned out.  I have tried to make cauliflower tortillas in the past and it was a giant fail but I was determined to make a cauliflower pizza crust so this time I meticulously obeyed every detail and it turned out really good! I will say if you detest cauliflower, I still don't think you'd like it.  Cauliflower has a taste for sure.  If you're on the fence about it, give this recipe a try.  Processing the cauliflower is kind of a pain but other than that, it's not too difficult.  All you do is take fresh cauliflower (you'll want 2 to 3 cups) and put it in a food processor to make what they call cauliflower "snow."  It needs to look almost minced.  Then you heat it in the microwave and once it's cooled, you wring out the excess water with a towel.  Get out as much of the water as you can.  Once you do that, you combine it with one egg, 1/4 cup mozz, 1/4 cup parmesan and whatever spices you want.  It will become a consistency that allows you to mold it.  Put it on a baking sheet that is sprayed with Pam and lined with aluminum foil and parchment.  Push it out into a circle that looks like a crust.  If you have a pizza stone, slide the aluminum and parchment onto it, if not just pop the pan in the oven. Bake the crust a few minutes (350) and then take it out and apply toppings.  Pop it back in until it's all bubbly and brown.  Let it cool. Enjoy.  The edges were crispy and the cheese was yummy.  I won't make it all the time because like I said, it's a bit of a mess and kind of a pain but it would be a great recipe for kids (young or old) if you are trying to hide veggies in their food. 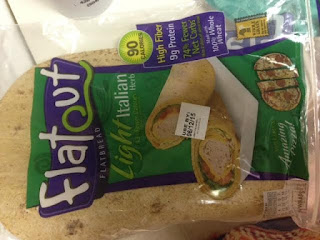 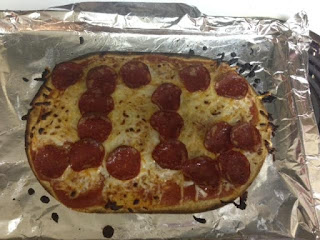 I also made a pizza that you can be done with in 5-10 minutes.  I found these big flat breads in the deli section at the store.  They are only 90 calories and are huge in terms of diet bread.  All I did here was turn the broiler on, put the flat bread on a cookie sheet that I lined with aluminum foil and sprayed down, topped with pizza sauce, light mozz and turkey pepperoni and broiled until it was browned and the cheese was melted.  I put the pepperonis in the shape of Ian's initials because we shared it.  It was cute at the time but now it feels a bit embarrassing.  Anyway, I was starving after a couple cocktails Tuesday.  He and I shared this and it hit the spot.  Can you imagine how many calories I saved by making this instead of getting a Baconator like I have so many times.  It's delicious too! 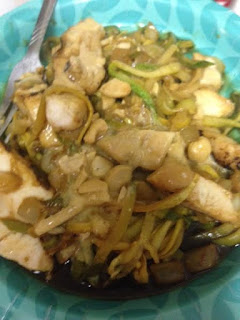 Finally, I have a quick throw together that is a departure from pizza.  I have shown this before but I wanted to remind you again since it's so yummy.  Zucchini and squash aren't really allowed on the slow carb diet so it's been awhile since I had it.  I used my veggie noodle maker and made cashew chicken "Lo Mein."  It's so easy to sauté the "noodles," add chicken that is cooked already, soy sauce, peanut sauce and a few cashews.  I even drizzled just a TINY bit of shrimp sauce on top.  It's like I'm getting Japanese food at home and it's so much better for me! I hope you all have an awesome week!