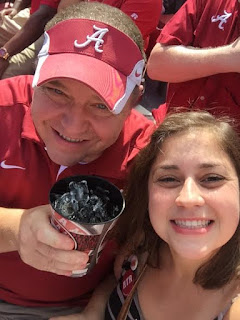 Hi Everyone! Roll Tide! Tuscaloosa had its first game day of the season and it was a bit too much fun.  The bad news is that I gained 3 pounds last week and I have no idea why. I did eat my cheat meal the night before I weighed but 3 pounds seems like a hefty punishment, especially since I didn't stuff my face with my cheat meal like usual.  I even saved half for later.  I was perfect Monday-Saturday last week.  Yesterday, I wouldn't say I was perfect but I helped Ian's mom move for hours and burned about a million calories so I would say I was pushing perfect the whole week.  I have been working so hard and eating right so that 3 pounds was a disappointment but I didn't spiral like normal.  I took it in stride, even making it through game day without cheating.  I'd say that's progress.  I'm going to work hard again this week and hopefully the numbers will be nicer this time. 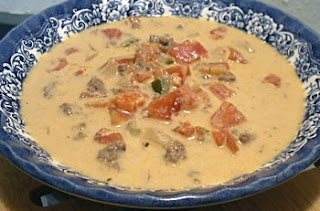 This week I made creamy taco soup.  I've made taco soup before but this version had cream cheese and half and half in it.  It added calories but made for a nice touch.  I also used ground chicken instead of beef.  I totally forgot to take a picture but wanted to post it anyway so found a random pic on the internet that looked similar.  Ian really enjoyed it and added Fritos.  Next time I will probably leave the creamy factors out just to save calories but a heaping cup of the creamy taco soup was about 200 calories and it was delicious. 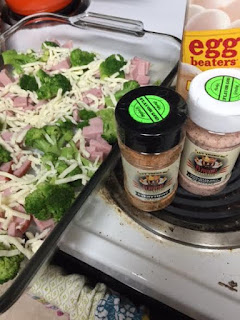 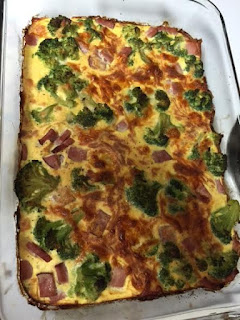 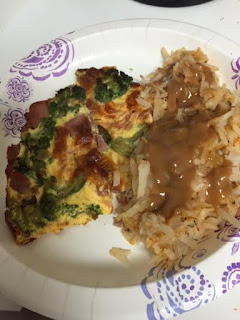 I also made broccoli ham casserole.  This couldn't have been easier and it was pretty tasty.  All I did was take chopped ham, broccoli, a bit of low fat mozzarella and throw it in a casserole dish.  I covered it all in egg beaters and baked it.  It was essentially a crustless quiche.  I threw on some of Flavor God's Everything seasoning and the Himalayan Pink Salt.  I served it with a side of hash browns (which are only 70 calories for a whole cup) that I topped with my Thai Peanut sauce.  It was delicious! I have to say making both the taco soup and casserole this week came in handy because I had a ready made lunch and dinner for school on Tuesday and Thursday saving me time and money! 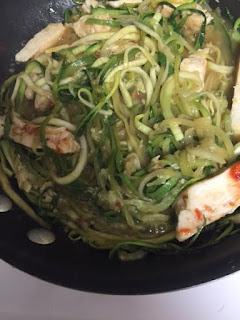 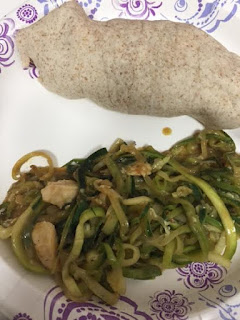 Since I was trying my best to be good on game day, I made lunch before I went.  I took my zucchini "pasta," threw it in a skillet with some chicken strips, chili garlic sauce, peanut sauce and soy sauce.  Once it was sautéed, I stuffed half of it in a low carb wrap and put the other half on the side.  I made sure to eat the whole plate so I would be full and not tempted by tailgate food.  It was delicious, filling, healthy and I didn't go near the food at the tailgate.  I made it through one football game day in Tuscaloosa, only 6 more to go!

I want to give my Oma an early birthday shout out! Happy Birthday!

Until next week, y'all! Alabama plays Ole Miss Saturday and it's going to be a big game so ROLL TIDE!