Football Season is the Devil

I will jump right in today.  First, I will say that my weight stayed about the same as the week before.  I had two great weeks in a row then after the random 3 pound weight gain, I'm feeling all depressed again.  I ate too much this weekend but I'm back on today.  A lot of my clothes are tight and I can't seem to stay motivated.  It's hard because I am currently exercising in some capacity 7 days a week and other than a bit of a spiral yesterday, I'm doing my best to keep the food intake low.  At this point, I can barely maintain, let alone lose.  I know it's my fault and I'm trying not to beat myself up but that's usually the reaction I had.  I am lending partial blame to the heartbreaking loss Alabama had on Saturday.  I woke up Sunday wanting to drown my sorrows in food. 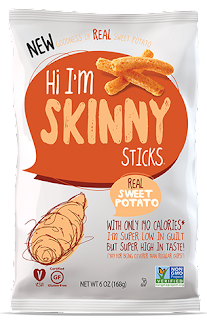 I don't have much today because I haven't been cooking the past week because I need to go grocery shopping.  I did want to share one of the snacks I got from Fresh Market that I forgot to mention.  These are sweet potato skinny sticks.  A couple things: 1) if you don't like sweet potatoes, you won't like these, 2) If you are sensitive to what some might call a "diet taste," you also won't like these.  Now that I've made them sound amazing, I will say that I like them as a quick snack, especially on a long day on campus.  I can grab them quickly because they are easy to count and stuff in a bag.  They've got a nice, salty taste and I usually eat about 13 for 70 calories.  I bought two bags because they were buy one get one free so it may take me awhile to get through them.  At some point, I'd like to try dipping them in some yogurt or something for a more sweet/salty vibe. 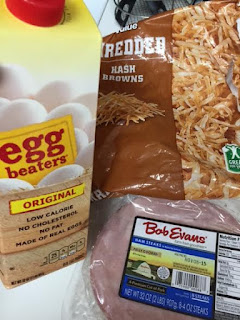 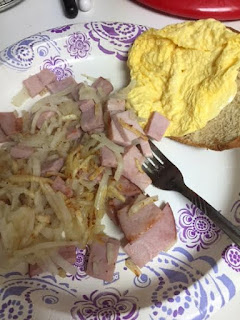 The other thing I wanted to do is remind you how much I love shredded hash browns.  I'd actually forgotten this myself but going through my old blogs one day, I noticed that I used to eat them all the time.  I know they aren't "clean" but you can have a cup of shredded hash browns for 70 calories and when you are looking to fill up your belly, it's nice to know that you can indulge with some potatoes with your breakfast without spending a lot of calories.  I either heat them up in a skillet or throw them on a pan under the broiler.  I use Pam so they won't stick and add salt and pepper.  This week, I mixed them with a ham steak and added two pieces of toast (sadly no butter), and some egg beaters and the whole breakfast was around 300 calories.  I don't usually spend that much on breakfast but I've been trying to get a few more carbs in my before heading out to game day so I won't feel hungry.  It was a delicious combination.  It felt like a "real" breakfast.

Hopefully Alabama will be able to relax and bounce back this week as they play La Monroe.  Roll Tide Always!

Finally, Dad and I are going to see Taylor Swift on Friday night in Nashville and to say I'm excited would be a massive understatement! Can't wait! Thanks for the tickets Dad! Until next week y'all.