Well, Roll Tide y'all! Not only did Alabama win their first game of the season, I was down 2.4 pounds this week. This was the motivation I needed! It's been WAY TOO LONG since I saw that kind of drop on the scale.  Other than me stretching the limits of a "cheat snack" during the game on Saturday, I had a perfect week.  It's also been quite awhile since I could say that.  I worked hard last week and it paid off.  My goal is to continue that trend this week though it will be tough since it will be the first game of the season but I think I'm ready.  I know I won't see loss like that every week but I want to keep on keeping on no matter what the numbers say. 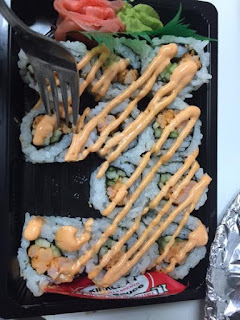 Ian and I took a step up in our relationship because we bought a Sam's Club Membership last week. For me, this is a huge deal.  I've been wanting a membership for years and now, I have the privilege of buying a whole pallet of popcorn.  Sam's is like a wonderland to me and I can't wait to save money on gas.  Not only did we become members of Sam's, we have visited Tuscaloosa's brand new Fresh Market a few times.  I am completely obsessed with this place.  I have to watch myself in there because my budget can't handle all of my desires.  The first place I went to was the sushi cooler.  Sushi is something I NEVER thought that I would eat but over the past couple years, I've become more and more fond of it.  I'm not too adventurous with super fishy and/or raw sushi but it's something I enjoy.  I was excited to have this sushi because I was able to scan it and get the calories which is rare with sushi.  The whole tray was 290 calories so I gobbled it right up and it was delicious. 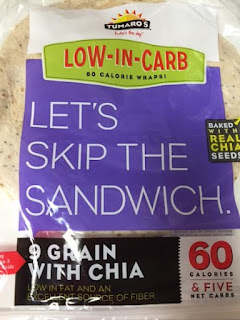 I also bought some low carb wraps.  These wraps are only 60 calories each and I've already eaten all of them.  I made pizza and buffalo chicken wraps out of them and they were great.  I would recommend making sure that you add plenty of flavor to low carb wraps because while they are great vessels, they are essentially flavorless. 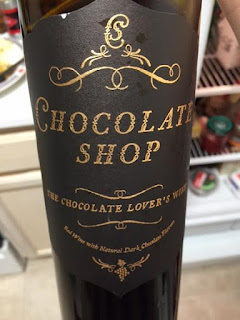 One thing I'm not sure about was the chocolate wine I purchased.  I love wine and chocolate so I thought this was a no brainer.  Honestly, it was a bit weird.  It tasted like I took chocolate syrup and just poured it into the bottom of the glass.  It was very rich and I prefer my wine a bit light and fruitier.  I'm sure at some point, I will choke it down but I won't be getting it again. 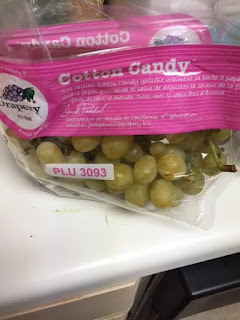 I had heard a lot about cotton candy grapes so I got some.  I guess I am just not so into fruit that I'd rather use 100 calories on grapes than some other snack.  They were good in that there weren't any sour grapes in the bag but saying they taste like "cotton candy" is a bit of a stretch.  I like grapes OK but they've never been my favorite.  I ate all of these so I didn't waste them but I probably won't get them again. They weren't bad but they weren't amazing either. 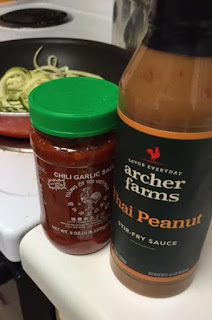 As I've mentioned before, I'm really into Asian flavors right now.  I found this chili garlic sauce at Fresh Market.  I combined it with some peanut sauce I got from Target and my zucchini "pasta" to make a quick "Lo Mein."  The chili garlic sauce is great because it adds a lot of flavor and it's calorie free but go easy on it because it has quite a kick.  I loved this combination of flavors and plan to use it for many other recipes. 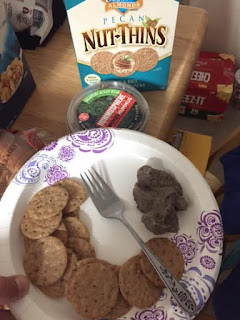 The last thing I wanted to show is the Jalepeno Black Bean Hummus and Pecan Nut-Thins I bought.  The hummus is flavorful and low calorie.  The Nut-Thins are cool as long as you are dipping but definitely have a diet vibe so they probably aren't great by themselves.  You get a lot for the amount of calories you are using so they are great for that.

I am certain that I will be going to Fresh Market a lot because I love trying new, different groceries.  They have an overwhelming amount of food to choose from.  I hope you all have a wonderful week!
Posted by Heather Wyatt