Hey y'all! I hope everyone had a wonderful Memorial Day weekend! As always, I am deeply grateful to the men and women who have given their lives protecting out rights and freedom. It is an unimaginable sacrifice that deserves more than we could ever give back. Because Memorial Day has come and gone, that means we are almost in June. Summers have always gone too fast but now that I'm a teacher, I'm reminded of just how quickly they can pass by. It seems like yesterday I was uploading final grades. That's not to say I haven't kept busy. I'm writing and working on Fall classes already. In addition to that, I'm teaching an online class all summer that started yesterday. Sure, I have  a more flexible schedule and I'm not complaining but in terms of sitting poolside all summer with an umbrella drink like I envisioned before I was a teacher, that's not really a thing. Oh well, I still have it pretty good. 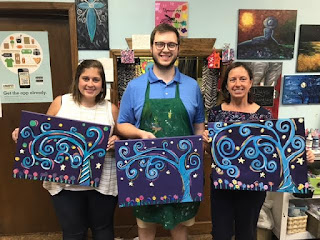 On Friday, my mother, brother and I went to a place in town called Uptown Art where you follow the  instructions of a teacher and paint whatever painting they have set up for that day. This was the mother's day gift I got my mom. She has an artsy side and though I can formulate some decent sentences, I've never been the "artsy" type. I have zero patience so once I realized my painting was going to resemble that of a child in 2nd grade, I gave up. I was done at least 30 minutes before everyone else. Having said that, we still enjoyed ourselves. We had a nice dinner before and drank wine while we painted. I know my mother loved it so that's all that matters. Plus, I even hung my "art" up in the hallway. 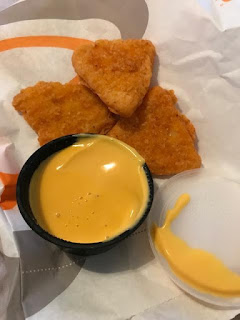 There are some people in life who get their kicks by trying new and exciting things. For example, my mom and brother are going skydiving this week. Well, you know, sometimes I try new stuff too. What was my exciting venture last week? Trying the new naked chicken chips at Taco Bell. I know, I know, CRAZY RIGHT?! Well, actually, in the midst of hot dog stuffed pizza crusts and macaroni stuffed cheese puffs, these chicken chips aren't that exciting. I wanted to try them though. I know, I know, I'm supposed to be eating healthy and I TOTALLY AM...or at least, I am trying but I needed to know what this was all about. If you haven't seen the commercial, Taco Bell is offering what are essentially triangular chicken nuggets with a side of that beautiful, luscious, fake ass orange cheese. Because I'm a lover of junk, I was a fan of these. The nuggets had the same quality meat as any other nugget in the fast food world. They also had a spicy kick. Dipping them in the cheese was a fun time too. I'm someone who usually only visits Taco Bell a few times a year late at night. These naked chips didn't really change that but I was satisfied with them all the same. Give 'em a shot. 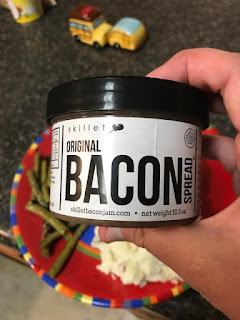 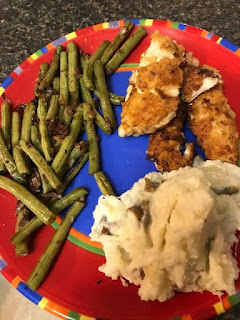 Since I need to at least pretend like I eat real food sometimes, I wanted to show you my latest Blue Apron meal. Well, really, I wanted to just tell you the way I spiced up the green beans. Growing up in the south, I didn't know that green beans could be served any other way than out of a can then cooked to death in some type of pork flavoring. In the past decade or so, my mother has introduced the family to what we call "yankee green beans" which just means fresh or frozen. At first I rejected these crunchy, bright green imposters. If your green bean wasn't flat, soft or salty, it wasn't a green bean. Because my mom is a great cook, I've come around to the idea of a fresh green bean sautéed in a pan with lots of flavor. I still prefer them as cooked as long as possible but I will admit I enjoy them now. Well, Blue Apron sent me some green beans. I've never made them myself and all Blue Apron said I needed was about a teaspoon of oil and a little salt and pepper. Um, no thanks, Blue Apron. I'm going to need to jazz them up a bit more than that. A few months back, I ordered some bacon jam on a whim in hopes to mimic a life-changing bacon jam I'd had on a burger in Birmingham. It didn't quite have the same effect at home. The jam had hardened and wasn't that appealing in terms of aesthetics. What I realized yesterday though was that it almost resembled a bouillon. So, I took a big spoonful of that and through it in with the green beans and Y'ALL! It has less calories than oil and is packed with bacon flavor. Those green beans were on point and the diced shallot mixed with white wine vinegar (courtesy of Blue Apron) added another layer of flavor. Sometimes, eating vegetable sucks but when you can jazz them up, it's an awesome little surprise.