I have yet another busy weekend in store but it should be a great one! Before I tell you about that, there are a couple random things I would like to share. First of all, I am always prepared as far as snacks go because you never know when you might feel like you are starving. I like to keep 1 point snacks around so I don’t end up at the vending machine. Well, I ran into these 10 calorie, zero point Jello snacks...

First of all, I want to know where the heck to find the flavors in the picture. The picture shows a raspberry and orange pack. I haven’t seen that anywhere. I’m not the biggest Jello fan but if I feel like I’m hungry, I can eat 1 pack and not have any points taken away. My favorite flavor is orange. I like strawberry OK but I HATE lime and cherry. Well, all I could find was a lime and orange combo pack. I decided I would choke down the lime to get to the orange since they only had combo packs. I get it home and there are FOUR lime’s. I mean...gross. Anyway...they are good in theory but I won’t get them again unless I can find one or two flavors I will eat in one pack.

Now for a total shift and a random TV update. 1) You know how I went totally gaga over that new Breakthrough with Tony Robbins show? Well, I’ve already given up on it. I can’t ever find it on and I can’t search for it on my TV to DVR it. I don’t understand why it’s so hard to track down but it wasn’t awesome enough to justify stressing out over it and the second episode wasn’t that great at all...lol...so I’m done with that. 2) After waiting way too long, Cassandra and I finally added HBO and Showtime. I’m so excited because even though my parents are very gracious to let me watch my shows at their house, it will be nice to not have to go anywhere just to watch TV. I don’t need to spend any extra money but many of my favorite shows are on HBO or Showtime. We got it just in time for the premiers of Weeds and The Big C...YAY!

Ok-I think that is all of the miscellaneous comments I wanted you to read. As far as this weekend goes, as usual, I will be eating good food and hanging with my family and friends. I get to see Jordan, so that’s always nice! I am also going to help stock the “Grotto” which is the place where I go to tailgate. Some friends of mine rent an apartment right next to the stadium and that’s where I go before and after the games. I love the atmosphere there and since football season is so close (SO FREAKING READY AND EXCITED), it is time to stock it up so it will be ready. 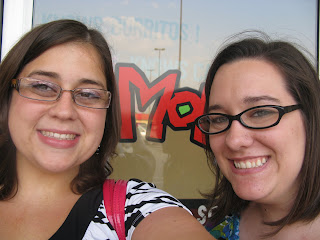 Nichole is moving to New York for school and I am so happy for her but we will miss her!!! The picture above, if you can’t tell, is of me and Nichole at Moe’s. Sure, this picture is kind of embarrassing and so is the fact that Moe’s is probably where we’ve spent the most time together since we lived in the same house, but it is going to be weird not going there with her. I met Nichole in college...we worked together and became friends. We are both crazy and she accepts all of my idiosyncrasies...so that’s always nice because I have a lot. She’s going for her Masters and her PhD. I know she will do awesome! Good luck Nichole! I will DEFINITELY be visiting (mostly for selfish reasons) you!

There may be pictures to post next week from the weekend. I am not sure that I will have as big of a weight loss as I did last week but it shouldn’t be bad. I hope you all have a fun, relaxing weekend! Bye!

I wanna wake up in a city, that doesn’t sleep
And find I’m king of the hill - top of the heap
These little town blues, are melting away
I’ll make a brand new start of it - in old New York
If I can make it there, I’ll make it anywhere
It’s up to you - New York, New York

New York, New York
I want to wake up in a city, that never sleeps
And find I’m a number one, top of the list, king
of the hill, A number one

These little town blues, are melting away
I’m gonna make a brand new start of it - in old New York
And if I can make it there, I’m gonna make it anywhere