I know it’s Monday but I hope that you aren’t having a typical one...I hope it’s better! Mine has been OK...I’ve been highly productive but I am pretty tired. I have been staying at my parents while they are out of town and I did NOT sleep very well last night. Dixie, the Springer Spaniel that’s about 14 years old cried constantly all night and my other dog, Pacey, snores like a grown man...plus...they keep it WAY too hot in their house...anyway...I had a lot on my mind and I couldn’t sleep but surprisingly, I am feeling OK...I’m just not excited about walking in this heat tonight. It seems like I haven’t blogged on a Monday in a long time but I guess that’s because I usually make my recipes on Monday nights and blog about them on Tuesday but last night, I made my recipe for my Oma... 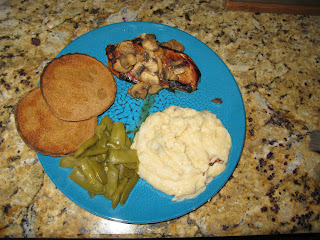 I made Balsamic Chicken with Mushrooms & Bacon Cheddar Mashed Potatoes. Both of those were Weight Watchers recipes and then I added some green beans and bread to go with it. The chicken was great. I was worried I over cooked it but it turned out pretty tender and the mushroom sauce gave it nice flavor. The chicken is initially marinated in a Balsamic & Dijon Mustard sauce and then you top it with the mushrooms. It was pretty tasty. The potatoes have bacon and low fat cheese and they are made creamy by adding fat free milk & sour cream. They were also quite good...adding the crispy bacon made for a nice touch. It was a good ‘ole comforting meat & potatoes meal. Very filling!

We balanced out the healthy meal with Cold Stone Ice Cream. I was SO excited because it had been forever since I had it. I really liked the way my new system of one cheat meal on Saturday and one on Sunday instead of cheating all day Sunday turned out. I think that I will definitely stick with it. I allow myself one cheat meal per day, one cheat dessert on ONE of the days and 15 points. Plus, I add whatever activity points I get so if I want more food...I have to earn it. It worked out really well. I weighed Saturday morning and I was right at about the same as I was a couple weeks ago when I was down 67 so my 2 or 3 slip-ups didn’t hurt me too bad. If I do well this week...I might even lose some on Saturday morning!

I had a good weekend. It was a very busy one and I kind of wish I had the opportunity to rest a little more but it was productive and fun. I got to hang out with some friends and Oma and we ate good food so I’d say that’s pretty satisfactory. Oma & I went to Wal-Mart Saturday morning. Saturday mornings are ALWAYS crazy at Wal-Mart, especially right now as school is about to start. We were going to check out and right in between the checkout lines and the school supplies in the front of the store was this... 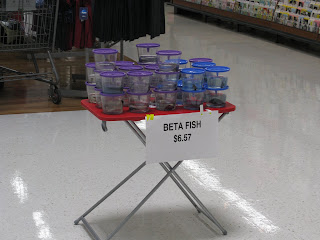 Now, does that look smart to you...a bunch of fish in plastic containers sitting on top of a flimsy TV tray? One bump and all of those poor beta would be flopping all over the place. Leave it to Wal-Mart to do something stupid like that.

Anyway, one good thing about staying at my parents by myself is that I get to hang out with Pacey... 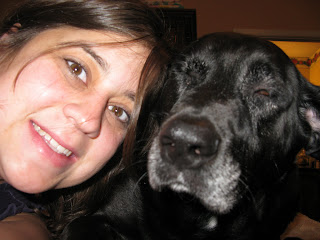 He’s so sweet. Every once in awhile...he is lovey-dovey when he doesn’t want anything. Most of the time, he’s only nice when he wants outside or a treat or dinner but from time to time, he will snuggle up with you for no reason at all. He’s not a huge fan of having his picture taken though. I usually have to force him because he tries to turn his head when he sees the camera.

I think that is pretty much it for the day. I don’t have anything else to report so I will end it here. I have you have a fine afternoon and evening! Bye!

You’re the hope that moves me
To courage again
You’re the love that rescues me
When the cold winds, rage
And it’s so amazing
’cause that’s just how you are
And I can’t turn back now
’cause you’ve brought me too far.” I Need You-LeAnn Rimes
Posted by Heather Wyatt