I’ll be up front with you, I’m not in the best mood. Today is not the day that I want to be messed with…I weighed this morning and the scale showed that I was up a pound. I feel very bloated and pudgy and I have felt that way the past couple of days. I know a hundred pounds doesn’t come without a fight…it ain’t easy but I really hope I don’t hover around it for too long. Not only am I 1.8 away (I’m ignoring the number on the scale this morning because I did everything right this week and lowered my caloric intake so I’m pretending that I weigh the same) from losing 100 pounds, I’m also hovering around another number that I’d like to get comfortably away from. The thing is, I want to lose as much as possible by Easter Sunday because that day begins a season in which there will be more cheat days than usual. Easter, Cinco de Mayo, I will cheat for at least 3 or 4 meals during my birthday week, a beach trip and then the whole fat tour of America will end in New York City, a place known for pizza and hot dogs…my favorite foods. I plan on being diligent with my diet in between those slips and as always, I will maintain my regular, rigorous exercise routine so I’m hoping not to gain too much but I want to get down a little more before I enjoy all of that food. Maybe I will miraculously feel extra light again one morning this weekend but if I don’t, I will press forward as usual and try to knock off that 1.8 that is lingering around like the smell of rotten trash. Of course, I am trying to remind myself that I am still ahead of schedule and I have friends and family to encourage me and one week means nothing and blah, blah, blah…I’m just not in the mood. I’d rather soak in all of the disdain…I’d rather just be unpleasant and grumpy…it doesn’t mean I’m going to binge eat or give up like in the past…it just means I will have a furrowed brow all day and look down at my belly in disgust and scold myself…I’m fine with that…I will do my best to be pleasant to others and that’s about the only task I have charged myself with today.

I guess this is the more real side of the weight loss struggle…not every day is a peachy and perfect experience. I tend to overreact to the scale and I bounce back quickly but that doesn’t mean I don’t get downright irritable when I don’t get my way in terms of weight. I think my overreactions are actually quite annoying, especially because I have been fortunate to lose weight most weeks when I am a good girl. When my family and friends feel the urge to roll their eyes and punch me in the face because I’m whining that I didn’t lose another 3 pounds this week, or hit 100, or stayed the same, or when I gain, I hope they remember that I am only pouty because for two years now, I have increased the amount of work I do little by little and I am at the point now where I literally bust my butt. I have never worked harder on a project in my life…I have done a complete 180…I have totally changed my lifestyle and even though I go kicking and screaming sometimes, I miss out on a LOT of food and drinks that I would love to have all for this…to change my body, to become more healthy. So, yes, even though this happens to everyone, this is what it is really like, it isn’t always pleasant and I will ALWAYS be disappointed when I don’t lose…especially when I’ve given a flawless performance. So, take what you will from these words…just know…if you are also at that place…my best advice…don’t fall apart…use this anger and turn it into a fierce competition with your obstacles. That’s what I’m planning on doing. I am in control of the situation, don’t lose control.

I will transition now to a less hostile tone. My friend Amanda convinced me to join an adult kickball league and despite the fact that it was kind of expensive, in Birmingham, and I haven’t played kickball for probably 15 years, I thought I’d give it a try. The first game was last night and even though it was 9 and I didn’t get to bed until almost midnight, I found it to be pretty fun. It’s a coed league and most everyone is in my age range. The atmosphere is really laid back. Of course, because the universe wouldn’t have it any other way, I was shaking hands and introducing myself with a couple of people when I suddenly see fear strike in their eyes because they didn’t know how to protect me from the kickball flying right at my head at 90 miles per hour. One guy did try to stick his hand in front of my head but it was too late. Let me just say, these kickball’s are not the kickball’s that you remember from elementary school. These things are giant, heavy, round balls on a violent mission. The ball hit me right in the side of the head…honestly, I think a few things dislodged in my brain. Luckily, I have a pretty intense skull and I recovered quickly…I was embarrassed but I later found that there were a lot of kickball related injuries. People fell, got hit…it was pretty intense. Luckily, I played second base and I basically played dodge ball rather than kickball while the guys on the team would run to my aid every time a ball got anywhere close to me. I like getting to kick because unlike softball, I always make contact. I didn’t get to base but I got my teammates to other bases my second time up. It’s a fun game…I think I will enjoy the rest of the season. I included a picture below that I’m not crazy about but it’s me and Amanda on the field during the game. Thanks for supporting and taking the pic Jordan! 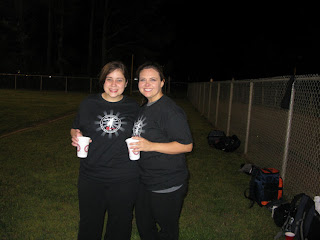 I have one word to describe how I feel about Pia getting kicked off of American Idol last night and that word is ASSININE. I voted for her multiple times so it’s not my fault but there is no justifiable reason that she should’ve gone home. I worry about her career since she finished so low and she’s not exactly unique in terms of female pop stars…she has an AMAZING voice but there isn’t much to set her apart from the other women out there right now who also have great voices…I hope she makes it though. I have this unsettling feeling that Scotty will win and I just don’t know…I don’t get it…he’s not for me but evidently, I’m in the minority.

Got another busy weekend coming up. Lots of errands and tasks to get accomplished.

Hope yours is awesome!

“What have I done? I wish I could run
Away from this ship goin' under
Just tryin' to help, hurt everyone
Now I feel the weight of the world is
On my shoulders
What can you do when your good isn't good enough?
When all that you touch tumbles down?
'Cause my best intentions keep making a mess of things
I just wanna fix it somehow
But how many it times will it take?
Oh, how many times will it take for me?
To get it right.” Get It Right-Glee Cast
Posted by Heather Wyatt