With a heavy heart... 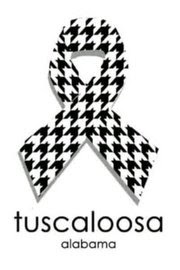 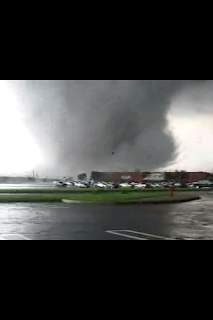 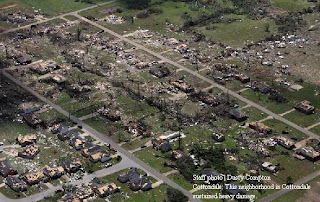 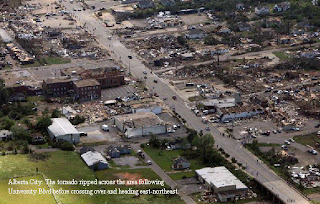 Since we last spoke on Tuesday, the city of Tuscaloosa where I live, along with multiple areas of the state of Alabama as well as several other states in the southeast experienced a tornado outbreak that caused more devastation and loss of life than I have ever seen. Wednesday afternoon, many of us around town were leaving work and preparing to batten down the hatches because the threat of tornadoes had been looming since the beginning of the week. When I grew up in Chattanooga, we didn’t really experience tornado threats. It wasn’t until I moved to Alabama that I realized what “tornado alley” really meant. I was petrified of the sirens and warnings and was so disturbed by the damage that tornadoes can cause. Over time though, I’ve learned to watch and respect mother nature but I’ve gained an understanding that there isn’t much we can do and I don’t get AS worried. So, Wednesday seemed like a run of the mill threat of bad weather. I was watching the weather diligently and when I spotted the storm that would violently trudge over four states headed towards my town, I knew things were a little bit different. As usual, I called my family to make sure they were ready and as I was watching TV, the tornado touched down in Tuscaloosa and I was watching it as it gained strength and right as he said it was headed toward Holt and Cottondale (my areas of town), I lost all power and communication. I couldn’t reach anyone so I just got in the hallway, put a pillow over my head and prayed for the best. It’s weird because even though my apartment complex didn’t get hit, I felt my heart sink and heard the wind of what must have been the tornado from a distance. Immediately, I was frantically trying to assess any damage and find my family. There were trees down around the apartment but nothing major. I finally got in touch with Jordan so he could tell me the storm had passed…then I got my parents and I knew we were safe. The past couple of days have been a whirlwind effort to make sure everyone I know is OK.

I’d like to ask for prayers for the Owens family, Wes Webber, Robert Rolston, the Elebash family, all members of the Tuscaloosa, Alberta, Holt, Peterson, Brookwood, Pleasant Grove, Huntsville, Decatur and Cullman areas. There are also multiple areas in eastern Mississippi and other parts of Alabama that I didn’t mention. These areas and people I mentioned that I know personally experienced complete devastation. I am heartbroken by the images and loss of life, especially the areas of Alberta and Holt…these are places that have been a major part of my life for 15 years and they are no longer even figments of what they used to be. Looking at the pictures and maps that show the path of the tornado, I know that my parents and I and my roommate Cassandra were VERY close to having damage or much worse. I feel so incredibly blessed, sad and uplifted by the outpouring of humanity…it’s been a roller coaster for sure. If you’d like to help, there are multiple places and sites to go to. You can go to www.redcross.org to find out how to volunteer and donate money or www.tuscaloosanews.com for more local updates and details. At this time, there are so many volunteers that they are sending people away as many of the areas are still dangerous but as of yesterday up until what I imagine will be several months from now, people will need help with clean up, they’ll need money, toiletries, clothes and other things. I had to work today but I plan to find out ways to help soon…so I may have updates for you on that later. I can’t count how many gut wrenching stories I’ve heard. It seems like everyone I know has heard 10 awful tales from other people they can share. If you can’t help, please just keep my town in your prayers. I am confident that we will rebuild and be better than ever but right now, we are all mourning the loss of our city and also the people that unfortunately did not make it.

The events from Wednesday have made focusing on other things difficult. It also seems trite to complain about the lack of power, the money lost in groceries, no cable and water and so I’ve been trying to keep that to a minimum but I am a complainer. We got power back last night and we are on a boil your water advisory from the city but we have our life and shelter so that is what matters. Despite my crazy eating habits on Easter and my substantial stress eating that happened yesterday, I managed to lose 1.2 pounds this week. I feel like that weight will come back at some point because I really don’t expect to just get away with my misgivings.

This weekend I will try to see if I can begin to help. I would also like to wish my parents a happy anniversary. On Sunday, they will have been married 29 years!

Thanks to everyone for their thoughts and prayers! Life will start to go on as we all work together! Have a nice weekend!

Are the wonders of my world.” Hometown Glory-Adele

“Been torn apart,
got so many scratches and scars,
maybe they won’t all go away,
but they'll fade,
maybe time can mend us together.. again.
It’s not what we've done but, how far we've come.