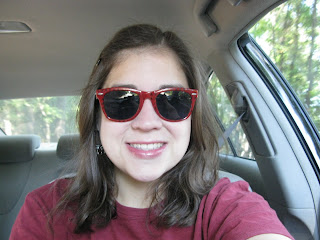 It’s FRIDAY! As always, I’m super glad the weekend is here! That is a picture of me posing in my mom’s Bama shades that she wore in the 80s. I think they are cute so I took the opportunity for a photo op. I weighed this morning before and after I ran and the results are in…I weigh about the same I did last week. It came as no surprise to me and you will understand too after you read about the cake pops I had last weekend but I’m a bit frustrated with myself. I’m also annoyed because I’m dealing with some stomach issues that certainly don’t help with my weight loss. It may not make too much of a difference but if I were on more of a “regular” schedule, I may not be so bloated and full of a week’s worth of food. Anyway, there are more pleasant topics I’m sure but with dieting and weight loss, there are some physical consequences. Most of the time, those consequences are good. I feel better, look healthier and I’m much more confident but my insides sometimes disagree with the amount of food I put in my body during the week versus the binging I sometimes do on the weekend. The way I feel today, like a basketball has permanently moved into my stomach, is motivation to do a better job on the weekends. I’ve been so weak lately. Luckily, I work my tail off during the week, so I’m not gaining but what if my lack of will starts bleeding into the week and it leads to a downward spiral? I know that sounds dramatic but if you’ve never been on a weight loss venture, you don’t know how fragile it all is. I am going to do my best to follow the rules that I set out for myself this weekend. There is no reason to go off track. I have GOT to start losing or I’m never going to make my January 15th goal. 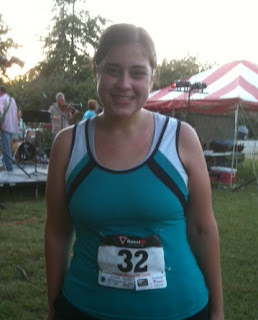 On a more hopeful note, I ran in my 2nd 5K last Friday night. I was distracted to say the least because the 5K was a bit disorganized and when I asked where it started, I was told the wrong place. By the time I realized where it started, I had to walk a good ways to get there and I could see everyone in the distance starting ahead of me. I was at least two minutes behind. I know you are on your own in a 5K but it definitely helps to have the encouragement of others who are running around you. I estimated that I went about a minute or so slower than my first 5K which is kind of a bummer but I figured between my two minute deficit and the fact that I was still breaking in a new pair of shoes, I had an excuse. I don’t really care so much about time, it’s just a nice feeling to know that I can jog over 3 miles without stopping. Three years ago, I could barely walk 10 minutes without having to sit down, so I’m proud of my accomplishment. 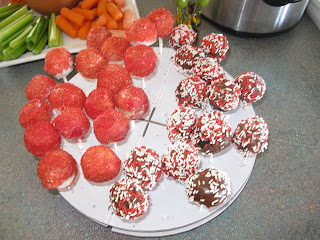 These cute little guys are a product of the craze known as cake pops. I didn’t lose weight and they had a little bit to do with that so even though I normally share healthy recipes, I thought I would show you these. I apologize if you’re on a strict diet but just remember the consequences of having too many of these…the scale will not be nice to you. I had my first cake pop a few weeks back after my roommate brought me one from a baby shower. It was delicious and so when my friend David invited us over for the game, he told me he was making all kinds of appetizers and I told him I’d take care of something sweet. I enlisted my mom to help me as I always do when I don’t want to do something myself. It wasn’t that they were hard to make but they were pretty high maintenance. Basically, you bake a cake, let it cool, crumble it up in a big bowl and mix it with frosting (with your hands). From the mixture, form several 1 to 1-1/2 inch balls and put them in the refrigerator overnight. The next day, take sucker sticks, dunk them in the chocolate you’ve melted and then poke the stick in the ball and dip it back in the chocolate. I probably won’t make them again because I found melting candies and chocolate to be entirely too temperamental and I don’t have time to handle attitude from my food. Also, they were very drippy making it hard to get the sprinkles on. You either put them on right away and everything dripped all over or you let them rest a second to allow the candy to harden before you put the sprinkles on and then they get all flat and ugly. Anyway, they ended up OK, especially after we got the hang of it and they tasted YUMMY! I especially like them cold. I’d try them and unfortunately have no healthy replacement suggestions with these. If anyone has ideas…let me know. 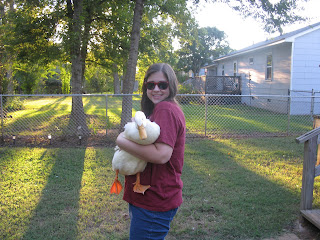 The before picture is from a few years ago at the hotel I stayed at in Louisville, KY while getting my MFA at Spalding University. The after picture is me holding one of my parents ducks after the game last week. Again, I’m happy to see these to keep me motivated! 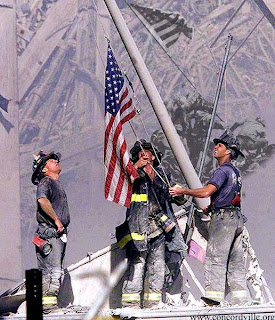 I made an oversight last week by not mentioning 9/11. I wanted to take a minute because after recapping that horrible day last weekend and spending the whole day crying on the couch, I thought that I would at least give a shout out to those who lost their lives that day and those who continue to suffer from the consequences of the events. No human should have to die in pure terror or pain and I pray for their families and friends!

Have a great weekend everyone and ROLL TIDE! We play North Texas tomorrow…should be a pretty easy win…I hope. Bye!
“Don't dream too far
Don't lose sight of who you are
Don't remember that rush of joy
He could be that boy
I'm not that girl

Ev'ry so often we long to steal
To the land of what-might-have-been
But that doesn't soften the ache we feel
When reality sets back in.” I’m Not That Girl-Wicked
Posted by Heather Wyatt