Well, I won’t waste time with chit chat today. I am not in the best of moods. I knew my weekend drink/eat binge fest would come back to bite me. I weigh the same as I did last week, give or take a couple ounces. I don’t expect I will lose too much next week either because we have plans to watch the game this weekend with my friend David and there will be multiple delicious game day fare going on. I’m going to make the ever-trending cake pops and see how they turn out. Hopefully, they will be delicious and worthy of a recipe shout out next week, despite their lack of healthiness.

Even though I didn’t do great last weekend, I had a fine week and I’ve been exercising as usual. In fact, I may even try to get on the scale again tomorrow because I am running another 5K this afternoon. We will see how it goes. Usually on Friday’s when I weigh and I don’t see what I want, I weigh again after I run but since I’ll be running tonight, I didn’t get that chance. It probably won’t make much of a difference but we will see. I am certainly on a slow track but I’m OK with that. I don’t want to gain though so I need to make sure I practice my typical diet and exercise discipline MOST of the time. I have until January 15th to lose roughly 16 pounds. That’s around a pound a week from now until then so I really need to do my best to keep everything in order. That goal is one that I set…I won’t spontaneously combust if I don’t reach it but I’d like to get there to prove I can still lose weight. 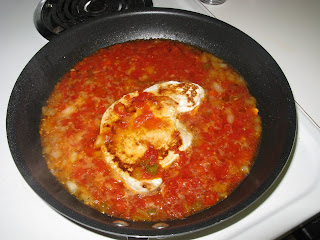 The recipe this week is Spanish Chicken and Rice but I changed it up A LOT. The recipe called for skinless, chopped chicken thighs but I am certainly a proponent for using what’s in my freezer before going out and needlessly spending money so I had no problem using the turkey breast I already had. It called for onions and garlic which I have no problem with and I always have so I used that. It called for chicken bouillon but all I had was the “Better than Bouillon” ham flavored stuff that’s lower in calories so I used that instead. The recipe called for mixed veggies, peppers and pimento but I used a can of Rotel tomatoes for spice. I used the quick rice and basically threw it all in a pan. I know it’s sort of pointless to call it Spanish Chicken and Rice…especially since I used turkey but the recipe was inspired by the Spanish Chicken and Rice recipe on skinnytaste.com and I again wanted to show how resourceful you can be even if you don’t have or want to buy every ingredient a recipe calls for. This was filling and packed with flavor and only took 10-15 minutes to make. 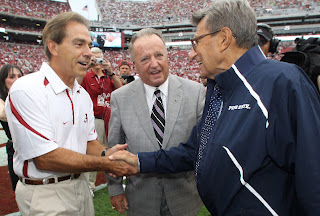 Alabama had no problems dominating Kent State last weekend though their performance was sloppy at best during several moments in the game. The challenge will be much more tough this Saturday as they meet Penn State for the second year in a row on Saturday. This year, Bama travels to their home turf at Happy Valley so this will definitely be a much greater test. I hope we win and I can’t wait to watch the game. 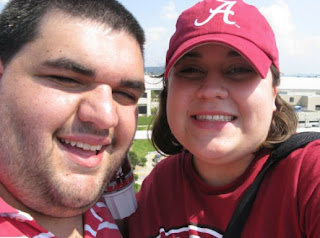 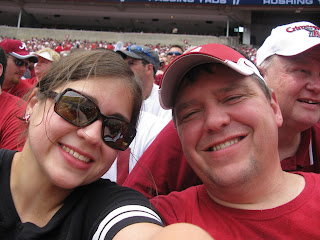 I posted a picture of me and Jordan at the Arkansas game a few years ago as the before and a picture of my Dad and I from the game last week as the after. This isn’t a great representation because it’s only my face but there is certainly less double chin and huge cheek action going on if you ask me. 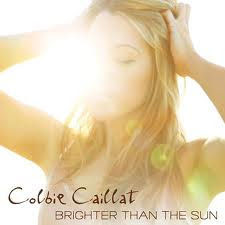 I have been posting a lot of Colbie Caillat lyrics lately because she just came out with a new album and I highly recommend it! I love her and her music is always good for lifting the spirits! Have a great weekend and Roll Tide, y’all! Bye!

“Stop me on the corner
I swear you hit me like a vision
I, I, I wasn’t expecting
But who am I to tell fate where it’s supposed to go with it?
Don’t you blink you might miss it
See we got a right to just love it or leave it
You find it and keep it
Cause it ain’t every day you get the chance to say