Back To The Basics...

Happy Monday y’all! Here we are again on the day that takes the most grief.  I hope your Monday is uncharacteristically great.  I am doing OK.  I’ll jump right in and tell you that I didn’t see much change in terms of the scale this weekend.  I’m still hovering between 6 and 9 pounds above my lowest weight.  I’m also still working my behind off in terms of exercise so nothing has changed there.   I think I’m going to go to a boot camp class this week that my friend does because it’s “bring a friend” week.  I’m a little nervous about it so if I go, I’ll definitely share how it went.

I have been doing Weight Watchers for about 3-1/2 years now and I’m very used to it but I realized that there are many times when I phone it in when it comes to nutrition.  Often times, I will opt for a serving of fat free chips because it’s easier than cooking broccoli.  In the same light, I’d rather grab a popsicle out of the freezer than go through the trouble of peeling an orange.  Because I usually go for the food that’s quick and easy, I’m filling my body with preservatives and food that lacks nutrition.  After doing this for several years, I am highly aware of how important a balanced diet is and I wanted to do more to balance my own.  After doing research for a couple of weeks, I have devised a system that is still rough and will probably need some tweaks in the upcoming days and weeks that I am going to experiment with.  I’m still going to count points on Sunday since that’s my cheat meal day but on the other days of the week, I am going to eat based on how the food pyramid recommends.  I’m sure you’ve all seen it but few of us actually do what it says.  The food pyramid tells you how much protein, fruits, vegetables, grain, dairy and fat you should have every day.  I divided the categories into groups and for each day, I will have the recommended amount of servings in those groups.  I have decided to try this until the new year begins.  At this point, as long as I’m still doing the same amount of vigorous exercising, trying out a diet that adds more fruits and vegetables can’t hurt.  I also decided that if I notice myself gaining weight, stop fluctuating and only go up in pounds or if I start cheating more and finding ways to justify eating bad foods, that I would go back to what I know best: counting points.  If I am successful and actually manage to feel better and lose weight by the time the new year rolls around, I will continue the new plan.  I want to change things up but I want to be smart.  My health is very important to me.  It’s more important than the number on the scale but the number does matter to some extent.  The number I used to have over 3 years ago meant that I was unhealthy and I never want to go back to that but I need to make sure that I’m doing as much as I can to get the nutrients that I need.  I’ll update you on any progress or non-progress that I have along the way.  Today is the first day and it’s hard to know for sure yet but so far, so good. 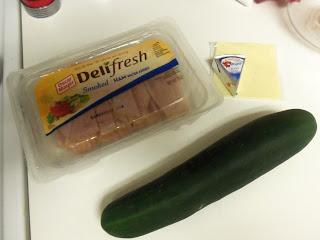 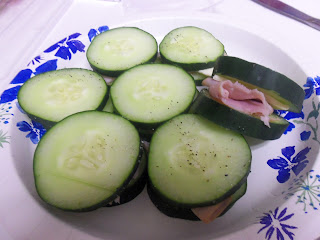 The recipe today is very simple and you must like cucumbers but I enjoyed it and it’s a quick filling, snack so I thought I’d share.  I love bread but as you know, it can be a dangerous thing.  I am almost willing to bet that I had half a loaf of bread myself with the dinner my mom made last night.  So, if you’ve had more than your share of bread for the day, tiny sandwiches replacing the bread with cucumber slices, will be a good snack for you to have.  In no way does the cucumber replace the bread but it’s a nice snack nonetheless.  It couldn’t be more simple, either.  Just slice up the cucumbers and add what you want in between them.  I used Laughing Cow cheese, deli meat, salt and pepper and they were quite tasty. 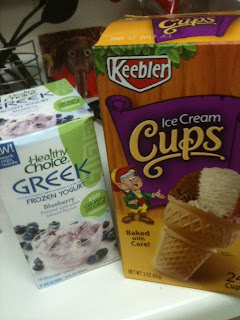 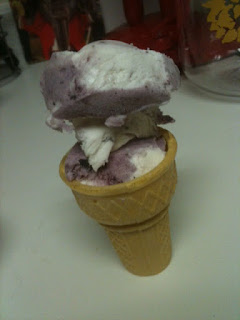 I also wanted to share a new product that I found.  It’s Healthy Choice’s Greek Frozen Yogurt.  I got the blueberry flavor.  I love frozen yogurt and Greek Yogurt is the new health food fad so I tried it.  I also put it in those small cones that are only about 15 calories a piece to give myself an ice-cream-like treat.  The yogurt tasted great.  This sounds odd but the texture makes it so that if you don’t bite into it (which I can’t do because I have sensitive teeth) and just lick it, it takes FOREVER to eat.  This is a good thing because eating is mental.  If you eat a fun-sized candy bar, there isn’t much satisfaction because it takes 2 seconds to eat but if you eat this frozen yogurt off of a cone, it will take you 10 or 15 minutes to eat it and in your head you feel like you’ve gotten much more out of the snack than you actually have. 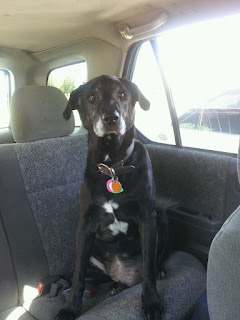 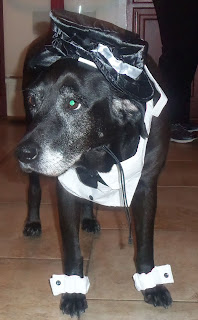 Well, I think I told you last week that my dog, Pacey was having a tumor removed.  He made it through surgery fine.  The tumor was 3.2 pounds.  The doctor said it was huge and even gave me a picture to keep of the nasty thing.  I thought it was cool but not everyone does so if you want to see it just let me know.  The first picture was taken when he got to come home from the vet's office the day after surgery.  I found out this morning that the tumor he had was not cancerous so we all breathed a sigh of relief.  Pacey has always despised Halloween costumes but I get him one every year.  In the second picture, he’s dressed up as a groom and he looks devastated which means he is getting back to his normal self.  He’s still not eating like he used to but I feel better knowing that giant thing is out of him. 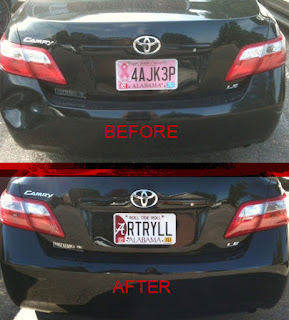 I wanted to share my new car bumper with you.  Last year sometime, I backed into a truck leaving quite a big dent in my bumper.  Well, I saved up and I finally got a new one.  It’s so pretty that I just had to share.  I also got a new tag, but not to worry, I haven’t stopped caring about breast cancer research and I will make sure to compensate for the new Bama tag somehow this year.  I kept the tag though and it’s in my room because I dedicated that tag to the Pittman family.  My BFF Jordan lost his aunt Angel to breast cancer 3 years ago as of last week and she will always be loved and missed! 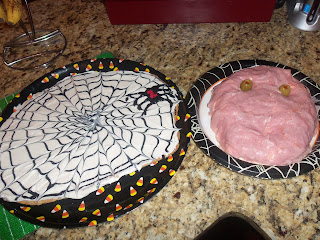 The final thing I wanted to share was the non-healthy food I took to the first of 3 Halloween parties I had this weekend.  My mom helped me (and by help I mean did most of the work) make this spider cookie cake and scary face cheese ball.  The cookie cake is so easy.  You just take a standard tube of sugar cookie dough, slice it up and put it on the pan into one giant cookie.  You bake it, let it cool then top it with store bought cream cheese frosting.  When that’s done, you take black icing and swirl it around on the cake and then run a toothpick through it to give the spider-web look.  The face is just my mom’s famous cheese ball shaped into a face then covered in ham.  We used green olives for the eyes.  Both treats went over very well because not a crumb of either was left.  Thanks for the help, Mom!

That’s all for today!  I’ve got two more Halloween parties this weekend so I’m excited.

Unfortunately, I have to miss it but Alabama is playing Mississippi State in their homecoming game on Saturday so, ROLL TIDE!