I have a serious case of the Monday’s today y’all.  I hope you all aren’t stuck in the same Monday rut.  If you are, no worries, we will make it through the day.  My weight this weekend hadn’t really changed.  I’m OK with that because I did have a bad lunch on Tuesday so staying the same was actually a relief.  I was at about 75-80% this weekend so I’m hoping that my weight will be down this weekend or at least even with last weekend.  I realized today that I haven’t lost weight since April.  I was disappointed when I realized this because it’s become clear to me that my body is over this whole “let’s lose weight” thing.  The problem is, I’m not done.  Granted, I am relieved that after losing 115 pounds, I’ve managed to maintain that weight.  I’ve only had a variation of 3-5 pounds that creep up when I’m not at 100%.  I suppose I should be proud of that and I am, I’m just not sure how to re-charge. 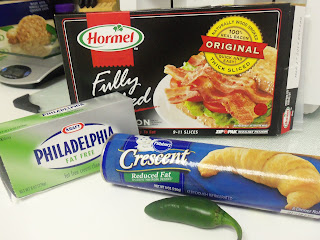 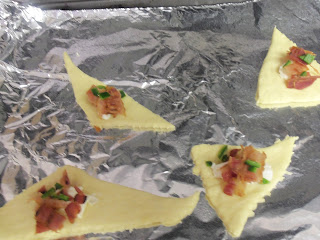 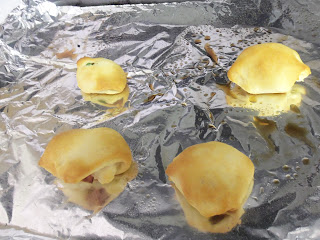 The recipe this week came from Pinterest.  In fact, every bit of food I will show you was Pinterest inspired.  I guess I have accepted the fact that I rely on it completely for everything now.  I don’t know if it’s just a phase or if my excessive pinning is here to stay.  The good news is, it inspires me to be creative and take dishes that may normally be unhealthy and make them better.  These jalapeño poppers called for full fat crescent rolls and cream cheese but I used Reduced Fat Crescent Rolls and Fat Free Cream Cheese which made the fat and calories drop quite a bit.  All you do is roll out the crescents and add the cream cheese, jalapeño, and bacon in the center, roll them back up and bake them.  The best part about these, other than their simplicity is that you get to put bacon in them!  Unfortunately, the serving size isn’t great.  You shouldn’t have more than 2 but they taste great! 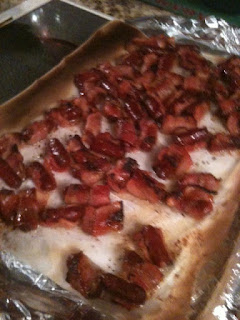 The recipes I made for my mom’s birthday celebration last night were also from Pinterest but they weren’t healthy so sorry about that.  My brother made burgers and we had salad but I also made 3 more new recipes.  The first were bacon wrapped cocktail weenies.  Basically, you take the little smokies, wrap them in a piece of bacon (cut into thirds) and place them along the bottom of a pan.  After that, you melt a stick of butter and mix that with a cup of brown sugar and pour it all over the top and then bake them.  Between the bacon renderings and butter, it made way too much grease so we drained them, moved them from their casserole dish and put them on a cookie sheet and then placed them under the broiler so the  bacon could get done and they would be a bit crispier.  They tasted great! 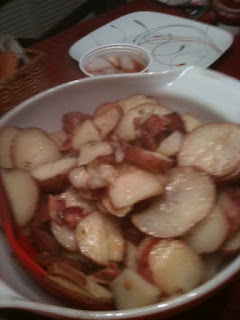 I also made bacon-ranch potatoes.  You are actually supposed to make these hobo style.  You take a sheet of aluminum foil and place sliced red potatoes, butter, ranch dressing mix and bacon on top, wrap them up in the foil and then cook them for 20-30 minutes.  We microwaved our potatoes for several minutes before putting them on the grill so they would actually BE done in 20-30 minutes.  Unfortunately, my brother and I made packets far too big to fit on a plate so we just dumped the potatoes in a bowl and served them that way.  They turned out great.  They had nice flavor and my parents had plenty left over to fry up tonight for dinner. 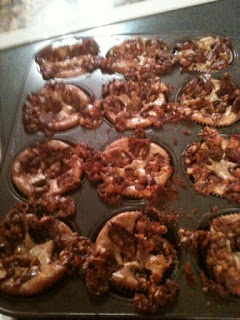 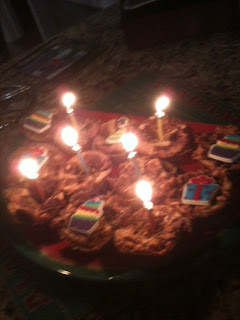 Finally, I made miniature Snickers Cheesecakes for my mom’s birthday “cake.”   You prepare the graham cracker crust and press it in the bottom of the muffin tin and then fill it with a cheesecake mix of cream cheese, sugar, caramel sauce, eggs and vanilla.  Before you put them in the oven, you top them with pieces of Snickers.  These were SO rich but they were SO good.  We topped them with even more caramel sauce.  Overall, I think it went well.  I don’t handle multiple dishes at once very well at times  because of poor time management but the help I got made it much better than it could have been. 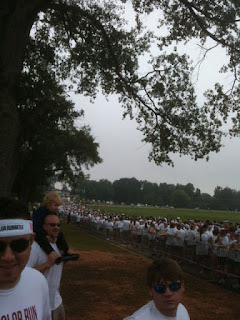 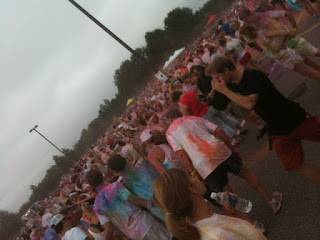 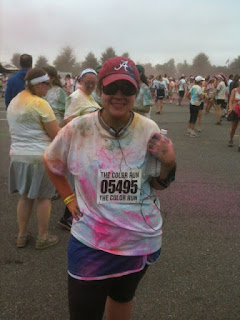 This weekend, I ran in something called the Color Run.  These are popping up everywhere and they are popular 5K’s to raise money for books.  The concept is simple.  You run a 5K and at certain points in the run, people take a ketchup bottle and squirt colored corn starch on you.  It’s just a different and fun way to have a 5K.  I’m  thinking it wasn’t quite a 5K because I ran it in less than 36 minutes but I was proud because I ran it the ENTIRE way without stopping.  There were so many people there.  It was a lot of fun and I was glad I did it.  I wasn’t perfect Saturday night when it came to food but I got up Sunday morning and exercised for an hour.  Now that I think about it, I am proud of myself even though I haven’t lost weight since April.  That means that for 6 months, I’ve been in a plateau and I haven’t given up.  No matter what happens, I always start over the next day.  I will get the re-charge I need. I just need to be patient, continue working hard and wait for the mental re-dedication to kick in and for my body to get on board with what I want to do and what my goals are.

Y’all shouldn’t give up either! You make goals for a reason.  Even when you feel discouraged, keep those goals in the forefront of your mind.  Beating yourself up is counter-productive.  You can do it!

Have a good week and ROLL TIDE! Bama plays Missouri this weekend. Bye!