Hey y'all.  It has been a cold, dreary Monday in Tuscaloosa.  I hear there was an epic rainbow though so at least Mother Nature ended the storm with something pretty.  I was none too pleased with the number on the scale this week.  I did really well and gained 3.5 pounds.  That's not a couple ounces y'all, that's a big gain and it's frustrating.  I feel like a broken record at this point but whatever.  This week is a new week I guess. 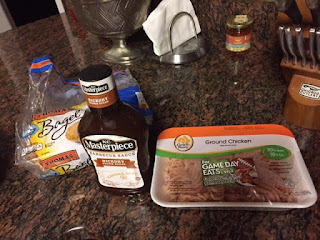 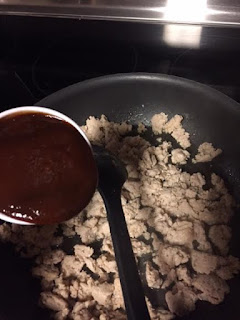 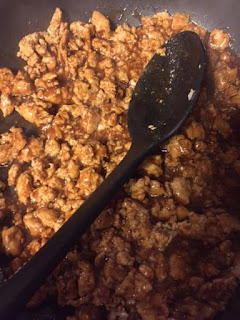 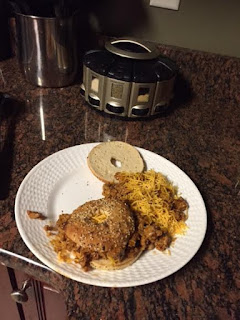 I didn't grow up in a Manwich family.  If my mom made Sloppy Joes, they were from scratch. It's not something that we had a lot of though.  I enjoy them but when it comes to the weeknights, I'm incredibly lazy and there isn't a single part of me that wants to spend a lot of time on dinner.  Last week, I made a version of Sloppy Joes that Sloppy Joe enthusiasts (if there are any out there) would call an imposter but I don't care.  It was delicious.  I cooked up some ground chicken in a pan, added barbecue sauce and called it a day.  I sprinkled some cheese on it and used my toasted Everything bagel bun and if I had let myself, I would have eaten the whole pan (there's a chance I did but I cannot recall and nobody can prove anything).  The sweetness of the sauce combined with the saltiness of the cheese and bread made for a perfect, quick and easy dinner! 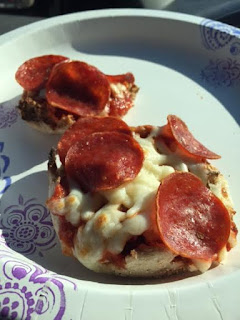 Also, I lamented about my eggplant pizzas last week.  My mom reminded me that light English muffins also make a good vessel for pepperoni and cheese so I threw that together this week with much more success.  Of course, eggplant is healthier than bread but I'd rather have two small, filling pizzas than several eggplant pizzas that I don't like.

I had a lovely Valentine's Day picnic with Ian yesterday at the Natural Bridge in Alabama.  I hope that your Valentine's Day was full of love or chocolate or something pleasant. Have a great week.