Hey y'all.  It's nearly April and it's hard to believe. It seems cliche to talk about how quickly time moves but it really does...especially as I get older.  I weighed on Saturday for the first time in awhile. I am a happy person but I have a great deal of anxiety.  Lately, I have been depressed about my weight gain and financial issues (suffocating student debt) and I am not a fan of feeling this constant heaviness (pun intended).  I decided Saturday, even after I weighed and was sad about the number, that I would get dressed as if I DIDN'T hate my body. It sounds dramatic and perhaps it is but it's important for me to remind myself that I am a person who should be proud of who she is, inside and out, in spite of a number on a scale. I tend to strip myself of humanity based on how my belly looks in certain pants.  It's not fair to myself or anyone around me to consistently berate who I am.  I have a lot going for me.  Obsession is a scary thing. Lately though, I find myself not wanting to talk about it at all.  I don't want to talk to people about weight loss or food ideas.  I am trying to avoid it which is also not the best idea. So, I decided to be more positive about who I am and tell you when I do GOOD things.  As I said, I got ready Saturday in a way that implied I didn't care that my pants don't fit as well as they used to.  I straightened my hair and put on mascara. I felt pretty for the first time in quite awhile. It was an important moment.  On a lighter yet equally important note, I turned down a french fry that Ian offered me earlier because I wasn't hungry.  It's the little things. I'm going to weigh again this week to keep me on my toes but I am really trying not to be so hard on myself. 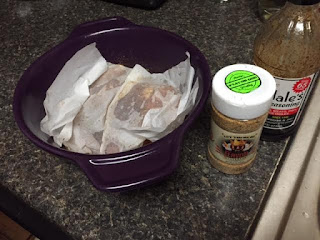 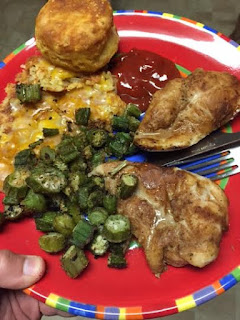 I am someone who loves to cook and try new things.  Some dishes are trial and error. Baking chicken may seem like a simple task but I have a bad habit of drying out meat.  I ask my mom for advice and also hit the web for tricks to get juicy meat.  This time, I read that if you marinate your chicken, add it to a baking dish and then cover it in parchment, it traps the meat. I cooked it at 350 for about 30 minutes then it had to go about 5-10 more at 400.  It was AMAZING! It was the best chicken I've ever made. It was juicy and tender and tasty.  I served it with okra that I just baked in a pan and then added spices. 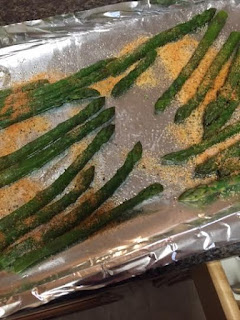 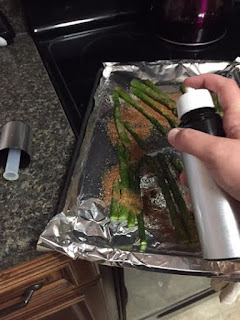 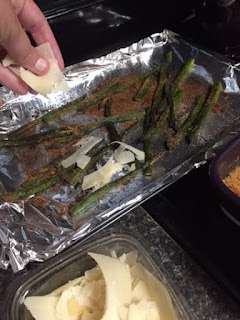 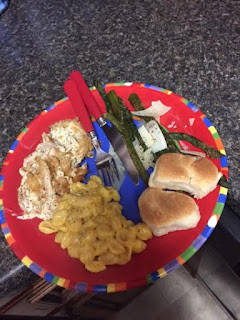 One of Ian's favorite dishes is poppyseed casserole.  He loves for me (or anyone) to make it and serve it with mac and cheese. Since neither of those dishes are particularly nutritious, Only make it once every couple months. This time, I opted to throw a little green on the plate to make myself feel better.  I took frozen asparagus, steamed it in the microwave, then popped it under the broiler (adding some olive oil mist), adding lots of yummy spices and then at the end, I topped it with fresh parmesan.  I am obsessed with parmesan cheese and think everything should have it.  Ian skips the green usually and the asparagus was no exception...more for me. I hope everyone had a nice Easter! Until next week, y'all.