Howdy everyone! Has everyone had a good week? If you have , YAY! If not, at least it’s Friday right? I've had a pretty good couple of days. Yesterday, I weighed in the morning just to see what it looked like and because of my hard work, I had lost all of my Vegas weight plus one more pound bringing my total loss to 79.4 pounds! I was so surprised and excited! I celebrated by totally putting weight back on the past two days. Last night, Alabama had a random football game (we won by a landslide) so I probably had a few too many calories last night and then we had our work Thanksgiving lunch today and I ate WAY too much. My body is NOT happy with me…I am not going to weigh again until NEXT Thursday morning. That’s Thanksgiving so I’m hoping I will get lucky and even out so I can gain a little again. I have quite a holiday system here but so far my plan to maintain is working…it should continue to work but that depends on my flawlessness this weekend and Monday-Wednesday. I can do it. 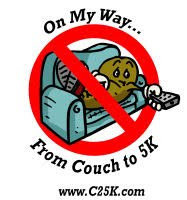 I have never been a “runner.” Actually, I’ve never been anything close. When we had to run the mile in high school, I walked…it would take me FOREVER to do the mile. Over the past year and half, I have pretty much solidified exercise as part of my daily routine. It’s not something I even question any more. This is a good thing but from time to time, I do like to change things up. It’s good for the body and mind to try new things. I have always admired those people who I see at the park, running for miles. Some of them even say that is where they clear their minds. I have tried running in the past. I would try to go for 60 seconds or longer and I’ve tried just running without timing. I have always given up because there was no real structure and I didn’t know how to really build myself up to go any distance. I sort of decided that I simply CAN’T and WON’T ever run. I heard about the Couch to 5K program through a friend. They have an app for the iPhone and I decided I would give it a try. I have bad knees so I have been keeping a close watch on my knees to make sure I don’t hurt myself…I want to make sure if I’m hurting, it’s a good hurt, not a permanent injury hurt. So far, I haven’t had any knee trouble. I dare say, I’ve had less trouble now that I’ve been doing Couch to 5K. The concept is simple. You run only 3 days a week and each day of the work out, you run different times and increase your endurance with every session. Once you complete the workout, you check it off and it moves for you to the next one. The app tells you when to walk and when to run through your headphones and it also works with Pandora radio or your iPod on your phone so you can also listen to music. You always have a warm-up and a cool down. The first week you alternated 60 seconds jogging with 90 seconds walking. Each week it increases and changes up the routine. It’s a 9 week program and I just finished week 5…which meant I jogged for 20 minutes without stopping. I honestly never thought it was possible for me to do that so I was pretty proud of myself. It’s tough and I still have 3 weeks to go…I peeked ahead and it looks like at some point next week I have to run 25 minutes without stopping…so it’s only going to get worse but I cannot tell you how I feel when I get done. Plus, it's GREAT exercise...I can really tell a difference. I would definitely recommend this program. It’s realistic…3 days a week and it is gradual. I will say though that if you are an actual couch potato who hasn’t exercised much in months or years, I would walk daily for a few weeks at least before I tried Couch to 5K because I’ve been exercising every day for a long time and it’s still kicking my butt…just a suggestion.

Well, this weekend should be relaxing. Tomorrow…I am SO excited… 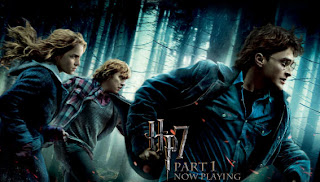 HARRY POTTER & THE DEATHLY HALLOWS PART 1 came out today and I’m going to see it tomorrow! I love Harry Potter so I’m very excited. I have read all the books and it is by far my favorite book series EVER…Regrettably, I’ve only read the series once but I plan on reading them all again before the last movie comes out. Anyway, I am pleased to be going to see it tomorrow afternoon. I’m also cooking dinner with Whitney tomorrow night…it should be a lot of fun…we both love to cook and we got a pretty awesome menu set up. Sunday is REST day…I have to run and do a load of laundry but I plan on catching up on TV the rest of the day.

Next week will also be awesome. It’s a short week, Thanksgiving is Thursday and the Iron Bowl is Friday (more on all that next week)! I hope you all have a great weekend! Roll Tide! Bye!