Hi All! Long time, no blog! I hope you all had a wonderful Thanksgiving…I know I did! I hit the 80 pounds down mark on Thursday morning which was very exciting! I know that between all of the good Thanksgiving food that I gained a couple back but I’m not weighing again until Saturday morning so hopefully by then I will be balanced back out. I also ran before I ate on Thanksgiving. I am on week 7 of Couch to 5K and I had to run 25 minutes with no stopping on Thursday. It was pretty tough…my brother went with me. It was so sad…he could power walk as fast as I was running but whatever…I did it and I was very proud. I also ran the 25 minutes again on Sunday and I have to run it this afternoon when I get home. Next week will be 28 minutes and then the last week (week 9) will end with running 30 minutes which I guess for a normal person is a 5K but for me, I think it’s more of a 3K or 4K. I am really noticing a difference from the running and I can’t explain how happy I am when I finish…it’s hard but as long as I’m not hurting too bad and it makes me feel great, I’m going to keep going. I posted a couple of pictures below from Thanksgiving… 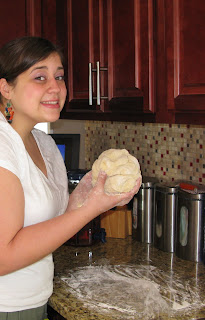 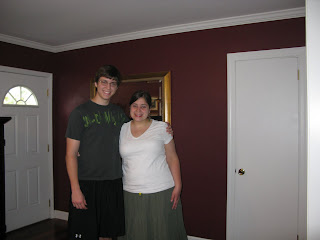 I was making yeast rolls. We had SO much food! It was all delicious! Thanksgiving was great and up until the second half of the Iron Bowl, Friday was AMAZING. If any of you out there were wondering how to successfully crap on a 24 point lead, I hope you were watching the Alabama-Auburn game on Friday. Honestly, I don’t think it was the fact that Alabama lost the game…we were playing the number 2 team in the nation. The problem came because we totally let up and let them get the momentum…basically…we lost to ourselves. I was actually OK after the game, I found myself consoling other people but with each passing day, I get more and more disgusted. I thought things were supposed to get better as the days go on but not with this because every time I turn on the TV, I hear about one of the best comebacks ever…gross. Even though it is purely out of meanness, I hope South Carolina beats them in the SEC Championship…if they don’t…then GO OREGON DUCKS! I love football season so I’m going to miss it…though…I feel like I might lose more weight now.

The rest of the weekend was spent hanging out with Jordan, family and SHOPPING. I was trying to get some Christmas shopping done. I’ve made a good bit of progress but there are a couple of things that require me to actually sit down and work on them and I am procrastinating…bad. Also, the mall in this town is crazy busy. I went in there and it was miserable…there were so many people there. I actually had some good luck yesterday on Cyber Monday so that was good…and I didn’t have to go anywhere. 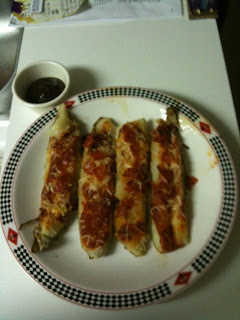 I made Pepperoni Pizza Potato Skins. They are pretty self explanatory but you just take a large potato and bake it completely, then let it cool. I am impatient so I didn’t let mine bake as long as I should have but it still turned out fine. Once you let it cool, you just cut it into quarters, dig out half of the flesh of the potato and replace that with a layer of pizza sauce, then part-skim mozzarella and diced pepperoni. I dipped them in barbecue sauce too just for an added kick. This was very filling and tasty. Anytime you can make a potato skin or other party type food and it be OK with Weight Watchers, it’s a good thing. OK-that’s all for today…I will blog like normal on Thursday! Bye!