Greetings Y’all! It feels like a long time since I’ve posted but I think that’s because I’ve just been so busy. After Vegas, I had a lot of work to catch up on. I’m also way behind on TV but I didn’t get to do too much TV watching this weekend. Saturday, I weighed against my better judgment. I was up 4 pounds. Honestly, that’s not too bad considering that I ate pretty crappy for 5 straight days. I would have really hated to see how much I would have gained had I not been exercising like crazy. I am going to weigh again Thursday morning to see if I have gotten rid of most of the 4 pounds…I hope I have because I know there will be some sketchy moments on Thursday night at Alabama’s football game and then at lunch on Friday because we are having our Thanksgiving lunch at work. That’s right, Alabama is playing this Thursday night…it kind of sucks because it’s a work night, it’s going to be cold and we are playing a team who didn’t even exist last year. It’s Georgia State and this is their first year to even have a football team. Anyway, I will have to leave right after work to get there so I know dinner might be a little touch and go. Hopefully between this weekend, yesterday, today and tomorrow, I will have gotten rid of most of those 4 pounds so I can even out again by next week. This maintaining stuff is hard…I need the holidays to hurry up on out of here because I am DETERMINED to lose at least 20 more pounds by May. That was a lot of rambling just to tell you that I weighed on Saturday…but anyway. I also cleaned the heck out of my apartment, watch Alabama beat Mississippi State, hung out with my folks and some friends and I even got like 3 hours just to do nothing. It was a nice weekend. 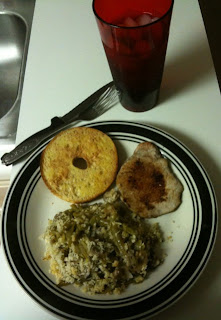 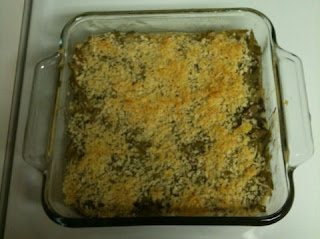 In the spirit of casserole season, I made green bean casserole last night. I included a picture of the the plate I made (I just made a pork chop and some bread to go with it) and then a picture of the whole thing so you saw it all together and didn't think it was just a blob of plain green beans. The casserole was an actual Weight Watchers recipe and it was DELICIOUS! First of all, I am weird about green bean casserole that my mom didn’t make because…that’s just what I’m used to. The recipe called for fresh green beans but I’m not a fan, so I did use canned. The only thing was…I misread the recipe…it said ¾ pound of green beans but I read it as 1-1/4 pound…so I had too many green beans but it still turned out awesome. The creamy factor for green bean casserole is usually cream of mushroom soup but since that is kind of fattening (I know there is reduced fat cream of mushroom…you may be able to substitute but I think making it yourself may taste better), you sort of make it yourself. You use reduced sodium chicken broth, onions, mushrooms, garlic and flour. Once you thicken the sauce, you mix it with the beans. Then you top it with a crumble of low fat butter, bread crumbs and grated parmesan…and then you bake it. I ate a TON of this stuff because it tasted so good and it’s basically just vegetables. I will definitely make this again as a side.

It has been so dreary here the past couple of days. The sun hasn’t been out more than a few minutes and we have had a lot of that cold rain. It’s all around icky outside, plus it gets dark by 5. I am not adjusting well to the weather and time changes…my throat hurts in the morning, I have all kinds of fluid built up in my ears and I am totally exhausted all the time. I think part of my fatigue can be attributed to the fact that I just got contacts for the first time and for some reason, they wear my eyes out. I think once I get used to a foreign object in my eye and once I get accustomed to the weather, I will feel better…and stop complaining.

Well, I know that I said I am ready for the holidays to get over with, but I really am looking forward to being with family, giving gifts and eating good food. I just find it really hard to work everything off and also…I am SUCH a scrooge when it comes to Christmas music. The only time I usually accept Christmas music is when I’m decorating a tree, other than that, it sort of drives me crazy.

I think that was all I had today, I know it was sort of a hodge podge of things but it’s my blog so I guess I do have certain liberties in what I want to say…even if there is not really a point.

I hope you all have a wonderful evening!

And who do you think you are
Running 'round leaving scars
Collecting your jar of hearts
And tearing love apart
You're gonna catch a cold
From the ice inside your soul
So don't come back for me
Don't come back at all.” Jar of Hearts-Christina Perri
Posted by Heather Wyatt