Well, hello everyone! I hope that this is a short week for you like it is for me. I am off Thursday, Friday, Saturday AND Sunday! I am very excited about the time off. As I told you last week, I weighed on Thursday morning and I was down one pound. I had a rough few days in terms of dieting so I’m sure that I added a couple of pounds. I’m hoping to lose those again by Thanksgiving morning. I am in quite a roller coaster phase right now but as long as I keep coming back down, I’ll be fine. I have a lot going on the next several days so before I fill you in on all my plans, I wanted to share last night’s recipe with you. 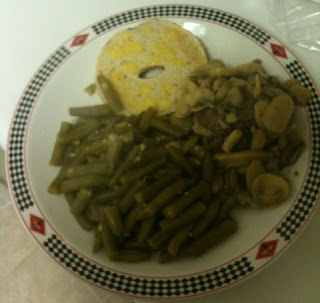 I made Home-Style Salisbury Steak With Mushroom Gravy. I apologize for the dark lighting in the picture, my iPhone doesn’t have the greatest camera in the world. So-as you can see, there are a lot of mushrooms in the gravy. I love mushrooms so I put more in there than it called for but you can use less. This was really delicious! It was definitely comfort food. You take the leanest ground beef you can find (4 oz per serving), combine it with onions, salt, pepper and half a piece of whole wheat bread and form it into a patty. Then you put it under the broiler for 6 minutes on each side. While it’s cooking, you sauté mushrooms and garlic and then add ¼ tbsp of flour and ¼ cup of broth and stir for several minutes to make the gravy. I only made one serving so obviously, the ingredients would multiply if you were making the recipe for more people. I made the recipe with green beans which I make a lot because they are pretty much my favorite vegetable but you can make whatever veggie you want as a side. The beef was moist and tasty and the gravy turned out great. The best part was that it really didn’t take more than 20 minutes to prep and cook it. It’s definitely a keeper.

As a side note, while I was sitting on my couch last night, there were many moments I had to stop to retrieve the mushroom or green bean that I dropped on my shirt or on the ground. I am such a messy eater. I cannot tell you how many clothes I’ve lost due to that random grease spot that shows up right in the middle of your shirt when you take it out of the dryer because somewhere along the line, you dropped a fry or some gravy right in the middle. I may have discussed this before but I thought I would bring it back up after I just lost yet another shirt the other day. I want to know why I NEVER see skinny people with those obnoxious stains. I never see a skinny person at a restaurant spill an entire cup of barbecue sauce from head to toe on themselves when a waiter hands them their plate. That kind of thing seems to only happen to those of a more healthy stature. Of course, I would spill things down the front of my shirt. I feel like people think all fat people eat like Jabba the Hut, just frantically throwing food at themselves hoping that they make it into their mouth. That’s not the case…because I know that I’m a clumsy eater so I take extra care to not make a mess but EVERY time…I spill something. I have concluded in the past that skinny people don’t have a large, “D” sized barrier in their way like I do, a food catcher, if you will. Still though, I get stuff underneath my bra…like…how does it even get there? I think those stained clothes are like a fat person’s war wound or something. As if being fat weren’t enough, you have to wear these scars of remembrance on your clothes that not only are you fat, you are fat AND sloppy. I realize MOST of this is in my head but as an avid conspiracy theorist, I have to think there is more to this than coincidence.

Ok-speaking of a time in which I’m guaranteed to spill something on myself, Thanksgiving is Thursday! I am not going to blog again until next Tuesday so I thought I would give you some Happy Thanksgiving images ahead of time… 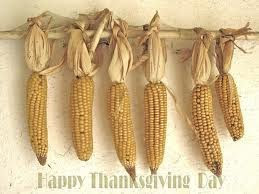 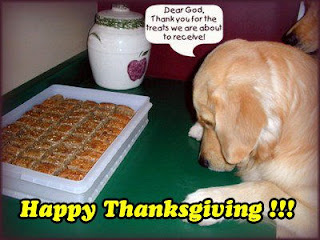 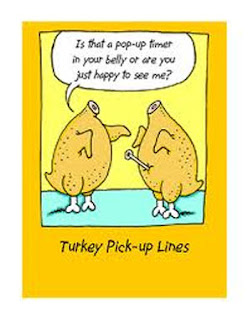 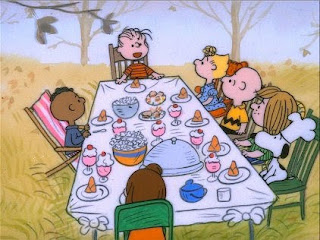 I hope you all have a wonderful time with friends and/or family. Also, if you know me personally and you don’t have a place to eat on Thanksgiving, email me heather.m.wyatt@gmail.com and I will be glad to invite you to eat with me and my family because no one should spend Thanksgiving day alone. I am looking forward to all of the delicious food! I know that I will not be dieting BUT according to Couch to 5K, I am due to run 25 straight minutes on Thanksgiving. I plan on doing that before I eat anything so if I can accomplish that, I will feel much better about the casseroles and pies I will be eating. 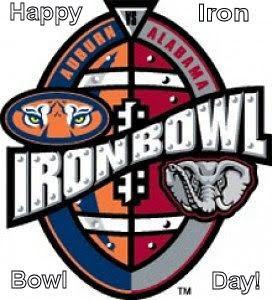 That’s right, Alabama has a chance to ruin Auburn’s season and salvage ours this Friday. Auburn is really good this year but Alabama is a monster at home and we haven’t lost at our own stadium in a LONG time so I hope we continue the streak. It will be tough but the Iron Bowl is always jam packed with energy and I’m hoping for a close game with Alabama coming out on top! ROLL TIDE! It’s going to be a really fun day.

As you know, there is a lot going on the next few days. I am going to try and get some Christmas shopping done Saturday and Sunday…most of all…I want to have fun, eat good food and relax because come Monday, it’s back to normal grind for at least a few weeks until Christmas.

Have a wonderful holiday weekend! I will write again Tuesday with another recipe, updates and other things!

“Song, song of the south
Sweet potato pie and I shut my mouth
Gone, gone with the wind
There ain't nobody looking back again

Cotton on the roadside, cotton in the ditch
We all picked the cotton but we never got rich
Daddy was a veteran, a southern democrat
They oughta get a rich man to vote like that

Song, song of the south
Sweet potato pie and I shut my mouth
Gone, gone with the wind
There ain't nobody looking back again

Well somebody told us Wall Street fell
But we were so poor that we couldn't tell
Cotton was short and the weeds were tall
But Mr. Roosevelt's a gonna save us all

Song, song of the south
Sweet potato pie and I shut my mouth
Gone, gone with the wind
There ain't nobody looking back again.” Song of the South-Alabama
Posted by Heather Wyatt