And the Oscar went to... 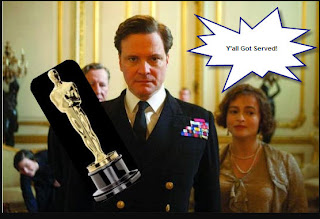 I wonder if in Colin Firth’s head, he’s been all Charlie Sheen being like, “Duh, I’m tired of pretending like I’m not special. I’m tired of pretending like I’m not a total bitchin’ rock star from Mars. Winner.” Somehow I doubt it because his speech was very humble and cute…I just sort of wished everyone provided the same psychotic entertainment Charlie Sheen has been giving out lately. I don’t know if everyone watched but in case you didn’t, as predicted, The King’s Speech was the big winner of the night. Not only did it win for Best Picture, Colin Firth also received the award for Best Actor. I think both of those awards were deserved but not really exciting seeing as how that is what everyone predicted. In fact, aside from a couple awards (and even those weren’t major surprises), there were no unexpected wins. I usually anticipate one award that sort of makes everyone go…wow…I didn’t expect that. I predicted most of the major categories correctly except for the few that I went out on a limb on in case there was a surprise. As far as the other categories, I totally bombed. Oh well, I enjoyed the show and it is so nice to watch when you’ve seen all the movies. I also want to praise James Franco and Anne Hathaway. I thought they did a great job. People are being so hateful about them and I’m not exactly sure what people were looking for…James Franco was a bit aloof at times but a) that seems to be who he is and b) he was nominated for best actor…he was probably nervous. I thought Anne Hathaway was gorgeous, funny, gracious and cute! I don’t know what people expected but the intro to the show was awesome I thought and the show ended on a very touching note. Anyway, the Oscar talk is over for now, until next year!

Last night was recipe night and both recipes came from skinnytaste.com which is the site I told you about last week. I will probably make a lot of recipes from there from now on…I love this site! 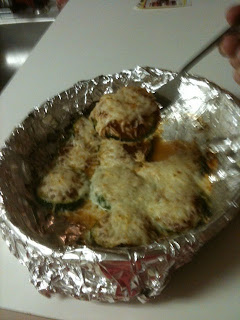 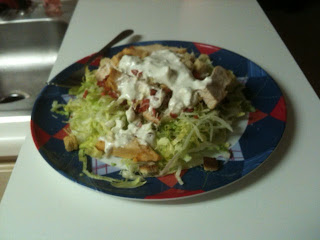 The first recipe is called Zucchini Pizza Bites. All you do is slice a zucchini into about a quarter inch thick slices, broil the slices on a greased pan in the oven for a few minutes on each side and then top each slice with a little pizza sauce and part-skim mozzarella cheese. Broil it long enough to melt the cheese and you are done. This was SO tasty! The zucchini is essentially a vessel for the yummy, salty cheese and pizza sauce. It’s a nice snack or side dish to have readily available and it’s super easy.

The second picture may look like just a salad but see that white dressing on top? That’s the real star of the night. I made my own blue cheese dressing last night! I don’t know about you but diet dressing makes me pretty much disgusted. I usually suck it up and put it on my salads but I get a different Italian or Vinaigrette every time because I can’t ever find ones I like. I saw this recipe on skinnytaste.com and it looked less involved than most of the blue cheese dressing recipes I’ve seen and there was nothing sweet in the ingredients…I detest a sweet dressing. All you do is mash together half cup blue cheese and 6 ounces of non-fat Greek yogurt. After those are blended well together, add a tablespoon of light mayo, lemon juice, white wine vinegar and garlic powder (I put a little more garlic than it’s called for). Then, you add some salt & pepper and you are done. This dressing is ABSOLUTELY DELICIOUS! It is BY FAR the best low fat dressing I’ve EVER had!!! The best part is that it has the same points as all the yucky fat free or low fat Italian & Vinaigrette dressings. I made 8 servings of it and it is definitely a recipe that I will keep in the front of my cookbooks to make all the time. It’s not expensive to make, especially since aside from the blue cheese and yogurt, you can make multiple batches from the ingredients you already bought. It was creamy and the blue cheese was potent and with the yogurt and garlic, it almost tasted like I was eating a regular dressing. I give this recipe 10 out of 10!

In addition to the Oscars this weekend in which I enjoyed WAY too much good food (there were appetizers galore), I went to the driving range again with my Dad. I’m really enjoying going…I think I get better and better and not only am I finding it fun and a good opportunity to spend time with my Dad, it’s been great exercise. I can feel my stomach muscles moving around with every swing. My biggest problem is that I can’t remember every step I need to take before I swing. It never fails that I forget to line up my feet right, bend my knees, keep my head down and so on. When I actually do remember all of those steps, I don’t do too bad. I definitely want to keep going back. I expanded my golf wardrobe this weekend, I got a collared shirt, a glove, a driver and some tees. My mom even bought me two more really cute collared shirts yesterday. Maybe one day in the next few months, I can actually try and play a couple holes…I’ve got a little bit to go before that happens though.

Have a nice week everyone! Bye!

“Who doesn't long for someone to hold
Who knows how to love you without being told
Somebody tell me why I'm on my own
If there's a soul mate for everyone.” Soulmate-Natasha Bedingfield
Posted by Heather Wyatt