If you are participating in Mardi Gras festivities today (or the past few weeks), I am very jealous but I hope everyone is having a fun, safe time. New Orleans is probably my favorite city to visit just for a weekend trip, I’ve done that several times and each time, I have a blast (with the exception of the time we went to watch Alabama lose in the Sugar Bowl). New Orleans is like our version of a European City, you can tour churches and museums during the day and well…I think we all know what kind of goings on happen at night. Even though I am at work and I have no great plans of eating Cajun cuisine or trying to find a Hurricane at a bar somewhere tonight, I am in New Orleans in spirit…hopefully, I will get to go back soon. My mom did make a King Cake from scratch on Sunday which was delicious so I included a picture of that as well.

Also, Happy International Women’s Day! If I’m being totally honest, I had no idea that it was International Women’s Day until Jordan told me this morning. I’m not sure what it says about me that I’m far more aware of Mardi Gras than the 100 year anniversary of a day that celebrates women but I hope I’m not doing too much damage to the cause. The truth is, I think it’s great that there is a day that cherishes women and all that they contribute to society but as a society we can always do more. Women have come a long way but they still aren’t paid as much or respected as much as men so I hope we all keep working toward that goal. I will do my part by marking International Women’s Day in my calendar for next year so I don’t forget.

There wasn’t too much going on this weekend to report. I relaxed a little, shopped a little, worked on my teaching portfolio (I’m trying to pick up a couple night classes to teach and I need to put together a ton of things in preparation) and saw some family and friends. It wasn’t very eventful so I will go ahead and discuss the weekly recipe. 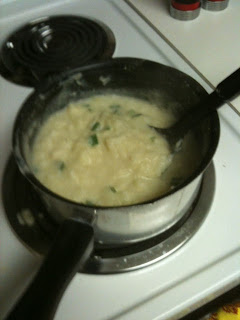 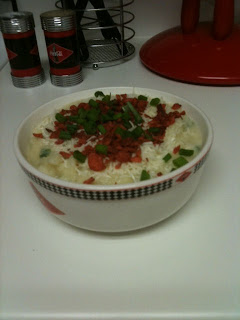 It’s been kind of dreary around here the past few days so I made Baked Potato Soup. I got this recipe from skinnytaste.com and it was all kinds of YUM. The base of the soup is potatoes, cauliflower, fat free chicken stock and I think there was also fat free milk in it. Basically, you microwave the potato first (peel it after), then mix it with the already steamed cauliflower and then add the liquids. You boil all that together and then you use an immersion blender to mix it up so it becomes smooth. I don’t know what an immersion blender is but I can tell you what it ISN’T…It definitely is NOT a hand mixer. The goal was to puree the stuff in the pot so it wasn’t lumpy and I didn’t have an immersion blender so I stuck the hand mixer right into the pot. After I wiped the hot, potato substance off my face and clothes, I realized that I wasn’t using the proper equipment. Unfortunately, all I had was the hand mixer, so I carefully pulsed at the soup until I got what I determined was a “good enough” version of the puree the recipe called for…Once all of that boils and simmers together for a little while, you are basically done. You just put it in a bowl and then top it with chives (which you can also mix in the actual soup), low fat cheese and crumbled bacon (or if you are lazy like me, Bacos). I was able to have a lot of it so I was extremely full when I got done. It was super flavorful because I added salt, pepper and garlic and an overall great recipe. That’s it! Have a great week! Bye!

“Don't underestimate the things that I will do.
There's a fire starting in my heart,
Reaching a fever pitch and it's bringing me out the dark…” Rolling in the Deep-Adele
Posted by Heather Wyatt