The obsession that the media (and my Dad) have with Charlie Sheen has thankfully died down a bit due to unfortunate and awful real disasters going on in the world but I have to say that I have a love/hate relationship with the term he coined that has become so popular. Winning. You can’t just say, “winning,” either…there is a tone…that little bit of inflection that someone uses when you can tell that they are impersonating Charlie Sheen. It’s one of those things where it is unclear whether or not the situation or that person is actually, “winning,” or if there is sarcasm. In the past few days, that phrase has taken on multiple layers of meaning that reach from disturbing to funny to awkkwaaaarrrrd. Today, I will use the phrase “WINNING” to describe my weekend and the way I’m feeling right now. Remove any intonation you might be hearing that sounds like Charlie Sheen…I am just feeling confident these days. I got my hair cut Saturday which always helps (just got some bangs and I’m trying to throw in a little curl here and there) and as I stated Friday, I am a mere 5ish ounces from hitting the 90 pound mark so I have a little more pep in my step than usual. Don’t get me wrong, there are still moments of every day that I battle my former self…the person that tries to beat me down and make me feel worthless or bad about the way I look…but the new me is fighting her with a vengeance and each day, I overpower her a bit more. Even if I don’t lose weight this week or the next (which may be possible due to the caloric intake of my weekend), I know I will be OK. I will press forward, it feels good to know that.

I had a supremely busy weekend, I don’t think I rested at all. I really racked up some physical activity because I ran and cleaned on Saturday and then shopped, golfed and cleaned some more on Sunday. Dad and I went to an event called Suds of the South here in town on Saturday night and we met up with some of my friends and had a fantastic time. I love when there are different things to do in this town. It doesn’t happen as often as it should so you kind of feel like you need to take advantage of it when it does happen. I am hoping that this weekend will include a bit more downtime. Since I won’t blog again until Friday, I wanted to go ahead and wish you an early Happy St. Patrick’s Day! 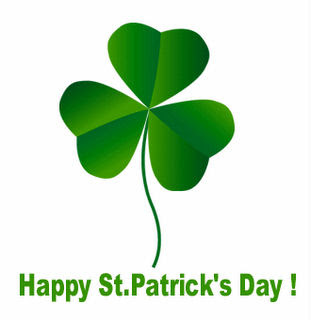 Remember to wear your green on Thursday! In honor of St. Patrick’s Day, I made two green recipes that I’d love to tell you about (both from skinnytaste.com… 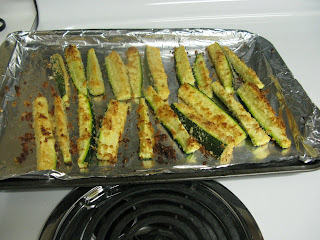 The first is a recipe called Zucchini Sticks. I think I’ve made something very similar to this before so I made another recipe just to cover my tracks but I love these things. Essentially, you just cut up the zucchini into fry-sized pieces, dip them in egg whites and then a Panko bread crumb mixture that includes spices and bake them. Some people don’t care for the mushy texture of zucchini but these are crisp on the outside and the longer they stay in, the more firm they get so even the pickiest of zucchini eaters will like these. The next recipe is something I’ve definitely never made before… 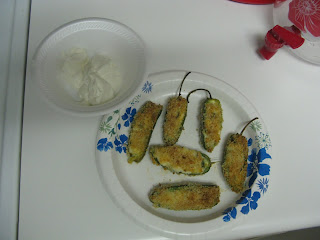 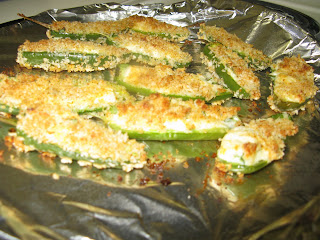 These are Skinny Baked Jalapeño Poppers. I like Jalapeño’s in moderation and I used to love the fast food Jalapeño Poppers. The only problem with my taste for spicy food is that I am a total wimp so I require some sort of dip that cools the taste. I used to dip everything in ranch but obviously, I can’t do that anymore. I was intimidated by the spiciness of these because I could smell the spice when I was preparing the peppers so, luckily, I had some light sour cream in the refrigerator that I could use. These aren’t hard to make but they are a bit involved. I have discovered that anything that has to be dunked in eggs and then breaded is almost more trouble than it’s worth. You take fresh Jalapeño’s, cut them in half, scoop out the seeds and membrane (they recommended you wear gloves but I didn’t have any so just remember to wash your hands a lot and not put your fingers in your eyes because it will hurt) and place them on a plate so they can be stuffed. In a separate bowl, combine light cream cheese, shredded low fat cheddar and scallions and then stuff each Jalapeño with that mixture. After you do that, you dunk each of them in egg whites (I always use egg white Egg Beaters), and then dunk them in a Panko bread crumb mixture using a spoon to cover the top of the Jalapeño with bread crumbs. Place them all on a sprayed cookie sheet and then bake them until they are brown and the cheese is oozing out. These little things were feisty as all get out. As I said before, I am a total sissy when it comes to spicy foods but even my roommate Cassandra who would live off Mexican food thought they were spicy. The tiny Jalapeño’s were worse than the fatter ones which is surprising because the bigger ones are juicier. They really tasted good and I loved the combination of the filling and the crunchy breading. It also helped that I piled sour cream on them but a couple of them made my eyes water…I had to take a couple breaks in between eating them.

I enjoyed both recipes and I look forward to browsing some more on the skinnytaste website!

Have a great weekend everyone!

I hope you are WINNING too!