In the swing of things.

We have finally reached the end of this long 4 day week. So, I know that all 10 or 12 (at best) of you have been waiting with bated breath to see how much I gained after my nearly 2 week travel food rampage. Oh, you don’t care or forgot that I was weighing? That’s fine. To refresh your memory, this morning was the first time I got on the scale in a few weeks. I was in New York one week, Nashville the next and then I wanted to give myself a week of being good in order to level out before I weighed. The scale was not quite as scary as it could’ve been. Because of my consistency with exercise and the week I gave myself to detox, I was only up 1-1/2 to 2 pounds (I weighed a couple times and got two different results). I am not unhappy with this at all. Assuming I don’t go crazy this weekend and have a great week next week, I fully expect (and hope) to make those couple pounds disappear and be right back where I was before I left New York. From this moment in time until August 12th which is the date that I want to reach my next mini-goal, I need to lose 9 pounds. I realized that this morning and I guess when I made that goal, I didn’t realize I was only giving myself just under 5 weeks to lose 9 pounds so that may not happen, especially since I will be spending a calorie ridden Saturday and Sunday in New Orleans during that time. If I can get close though, I’ll be happy. I am only about 4 pounds from having to decrease my daily points by one again. Tell me what kind of sense it makes to punish weight loss with less food! Oh well, that’s all part of the “one step at a time” method.

I know I've said this a million times but I want to encourage everyone today that has been procrastinating in their quest to get healthy to start today. Sometimes, people get a dangerous wakeup call that motivates them, but sometimes the wakeup call doesn't happen, sometimes deadly diseases can happen before it's too late. I know that sounds incredibly dramatic but letting your health spiral out of control is dramatic. I am speaking generally here, not to a specific group of people. Weight loss, while it plays a major role in many ailments, is not the only method of getting healthy. There are some people out there who don’t need to lose weight but don’t take care of themselves. I’m not always perfect. I’ll be the first to admit that I have some habits that I can’t let go but I really do try and I don’t think I’m speaking out of turn here. Someone once told me that you can’t love others until you love yourself. I think that’s a load of crap. But, I think you do a disservice to those you love by not taking care of yourself. If you are a parent, a friend, a teacher…you can’t be at your best if you don’t put yourself first sometimes. I don’t want to go any further on this soapbox but I just felt the need to remind myself and all of you to get started today and each time you mess up, pick yourself up…remember…it’s all about BALANCE! Ok, I’m done. 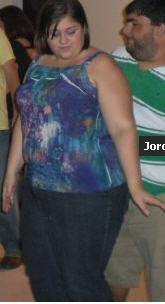 Today is Friday and since I want to start a Friday trend of sorts, I am going to post another version of a before and after picture. See, I ate what I wanted in New York and I’ve almost worked it completely off…this before picture represents a person who didn’t care enough about herself to clean out the junk she put in. I’m not that girl anymore…and I’m very happy about that.


Send me any before/after pictures if you have them and if you don’t, work to get some and then send them to me!

Have a splendid weekend! Bye!

“Yes, I'm grounded
Got my wings clipped
I'm surrounded (by)
All this pavement
Guess I'll circle
While I'm waiting
For my fuse to dry