Plateau, NO YOU DIDN'T!

Hello everyone! I weighed this morning and I was only down a few ounces from last week. I was a little miffed with this result feeling like I might actually be in a plateau. I went to the gym and ran and then luckily I was able to remove some food from my belly and I weighed again (TMI I know). After I weighed a second time, I was down 2 pounds bringing me .3 pounds down below the weight I was before New York City! I know that is totally cheating but I don’t care. I needed to make the scale move no matter what. I am sort of off my diet today but I’ll be back on for the weekend and next week. I’ve decided to change up my running routine a bit. I’m going to add another day of running to attack this plateau full on. I am also giving myself Sunday to mostly rest. I think my body needs rest too. We will see how this new routine works. I’m not too disappointed. I’ve lost over 105 pounds, I knew it would slow down at some point.

While I was in the kitchen yesterday at work, a girl came in who sometimes makes comments complimenting me on my weight loss. She looked at me and said, “Girl, what size are them jeans?” I found this to be a very rude question but since I knew she was TRYING to compliment me, I told her since I was fortunately wearing the smallest size pants I own. She told me I looked good but I just don’t understand why some people have to ask questions like that. Anyway, I just wanted to put that in here to make sure I wasn’t the only one who thought that was kind of a rude question. 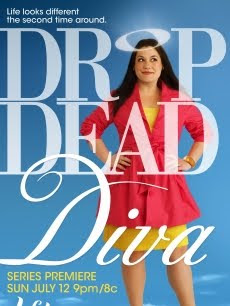 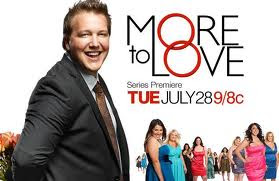 The movie and TV industry has never been particularly kind to people who are overweight. In general, if you are the one in a million bigger people lucky enough to find a job in the entertainment industry, you are usually typecast into a role that centers around your weight. There are very few actors who, if they are overweight, get jobs that ignore their body type. I won’t say there are none because if you are someone with extraordinary talent (like, in my opinion, Kathy Bates) than sometimes, you can get past all of that. Even those actors have attention drawn to their weight sometimes. There have been a rush of reality shows like “More To Love,” “Dance Your Ass Off,” and “The Biggest Loser,” that can sometimes exploit fat people and I don’t think that’s right. There are also shows like “Drop Dead Diva,” which are more tasteful but still, the premise of the show begins with a girl who dies and gets trapped in the body of a “fat” professional. Honestly, I don’t think Brooke Elliott should be called FAT…to me, she looks fairly average. Anyway, I like the show and I think the overall goal is to look at inner beauty but how would you like it if your entire job as an actress was to be compared to a former fashion model all day. I don’t know, I just had some thoughts on that and I figured I’d share. 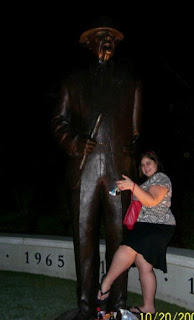 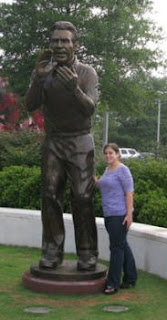 I must be out of my mind to share that first picture. I was acting crazy, as I usually am, posing with a statue of Bear Bryant in front of Alabama’s stadium. I’m not sure why I have my leg wrapped around it but that’s me…I’m nuts. Anyway, it’s not very flattering but that was the whole goal I guess to show myself in a different light. The upside is the “after” picture I get. This time, I’m posing with the Nick Saban statue…much better view. 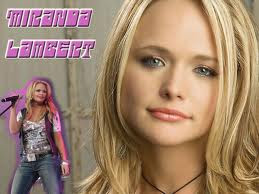 I’m excited! Miranda Lambert is playing in Tuscaloosa tonight and Dad and I are going! It should be fun. We are both so bummed about not going to New Orleans so maybe this will make us feel a little better.

I know I have been so random today but my thoughts are super random right now!

Have a great weekend y’all!