It’s almost the end of the year! 2011 was an exciting year for me. There are but's and if's to everything I am about to say but I will focus on the positive. In 2011 I lost weight, started teaching, wrote more, went to more football games, travelled and had a blast! I’m hoping for great things to happen in 2012, not just for myself but for all of you. I didn’t weigh again. I am sticking to the plan and I really am not going to weigh until January 20th. I’ve got to do a cleanse. I’ve been good since Wednesday morning but I will be bad this weekend. After that, I plan on being flawless until I go to the Wizarding World of Harry Potter on the 21st. That’s right! I didn’t say anything because it was a surprise but me, my mom and my Oma are going to Orlando to the Wizarding World of Harry Potter. As an HP nerd, I am TOTALLY freaking out excited! Anyway, I am going to try and be as good as possible to get rid of this holiday weight. 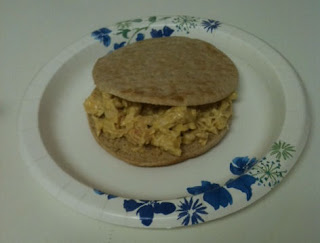 The recipe this week is just chicken salad. I love chicken salad and it’s another one of those foods that I never considered possible. I bought some canned chicken, mixed it with diced onion, salt, pepper, a serving of low fat mayo and a serving of spicy brown mustard. It had awesome flavor and it was a good substitute for the stuff that’s really bad for you. 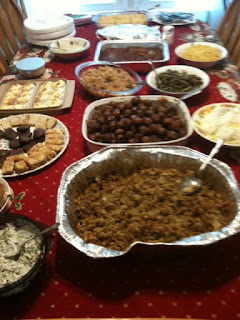 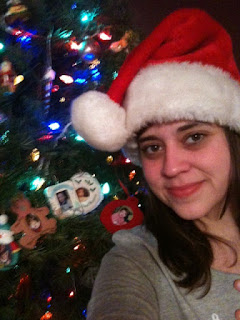 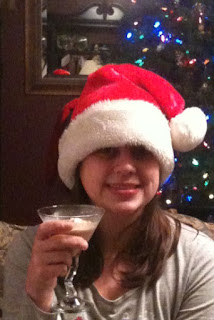 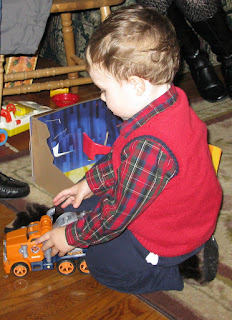 I posted some pictures from Christmas. We had tons of food at my grandma's house and even more at my parents, me and my mom made a S’mores martini that was yummy, I wore a Santa hat and took a picture of my cute cousin Drew playing. 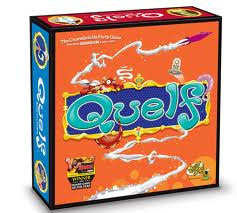 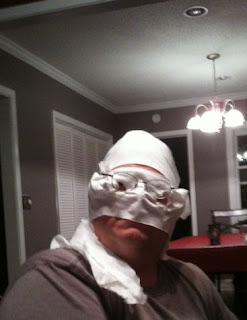 We played this new game called Quelf. It was awesome. You had to do all these random things. My Dad had to wrap his head like a mummy for an entire round. The game is hysterical and I can’t wait to play again! 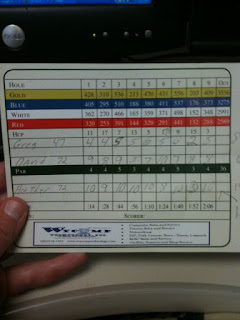 You are looking at the scorecard from my very first round of golf. I’ve been going to the driving range for months now and it was time to see what I learned. Well, I learned REAL quick what a mulligan was and I learned that when it says “cart paths only,” there is going to be a lot of walking involved. I also learned that I need a new pair of golf shoes. I got a size too small because they were the cheapest pair so I have giant blisters…because I’m an idiot. My Dad, brother and I went and I am beginning to wonder if we set a record for the longest round of golf that has ever taken place. My poor father struggled through 6 hours and 18 holes with two beginners. The first hole I played, I lost 2 balls because I hit the ball in a creek two times and then my bag fell off the back of the cart. It was cold and wet outside but I had a great time. I am going to get some new shoes and go out again as soon as possible. I was extremely tired after the first 9 holes…I was a little sore in places but not as bad as I thought. I got a double bogey on one hole and there were only 7 that I didn’t complete within 10 strokes so I was pleased. There was even a par 3 hole that I made in three if you don’t count the first drive attempt I made that went 10 yards (and I don’t). I don’t know if a triple bogey is a thing…but I got a couple of those too. 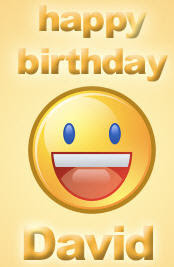 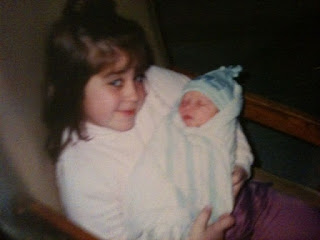 I want to wish my brother David a very happy 18th birthday. This is me holding him in the hospital. I’m a complete wreck when I talk about it too much so I won’t go into detail but I love my brother with all my heart and I’m so proud of him! 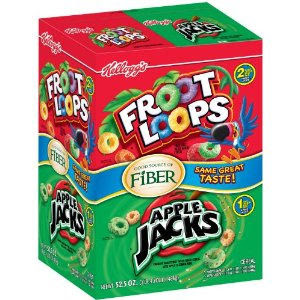 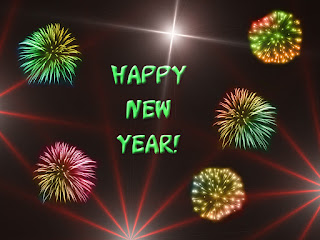 I hope everyone has a safe and happy New Year!!!