Quit Throwing Your Vegetables Under The Table!

Happy December Everyone! Last time we spoke I was getting rid of some football weight in preparation for Thanksgiving. Well, I am still up a little over 5 from my lowest weight but I worked hard this week and plan on working just as hard this weekend and the next week. I am disappointed and angry at the gain. I have never had this much trouble during the holidays. I think it’s because I am not just cheating on the actual day of the holiday, I’m cheating the Friday, Saturday and Sunday after too and that’s not good. I am arranging my calendar for the rest of the month and the new year and I will only cheat during Christmas parties and actual family Christmas meals. If I can make it through December and be up only around 5 pounds or less after the new year, I will be doing good. Once I get back on track it should only take me a few weeks to get it off, I just have to stay focused on the good days. Having said that, I started off Monday with strict dieting and as usual have not skipped at all in exercise…it’s just the food that’s getting me. I am not really panicking yet and I’m not really sure if that’s a bad or a good thing but I think it’s OK because I know I will reel it in. 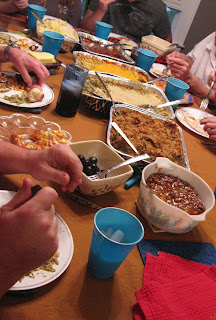 My extra pounds may have something to do with this picture. This was a picture of our Thanksgiving feast and even though some of us helped, big props to my mom for making most of this delicious meal. My problem had more to do with the non-pictured pie. I must’ve eaten 10 pieces of pie between Thursday and Sunday last week so thank GOODNESS, it’s all gone and I’m back to normal. It was a nice day with family. I hope yours was also nice. 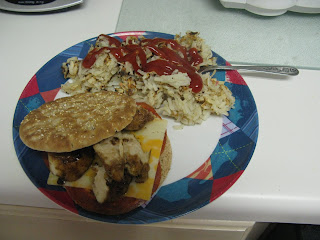 In order to get my mind off of all the calories I consumed, I also threw in a healthy recipe. This one is nice because it does have some fat in it. It’s a bit higher in points but still a great alternative to a fast food burger. This is a chicken sandwich that I threw together. It’s got sliced chicken breast (I actually prepared the chicken breast in the skillet, then sliced it), a piece of reduced fat cheese, spicy mustard, reduced fat mayo and sliced Chorizo. Chorizo is a type of sausage that I love and I happened to find it sliced in the deli section at Wal-Mart. I think Hormel makes it. It looks like sliced pepperoni or salami but it has a bit of a different flavor. Though it’s high in fat, it’s pretty low in calories. I piled all this on a sandwich thin. It was filling and delicious. You could save on fat and calories by taking out the mayo and/or cheese if you wanted. I fixed it up with some shredded hash browns and had a great meal. 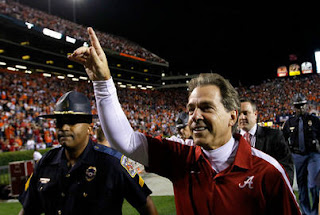 Also, while we were apart, Alabama totally dominated in the Iron Bowl versus Auburn. The game was on their turf but we are a better team this year and we were definitely looking for revenge. I hope it’s not annoying that I say “we” as if I play for the team but I can’t help it. I feel like I do play for the team. Because of this dominating win and key losses from other teams, Alabama is looking like they will probably get a rematch with LSU for the National Title. I hope it happens! 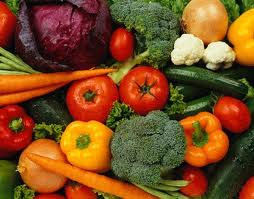 Since I have decided to no longer share before and after pictures (unless I hit a milestone), I have decided to give you tips I’ve learned along the way and/or share new products. Today, I have something simple to share…EAT YOUR VEGGIES!!! I know it’s something that should seem obvious but there are many people that don’t like vegetables. You should try sautéing them or including them in a pasta dish or casserole because they aren’t just low in fat and calories…veggies like spinach, potatoes, green beans and MANY, MANY other vegetables are LOADED with vitamins and nutrients that your body needs. I eat a lot of green beans, probably too many, but they are easy to make. I also really enjoy squash, spinach, potatoes, sweet potatoes and others in various ways. Some veggies like sweet potatoes and potatoes are a bit higher in calories/points but they are super filling and there is no end to the different ways you can prepare them. If you don’t like cooked spinach, try throwing some in with your salad. For those of you who only like corn, I hate to break it to you but it’s high in sugar and doesn’t really provide much nutrition so my challenge to you is to try other veggies. Don’t just think you have to have them steamed and boring…you can put them on a pizza, in a salad, mixed in with some pasta or in the skillet with your “fried” rice.

That was all I had today.

I look forward to relaxing and watching football but I also have errands to run and papers to grade.

I hope you enjoy your weekend.

“I’m dreaming of a national championship,
With every football game I watch,
So, here’s to you a big ol’ ROLLLLL TIIIIDE!
And, press onward, dear Crimson Tide!” Uh, I wrote this…just now…to the tune of White Christmas.
Posted by Heather Wyatt