There have been many points in this day when I thought it was only Tuesday so it has been quite refreshing to discover that it’s Wednesday. Today is a pretty good day...I have been planning future meals in my head all day. I’m pretty sure I know what I’m having for dinner the next 8 days...not really quite that bad but I guess that’s what you do when you are on Weight Watchers...you are constantly thinking about what you are going to eat next.

So, here is a question...why do you reckon that my knees and shins are sore from walking today? I mean, I know that sometimes muscles get sore when you use them after you haven’t exercised in awhile but I have been walking regularly for well over a year AND for the past couple of months...I’ve been walking every FREAKING day...so...why? Ugh, I think it might rain this afternoon (what else is new?) so maybe that has something to do with it. 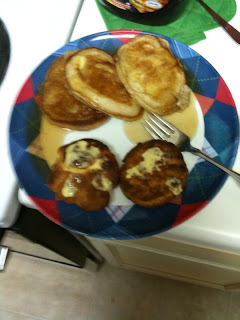 I made apple-cinnamon pancakes and buttermilk biscuits. As you can see, I burned the biscuits so they didn’t taste great...those were these least burned I could find so they got to be in the picture. What is weird is that they were supposed to be on for 10 minutes but I started smelling them burning after only about 7 minutes. Maybe I made them too thin? I’m not sure. While the biscuits were a bust, the pancakes were really good. They were moist and loaded with cinnamon. I put sugar free syrup on them...which I was skeptical about but I bought Hungry Jack Syrup sweetened with Splenda and actually, with a little spray butter added...it was pretty good. The pancakes were also good because they were only 2 points per pancake so I got to have like 4 of them. I quite enjoyed it! Even though I know everything else I’m eating for the next few days, I have NOT picked out my next recipe for next week...I will have to do a little research.

Well...the season finale of Glee was on last night... I know there are many naysayers out there about this show but I am a total GLEEK. The show is sweet, the music awesome and I already can’t wait for season 2 to start. The show was particularly exceptional last night...I love Journey and they did a medley. The show also has really good messages as well which is typical of most musicals. They said last night that they would be re-showing the season some so I may watch some of my favorite episodes again.

I think I will go home tonight and eat leftover pancakes for dinner! I hope you have a great night!!!

“I hear the drums echoing tonight
But she hears only whispers of some quiet conversation
She's coming in 12:30 flight
The moonlit wings reflect the stars that guide me towards salvation
I stopped an old man along the way,
Hoping to find some old forgotten words or ancient melodies
He turned to me as if to say, Hurry boy, It's waiting there for you

The wild dogs cry out in the night
As they grow restless longing for some solitary company
I know that I must do what's right
As sure as Kilimanjaro rises like Olympus above the Serengeti
I seek to cure what's deep inside, frightened of this thing that I've become

Hurry boy, she's waiting there for you