Well, did you think I was never coming back? Please don’t answer if it involves a statement that goes something like: “Oh, I didn’t even notice you didn’t blog!” OR “I was actually glad for the break.” That just wouldn’t be very nice. I have to admit, I didn’t miss getting up early and coming to work. I am one of those people that has to repeat the “I’m just thankful to have a job,” chant in the mornings. I especially get that way after the night I had last night. I couldn’t sleep for anything. I woke up a hundred times, nearly sweated to death and had nightmares. I don’t know what’s going on with me but I need to calm the heck down.

I hope everyone had a great Memorial Day Weekend! I did. I had four days off and had amazing food. Here’s a picture of David and me on Memorial Day: 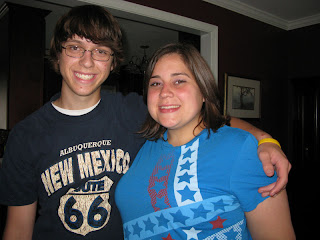 Yesterday, I started my initiative to Jettison The Junk In June (J.T.J.I.J.). I have to say...it’s going ALRIGHT but I’m concerned about Saturdays. That is going to be my real challenge. I already have people trying to feed me and make plans. I’ve just decided that I will spread out my points as best as possible and just suffer. Haha. Let’s just say I’m excited about Sunday. I know it will pay off though. It HAS to pay off. I haven’t weighed in a few weeks mostly because I know that I’ve gained but I have gotten out of the habit and that’s not a good thing. I probably won’t officially weigh in this Saturday but I will definitely go on my own scale to see where I’m at and hopefully I will be back to normal by the end of next week. I am glad I started this project to be good every day (except Sunday) in June because I was headed down a scary path.

Tonight is recipe night. I will be happy to share all about that tomorrow. Truth be told, I’m more excited about next week’s recipe which may or may not involve pancakes and biscuits...but I will just have to wait to talk about that.

I hope everyone has a great Wednesday afternoon!

Everybody jumps in
Never really knowin'
Where it's really goin'
You just have to trust in
Your heart, oh yeah.” Everybody Does-Martina McBride
Posted by Heather Wyatt