Traveled Down The Road & Back Again.

Boo on the hectic-ness of this day. It has been a crazy day but tomorrow is Friday, so that’s a good thing! I am starting to wish that every week were only 3 days but oh well...gotta do what you gotta do. Today is the second day in a row that I got up at 6 in the morning and walked 2 miles so that’s something to be proud of and I have been completely good for 3 days in a roll so I’d say I’m on a roll. 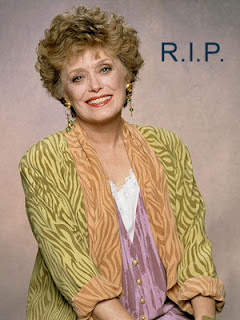 Rue McClanahan died today. She was best known for playing Blanche Deveraux in the Golden Girls which was great and I also used to LOVE watching Mama’s Family. She will be missed! There is only one Golden Girl left...I can’t lose Betty White so she just better hold tight. I guess what they say about celebrities dying in 3’s is right because in addition to Rue, you also have Dennis Hopper and Gary Coleman. It’s crazy.

Anyway, I made my recipe last night...here it is: 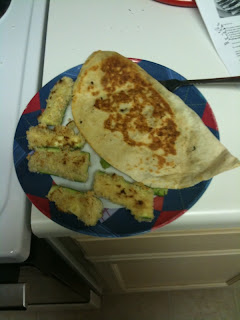 It was pretty good. It was a Beef, Cheese & Broccoli Quesadilla with Zucchini Fries on the side. Initially, the quesadilla was supposed to have spinach and blue cheese but I used broccoli and feta instead. It was pretty good. The side dish was zucchini fries. You used egg whites and Panko to dredge them in and then bake them. It was a pretty good dinner...not my favorite because the majority of it was vegetables. I like vegetables but it was almost overkill...but I will say it was one of the most filling recipes I’ve made. It serves you well to eat veggies because you can eat WAY more when you do. I really like the tortilla/quesadilla idea though...it was good...since I have several tortillas now, I might make a couple more of those soon. I don’t have much more today because I am sort of in a rush so I hope you have a great afternoon!

And if you threw a party
Invited everyone you knew
You would see, the biggest gift would be for me
and the card attached would say,
Thank you for being a friend