I do believe that Tuesday is my least favorite day of the week. It seems to go by much slower than the rest of the days. On the upside, in just a couple of hours, I will be making my weekly recipe (which I’m excited about...I hope it turns out good), eating it with my friend Nichole AND watching the season finale of Glee!

I’m especially hungry today for some reason...I think it’s because I’m doing the diet correctly and I know I have three more weeks in June. Truthfully, the goal of being good in June is to continue being good in July...lol...but I already have two very UN-Weight Watcher-y Saturday’s planned in July so...we’ll see.

Anyway! I feel like a broken record lately so I was going to share something a little different today. A couple of months ago, I had plans to start watching Jamie Oliver’s Food Revolution...I had heard great things about it but I just now got around to watching it this past weekend. 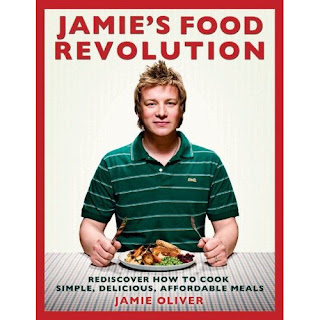 I watched the first 3 episodes and I have to say that I was astonished at some of the things that the kids were being served. The show began in Huntington, West Virginia which is the city said to be the most obese place in the world. This is based on statistics of how many people die from diseases related to obesity. Jamie started in an elementary school just to get an idea of what the children were being served. As soon as he got there, he noticed the children were being served pizza for breakfast AND for lunch and they are always offered French fries. I know that people argue that the parents should be teaching good eating habits at home. In a perfect world, every parent would come home and serve their child a well balanced meal...but it’s not a perfect world. Most kids have working parents and some kids have parents that don’t care. School is where you learn about physical activity...so you should also learn about nutrition. The first day, Jamie made a healthy lunch option but of course the kids all picked the processed foods. I think his biggest challenge is coming up with food that kids like (tacos, pizza) and making it healthy. Jamie did get involved with the parents too. He brought this huge dump truck full of saturated fat out in front of them and told them that is how much one classroom consumes in a year. It was disgusting. He also chose one family in particular that had a freezer FULL of frozen pizza and two of their 3 children were on a very fast road to diabetes. It was really sad...The main challenge is feeding the children food that they like AND in the same budget as the processed foods. He also has to deal with the stupid guidelines of food for the school. The state requires them to have a cup and a half of vegetables (that’s not the stupid part). Jamie made this pasta loaded with veggies and the superintendent said that was not a big enough serving of vegetables BUT because French fries were considered a vegetable, they were allowed to be served. According to the guidelines, FRENCH FRIES are more acceptable than a pasta with vegetables.

I realize that cooking a meal from raw ingredients three times in a row for children at home or at school isn’t realistic. Sometimes, corners have to be cut but the show is definitely worth watching. There are some really good ideas and it’s proof that sometimes it’s worth the extra effort to keep people healthy...especially children...if you learn how to eat as a child, you are much more likely to carry those habits into adulthood. I like the show, you should give it a try...go to hulu.com and look the episodes up. Also, it doesn’t hurt that his accent and lisp make him cute as a button.

Ok-I hope you all have a good afternoon...there is cooking in my future!!!

When we dance
When we laugh
When we touch

When we dance
And we laugh
And we touch (touch touch).” Touch-Natasha Bedingfield
Posted by Heather Wyatt