Big People Can Exercise Too

I think the sentiment for my upcoming weekend is “sleep is for the weak.” At different points between tomorrow morning at 6:30am and Sunday night at about 8 pm, I plan on exercising twice, grocery shopping, attending a coupon party that Whitney is hosting, driving to Birmingham, driving to Chattanooga to have lunch with my family, watching 4 Oscar movies and having dinner at my parents. This is a weekend that I am used to though…I usually stuff every ounce of things I can into a weekend because it’s my only time to get things done, see my family, etc so I don’t usually just have a free open weekend with nothing to do…I like it that way…I won’t exactly get a ton of rest but that’s OK.

I weighed in this morning and I was down .6. I am happy to be down but I am going to have to find a way to pick up the pace. My birthday is in EXACTLY 15 weeks and I wanted to lose 15 pounds by then but I’m not sure that I can accomplish that at this rate but I am going to give it my best. I am going to stick to the same routine for awhile and if I don’t notice a difference by the Friday after Valentine’s Day (I can’t miss out on a cheat piece of cheesecake) then I will probably take away a cheat meal…which would be pretty upsetting considering how flawless I am with my diet habits during the week and also how hard I work with exercise but WHATEVER. I am sort of cranky today due to a caffeine overdose yesterday that caused insomnia and then when I actually DID get to sleep, I had TERRIBLE nightmares…so…that .6 of a pound wasn’t quite enough to put me in a good mood. I am looking at the big picture though…I’m down a total of 83.2 pounds! I am SO close to that 85! I am excited to change my picture.

As you may remember, I participated in a program called Couch to 5K and I completed it so I’ve been running for 30 minutes 3 days a week for several weeks now. It is most definitely part of my routine. I wouldn’t say I am very fast or that I’m running with ease or anything but I would say it’s a permanent fixture in my routine. I am hoping to improve my posture, longevity and speed over time but for now, I am so proud to be kind of a runner. Because I am so dedicated, I will run in pretty much any condition. I haven’t skipped a day at all because I am so scared that I will not start back. I am not a member of a gym because they were in the process of building one at my office….that took a little bit than expected so I’ve been running in the freezing cold, rain or snow…I’m the mailman for running. It was starting to get a little old though so I was ready for the gym to be done. The gym at work is done now and I’m very grateful for that…I went running for the first time in it yesterday and I had two people look at me in shock as I outlasted them and basically out-exercised them completely. One of them told me how proud he was and one girl (she may weigh 120 pounds soaking wet) just looked amazed and said how good I was doing. I appreciate the praise but if I had a toned, thin body, they wouldn’t have said a word. It was like I was some fat girl phenomenon…they couldn’t believe that someone of my size could move that long at a steady pace. I promptly posted a Facebook status that said, “Just because you are skinny does not mean you are in shape, and just because you are a big girl doesn’t mean you can’t school a size 2 girl on the treadmill.” It’s true…why are people extra proud of me for going to the new gym ONCE. I’ve been exercising every day for like 2 years now. I know people mean well but jeez. 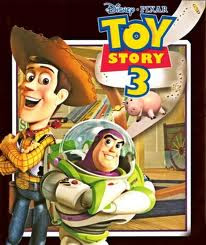 The first was Toy Story 3. I will preface by saying that I really enjoyed the movie. I love the Toy Story movies, they are funny and adorable. I have to ask though, why do animators find it so necessary to make children’s movies so dang depressing. I cried like 10 times during this movie. It was nothing like watching Up last year though…I was inconsolable for a couple hours after the beginning of that movie. I guess writers feel like the tension in the movie brings a needed reality to a child but I don’t know…it was tough. It was a great movie though…I love Buzz and Woody! 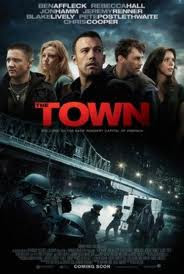 I also watched The Town. This was a directing and acting project from Ben Affleck. It was about a prominent group of bank robbers in a town outside of Boston. The movie was really good. The only major nomination it received was for Jeremy Renner for Best Supporting Actor. I think that’s fair as the only nomination. The movie was good, don’t get me wrong. I do feel that there wouldn’t have been rampant gunfire on people in my nightmares last night though if I had never watched the movie. I am also super opposed to scary faces and masks and there were a couple creepy masks in this movie. My other complaint would be that at times during the movie, it seemed a bit contrived. I feel like ever since Good Will Hunting, Ben Affleck has been trying to walk across that stage again to accept another Oscar and I feel like he might as well have “I’d really like another Oscar and this time, I don’t want it to be associated with Matt Damon,” tattooed on his forehead. I realize that all that makes me sound like I hated the movie…I REALLY didn’t…I thought it was pretty good and I think Jeremy Renner is deserving of the nomination but based on what I’ve seen, he’s not deserving of the win. I adore Jeremy Renner, I think he is a wonderful actor but I was telling Jordan the other day that I think he needs to do a romantic comedy or something so I know he’s not crazy because I’ve seen him in 3 movies, one where he plays an obsessive, explosive disposal sergeant, one where he is a violent, misogynist miner and most recently, a gun happy bank robber. I’m glad he can step outside of the box but I’m concerned he may actually be disturbed…which is fine because he’s still extremely hot.

Well, as I said earlier, I’m going to be checking a lot of movies off the list this weekend so I should have lots to report next week.

I hope you all have a nice weekend! Please take a moment to remember those who lost their lives 25 years ago on the Challenger!

I lose my way
I lose my trust
I lose myself
When I lose us
I find my strength
To start again
When you're with me.” Break Thru-Natasha Bedingfield
Posted by Heather Wyatt