You Gotta Try A Frittata!

Welcome to the first blog of 2011! I hope you had an awesome New Year’s Eve and New Year’s Day! I had an absolute blast on New Year’s Eve! Some friends and I went out and danced and had a great time. I didn’t take many pictures for some reason but I did post a couple below. New Year’s Day was also nice, I was able to relax and watch Alabama totally dominate in their bowl game against Michigan State (I also posted a picture for that too). The bowl game was bitter sweet. It was sweet because it was a nice, strong way to end the season and a ten win season is not necessarily bad but it also made me bitter because if we had played with that intensity in every game this year, I feel confident that we would be headed to that national championship game again. Oh well, there isn’t much good in dreaming about what could have been and I suppose you can’t win the national championship every year…there is always next year. I miss football season already. After the game, my mom made her traditional New Year’s Day meal. I guess it is good luck to have black eyed peas and greens…well I despise black eyed peas and nobody in my family really eats greens so my mom makes spinach dip for the greens and black eyed pea jambalaya. She started making the jambalaya years ago…it’s DELICIOUS…it’s one of my favorite meals…it has rice, sausage, shrimp and of course black eyed peas which I can easily pick out. I do make myself eat one or two of them though so I can get whatever good luck I can get. All in all, it was a great holiday and a really nice way to end the year. I am totally back into my routine now. I am glad to be back in the saddle but it has been a little more challenging than usual because I am used to waiting in anticipation for the next opportunity to have a cheat meal and now, other than my standard two cheat meals on the weekend, it’s going to be awhile before I get to go crazy. I weighed last Friday and I was up and then I cheated both New Year’s Eve and Day so my best guess is that I gained 5-7 pounds over the holiday season. I have a lot of work to do but it could have been worse. The good news is that I’m still very determined to reach my next goal and I am right back on track. I’m hoping to knock a couple of those extra pounds off this week. I will weigh Friday and let you know…hopefully it won’t take me more than a few weeks to get back to my last lowest weight. 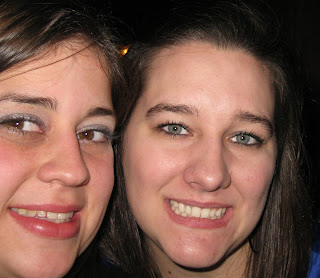 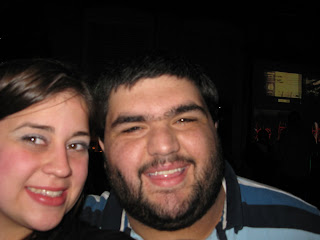 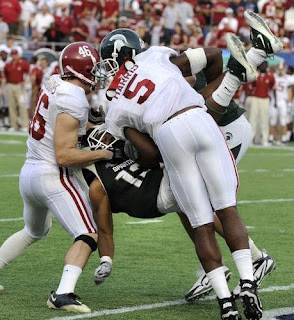 My first recipe of 2011 was Spaghetti, Artichoke & Zucchini Frittata… 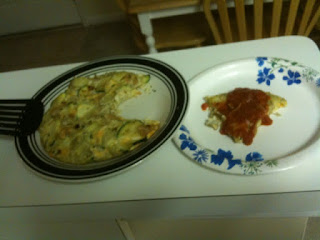 It’s quite a mouthful to say and also kind of tricky to type but it’s way easier than it sounds. I know that those of you out there who aren’t crazy about vegetables (especially artichokes and zucchinis) are thinking that nothing could sound more gross but I promise, it wasn’t that bad. I wouldn’t really say I love artichokes. Honestly, until last night, I’d only had them in dips or on a pizza so I have never really tasted one. Last night though I tried a bite before I mixed them in and honestly, they didn’t have that much flavor…they have an odd consistency but when I used them in my recipe, I didn’t even notice that they were there. I also feel like zucchinis don’t have that much flavor but if you don’t like the texture, I don’t see why you couldn’t substitute them with a potato. Basically, you mix together eggs, cooked whole wheat pasta (the recipe called for spaghetti but I used the whole wheat pasta I already had in the pantry), artichokes, fat free cheese, salt and pepper. After you sauté some onions, garlic and zucchini, you put that in the egg mixture and then dump the whole thing into a skillet. Let it brown on the bottom for a few minutes and then pop it in the oven for about 5 minutes until it is firm in the middle. While it’s cooking, warm up some tomato sauce (I used store bought spaghetti sauce that had a little extra flavor) in a sauce pan or in the microwave and drizzle it over the pieces of frittata after you get it out of the oven. Before I started the recipe thing, I don’t think I had ever made a frittata…I may have never even eaten one (I’m not sure) but since I’ve been making recipes every week, I think I’ve made three. They are really easy and low fat and quite filling. Don’t be afraid of mixing eggs with things…I’ve been surprised…eggs taste good on burgers, with veggies or even topped with spaghetti sauce. If you don’t experiment with new food, you’ll never make it!

I think that was all I had for today! Wish me luck with the new year and I will do the same for you!

Talk with you soon!

I don't say much and it'll stay that way
You got a steel train touch and I'm just a track you lay
So I'll stay right here underneath you
I'm just a basket case and that's what we do.” Basket Case-Sara Bareilles
Posted by Heather Wyatt