Good day everyone! Unfortunately, it’s only Tuesday and I can tell this week is going to be a slow one. The work day yesterday seemed like an eternity and as usual, my free time after work went by before I could even blink. I guess that is just the way it goes. Even though I had a disappointing weigh in Friday morning, I pressed forward this weekend and worked out and had my allotted cheat meals so hopefully I will weigh a little less Friday. I am really going to keep my fingers crossed that I do because if I don’t, I’m going to have to get even stricter…and who wants to do that? It’s good to know that I can maintain weight though so in the future when I actually get to a goal weight, I may not have that much trouble maintaining but at this point, I don’t want to maintain, I want to LOSE! So, we will see how it goes. 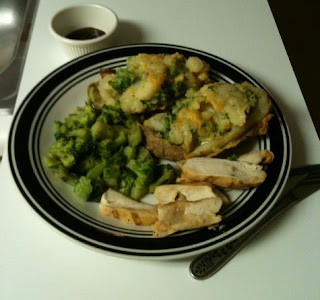 I made Twice-Baked Potatoes. As you can see, I served my Twice-Baked Potatoes with a side of broccoli and some chicken. They don’t look very pretty but they sure did taste good. I love twice-baked potatoes so I was happy to see a healthier version. You may be able to tell that there is broccoli in the potato as well. If you don’t like broccoli, you could leave it out or substitute it with something though I’m not sure what vegetable may go well…you put onions or carrots I guess…not sure. I happen to love broccoli so I not only put it in the potato, I roasted some in the oven with garlic and put it as a side dish as well. The process was very simple. You just bake a potato (which I did the night before because it takes about an hour), slice it in half length-wise, scoop out the insides, put them in a bowl and mix with some cheese, milk, olive oil, broccoli, Dijon mustard, cayenne pepper and some salt. After you mix it all up, you spoon the mixture back into the potato halves and put them in the oven for 10 minutes or so until they are all bubbly. It was super easy and because I like to eat my peel, I put a little barbecue sauce on the side to dip the peel in. You get both halves of the potato so if you serve it with a veggie and some chicken or pork, it’s very satisfying.

This weekend, in addition to having fun with friends and family, Jordan and I began our Oscar movie marathon. You may or may not be aware of this but Jordan and I always see most of the movies nominated for Oscars. We see all the best picture nominees and all of the movies that have people nominated for best actor/actress and best supporting actor/actress. We see at least those, we try to get in a few others as well that may be nominated in other categories. I think this will be our third year. It’s always a close call because living in Alabama, we don’t always get the smaller, more independent movies. Last year, we BARELY made it. There are days when it means we watch two or three movies in one day. It can be daunting (and expensive) but it’s totally worth it when you watch the Oscars because you know all the movies and can make appropriate judgments. The nominations haven’t come out yet but preliminary lists from magazines and the Golden Globes gave us a good idea and Jordan was able to make a preliminary list. I’ve seen Inception which I loved and I’m very sure I’ve talked about. I’ve seen The Kids Are All Right which was also awesome. Before this weekend though, those were the only two I had seen. This Sunday, Jordan and I saw the Black Swan… 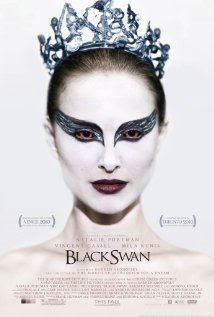 This movie was very…different. I can definitely see why Natalie Portman has received such acclaim. She did an amazing job transforming into the part of a paranoid dancer who is cast as the queen swan and truly believes she is transforming into a black swan. I heard this movie described as a psychological thriller and that is EXACTLY what it is…the movie is very sexual and aggressive and flat out creepy. I absolutely am not a fan of scary movies. This movie has multiple disturbing moments that will probably prevent me from watching it again but the more and more I dwell on it, the more I think it’s a fantastic movie. I only had a couple of nitpicky issues after I watched it and if you know me, when it comes to Oscar movies, I think about everything wrong with it. I actually get on my own nerves but I want to really understand why it’s nominated and I can say with 100% certainty that out of three movies I’ve seen, it deserves a spot at the Oscars. If I think about the movie too much it gives me chills because it’s so dang strange…but I can’t deny the quality of the directing and acting of Natalie Portman.

I will probably mention most of the movies I see over the course of the next few weeks, especially the more popular ones. I know that really doesn’t fit in with the weight-loss theme but it actually pertains more than you think because of my wretched need to have popcorn when I’m at the movies. It’s a pretty trying struggle. Also, I enjoy giving my two cents about movies…so you may just have to deal with it.

I will probably watch a couple more this week and then try to watch at least one, maybe two this weekend so I’m excited. I love award season (such. a. nerd.).

Don't let me get me
I'm my own worst enemy
Its bad when you annoy yourself
So irritating
Don't wanna be my friend no more
I wanna be somebody else.” Don’t Let Me Get Me-Pink
Posted by Heather Wyatt