Hi All! Is everyone bundled up? If you got a snow day today, I have to say that I am pretty jealous. If you aren’t someone that lives in Alabama, we had quite a winter storm here on Sunday night. In the northern parts of Alabama, they got 3 or more inches of snow. Where I live in Tuscaloosa, we only got a dusting of snow but we got A LOT of sleet. It was raining ice for several hours which made the roads freeze over so I was off of work yesterday. I was happy to have the day off but at the same time, it was boring and almost unbearable as far as dieting goes. When you are trapped in the house all day, all you want to do is snack but I was good and I managed to make it through the whole day without breaking my diet. Other than the rough driving conditions, I had a nice weekend. As I told you Friday, I weighed that morning and I was only one pound away from getting rid of holiday weight so I was excited. I went to the gym meet with my friend David and saw Jordan and his family and my Mom and Oma…it was a fun time. Saturday, Jordan came over and we went to dinner and I ate WAY too much on my cheat meal…ugh, it about made me pop and then I went out with some friends. I didn’t do too much Sunday, after I ate dinner at my parents, I had to hurry home to get away from the ice. Hopefully, by the end of the week, I will have gotten rid of that extra pound and I will be on my way to losing again. *Fingers Crossed!*

Normally, I would put a picture of the event that I am discussing but I don’t think I can bring myself to post a picture from the National Championship game last night. In case you missed it, Auburn won the BCS National Championship game against Oregon. If you aren’t a football fan, you may not know that this news is devastating to most Alabama fans. Alabama and Auburn have a fierce rivalry and now we have to hear them talk about this for the ENTIRE year. Ugh, there isn’t really anything that can make a silver lining but I guess if you were REALLY reaching, you could be happy with the fact that the state of Alabama has won the BCS national championship game two years in a row and the SEC has won like 7 times in a row. Of course, I don’t think it’s a surprise to anyone that the SEC is the best conference…I never really disliked Auburn that much until we moved to Tuscaloosa. The atmosphere between the two teams is hostile. I do know some Auburn fans that aren’t obnoxious but for the most part, I don’t care for them…I especially don’t care for the team. I think some of their players play without class and unfortunately, it reflects upon the whole team. Anyway, football season is over and I’m going to miss it…there is always next year!!! Roll Tide!

As usual, I have a recipe to share with you… 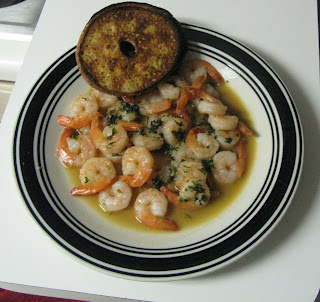 I made Shrimp Scampi. Shrimp is the only seafood that I really love…I will eat a tuna sandwich, scallops and fish that is fried or blackened as long as it isn’t fishy. I have been known to try grilled Alaskan Salmon, Tuna Steak or a Tilapia as long as they are extremely fresh and not remotely fishy. Basically, I’m not a huge fan of seafood. I despise a really fishy taste and every time I’ve tried sushi, I’ve almost lost it…gross. Even though I like shrimp, I only think I’ve tried to cook it once or twice. I’m not sure why…maybe I just don’t like the preparation part. This was pretty easy though. You can use fresh or frozen shrimp (I used frozen because it was the only shrimp I could find that had the tails and was deveined…I REFUSED to do all that). Basically, you just sauté the shrimp with olive oil and then add in a lot of garlic. Then you put the shrimp to the side and add some low sodium chicken broth to the pan with all the left over oil and bits of garlic, add parsley and lemon juice if you like the citrus flavor (I don’t) and pour it over the shrimp. I made some garlic bread to go with it. I was a bit skeptical since I was using frozen shrimp but it actually turned out delicious and it was really simple to prepare. It was also a nice, hot meal for a cold day!

Keep warm and have a great afternoon and week!

I’ll talk with you Friday!

How can I hold it together
When nothing I try makes it better
I just wanna lay here forever
Cause if I don’t get up, then I can’t fall down

There is no manual for a broken heart
I want to use it but it’s all in parts
(Oh)
The more you fall in, The harder to see
If this time it’s different will I want to release
And I don’t know if I have it in me
To love again in a face of defeat