Good afternoon all! It’s been a crazy busy week so far in work and also regular life. The Oscar nominations came out this morning and I will certainly talk about those…I made some progress this weekend. Other than movie watching, I didn’t do too much this weekend…I hung out with friends and family as usual. As per every Tuesday, I have a recipe to share… 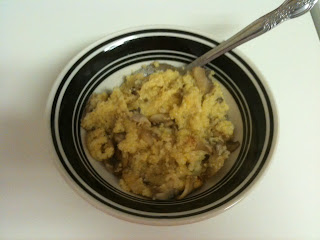 This dish was Creamy Polenta With Sauteed Mushrooms. The dish was actually supposed to have mushrooms AND peas but I don’t eat peas. I was going to use green beans instead but I had a major can opening issue. All I will say is that I wasted a perfectly good can of green beans and I put can opener on my shopping list. If you aren’t familiar with polenta, it’s yellow grits (hence my silly blog title that was an attempt to tie my movie talks together with my recipe). They use polenta a lot in Italian dishes...and on the food network. This was very easy to make. I will have to remember how easy it was next time because it took so little time to make that I overcooked the polenta. Basically all you do is sauté mushrooms and add vermouth and let it boil…that makes a sauce and then you pour it over the cooked polenta (that you mix with some parmesan cheese). Because I cooked the crap out of the polenta, I just mixed everything together so it wouldn’t be too thick. The vermouth and parmesan gave it great flavor. It was quite tasty and it kind sounded fancy so I was satisfied overall.

As I said earlier, the Oscar nominations came out this morning and I am pleased to say that I have already seen 5 out of the 10 nominated for best pictures. I plan on watching Toy Story 3 at some point this week. I also have plans to watch The Town which wasn’t nominated for best picture but there was an acting nomination in there. The goal will be to watch at least the nominations for best picture, acting, directing and writing. If I get to all 16 of those, any others (animated, music, etc), that will just be a bonus. Like I said, I’ve only seen 5 so I have a lot of work to do. I will tell you a bit about the two I saw this weekend. 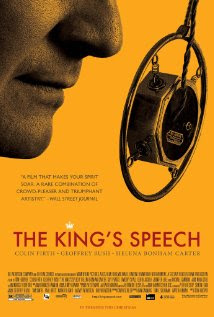 The King’s Speech featured the AMAZING Colin Firth. I wasn’t sure I would like this movie because I have little to no interest in British history but I should have known that Colin Firth would make me change my mind. This movie also had Helena Bonham Carter in it and while unfair to her, I basically despise her because of the character she plays in the Harry Potter movies. Luckily, I was able to move past it and I thought she also did a wonderful job. I think this movie definitely deserves the acclaim it is receiving. The directing and acting were both great and the movie was poignant. Colin Firth is definitely worthy of his nomination because he did an amazing job portraying a member of British royalty that has an awful stammer. The movie had the whole package…I laughed and I cried so that’s pretty good. I wouldn’t say it is the kind of movie I would buy and watch repeatedly but it was certainly a work of art. 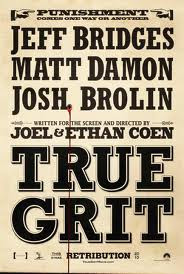 The next movie is True Grit. I didn’t know much about this movie before I saw it. I knew it was a remake of a movie I hadn’t seen and that it was a western. In general, I have very little knowledge of westerns. I don’t think I’ve ever seen an old western, nor do I think I have interest in seeing one. I will say that there have been two modern westerns prior to seeing True Grit that I loved and they are Tombstone and The Assassination of Jesse James by the Coward Robert Ford. Those two movies took me by surprise…and so did True Grit. Perhaps I should rethink my dismissal of westerns…we’ll see. Jeff Bridges really is an awesome actor. This movie was funny and honestly, gut wrenching at the end. Luckily, my dad went too and he was so disturbed that there were animals being harmed that he distracted me from the difficulty of a couple scenes. I would argue that Hailee Steinfeld was a perfect addition to the movie that helped make it great. She played the young girl in the movie seeking revenge for the death of her father. She’s a cute girl with some great talent. I think the King’s Speech is a bit more deserving of the big award but not by much.

Out of the five movies I’ve seen so far, Inception is still my absolute favorite. It basically has no chance of winning but I LOVED it. I have been really itching to watch it again and as soon as I get all the other movies out of the way, I plan on watching it like once a month or something. It’s SUCH a smart movie and my fave, Leo, is wonderful in it as always. I would say the other movie that I’ve seen so far that I would probably buy is The Kids Are All Right. I saw this one a while back…it was pretty awesome. The movies have been good so far. I think I will probably see The Fighter this weekend…my goal is to be three more movies deep by next week’s blog. I can do it!

Have a great remainder of your week! Bye!

And I don't know
I could crash and burn but maybe
At the end of this road I might catch a glimpse of me
So I won't worry about my timing, I want to get it right
No comparing, second guessing, no not this time

Three months and I'm still breathing
Been a long road since those hands I left my tears in but I know
It's never really over, no.” Sober-Kelly Clarkson
Posted by Heather Wyatt