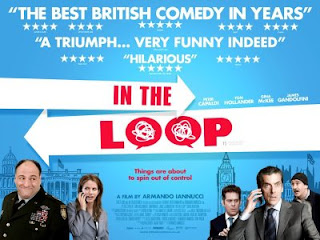 Nichole & I went to see In the Loop last night. I thought it was really good. It was a British movie which I like but it was kind of loud in the place which made it difficult to understand them at times. Overall, I thought the movie was hilarious...those British people are crazy funny sometimes. I also thought it was cool that Tony Soprano and Veda from My Girl were in it. I definitely see why it was nominated for stuff. Evidently I had added the movie to my Netflix queue and unfortunately it’s already on the way to me. I will send it right back so hopefully I don’t waste too much time. I won’t get to see every Oscar movie but my plan is to watch Inglorious Basterds over the next two days and then supposedly I’m getting District 9 and The Hurt Locker next so if I can get all that done next week...I will have seen most of the big ones (except Precious and Blindside of course). Maybe I can fit in a movie next Saturday somewhere in Birmingham...I really want to do my best to see as many as I can...I think it’s fun!

Before we went to the movie, we went to Moe’s. I don’t know if I’ve mentioned this but a couple times ago...the guy totally knew I wanted chicken. Several of the shift managers look at me like we are old friends and sometimes...it makes me feel fat. I mean I shouldn’t be recognizable to the staff at Moe’s but apparently I am. I love that place...I crave it EVERY day. Well, last night when I told the girl I wanted sour cream, she goes “There is a 50 cent charge for that, is that OK?” They never actually charge for the sour cream (I hope that’s not like a VIP thing) but naturally I said, “Yes, that’s fine.” And she goes, “Yeah, I figured it would be, I’ve seen you in here before.” Well, of course she has. I KNOW how stupid it sounds but that cracked me up...and then devastated me. I don’t want to be KNOWN at ANY food establishment. The last time I was there before last night, the cashier was all up in my life...asking me about work...at first I thought it was because he was flirting though I was confused because I don’t get that too often but Stacey definitely thought he was flirting. He even came around to our table while we were eating to ask us if we need more chips...umm...they don’t do that at Moe’s. Maybe he wasn’t flirting (though the thought of free Moe’s MAY have crossed my mind)...maybe the head Moe’s dude is all, “Pay special attention to the frequent flyers...be extra nice to them.” Anyway, I mostly just thought it was funny. I have had several experiences with folks in the food industry who feel the need to make commentary on how much you’ve eaten or how hungry you are or how things are big enough to share. PSHHH! Just give me my food and leave me alone.

That being said, I still absolutely love Moe’s and I try to fit them into my schedule on a regular basis.

Tonight is going to be a TV catch up night for me. I need to watch Brothers & Sisters, American Idol (which I still plan to discuss when the top 12 is decided) and I need to start on Inglorious Basterds (that is quite an undertaking). I also plan on cleaning a bit. So-there’s that.

I think that’s all for today. I heard the song below earlier and it kind of pumped me up for the whole diet/exercise thing. I’ve done well this week except for the soup binge of 2010 that happened yesterday. Here’s hoping I can lose one or two before Paris on the 13th!

Have a great day!