I am patting myself on the back right now for the very productive week I’ve had. I got all caught up on TV and watched about 30 minutes of Inglorious Basterds. I’m weird...I watch movies in stages...who has 2-1/2 hours to sit and watch a movie? I know that most people wouldn’t consider that productivity but I certainly do. I also cleaned my bathroom, vacuumed and did some laundry. I’d say that is an overall good night. I even got up and made a real dinner with a chicken sandwich, green beans, broccoli and low fat macaroni and cheese. It was pretty good. Tonight is trivia night. I’ve started following the people that do the trivia around the state on the Facebook and they give a hint every week. This is the first week that I’ve been able to see the hint and all that it said was “Ned Flanders family...” I’ve only seen maybe one complete episode of the Simpsons in my life but I knew that Ned Flanders was from the show. I’m glad I saw the hint because I would have had NO idea what the answer was. Believe it or not, Ned Flanders Family has its own Wikipedia entry so I think I now have all the knowledge I need to get the answer right. I probably shouldn’t have admitted that I went into research mode for bar trivia...but I did...so judge me if you will. 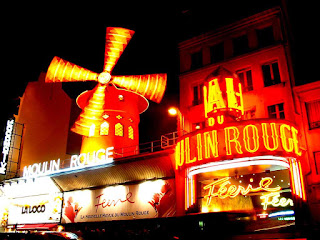 I made our reservations for Moulin Rouge today. My mom, brother, my brother’s girlfriend, Jordan and I are all going to see the show while we are in Paris. The tickets are pretty expensive but it’s a once in a lifetime sort of thing. The closer March 13th gets, the more excited I get. I have been looking on Wikipedia for German beers and Parisian cafes and that makes it seem more real. I keep forgetting how far away we will be...it seems crazy. I have been looking forward to eating what the crap I want to in Paris. I sort of envisioned myself with a load of croissants in my backpack, a handful of frites and brie in one hand and crusty bread in the other. I am sure that I will partake in many pastries. I was all worried about gaining weight but I think I will be walking...A LOT. Also, in terms of actual meals...I looked at a few menus for some cafes and um, the French love fish...and rabbit. Here’s the thing...unless fish is deep fried or comes out of a can and then mixed with half a cup of mayo...I’m not usually interested. Also, rabbits? No. I will try things...I really will...but it doesn’t seem like I will be enjoying Paris for the exquisite French cuisine. I’ve seen Julie & Julia and aside from the desserts, I wasn’t interested in any of that stuff. I will try some things so I am not too closed minded but I think I will be enjoying the German food far more than the French...maybe I’m wrong.

Well, I better not get TOO excited right now seeing as how I still have over two weeks left but TRUST me when I tell you I am getting in list/itinerary mode and once I get going...it’s hard for me to stop. I get pretty determined and kind of scary when I need to plan something. We are all going to be somewhat poor when this is done but hey...you only live once (according to many people).

Wish us luck at trivia...I’ve studied and we’ve got lots going so...no excuses (except for that people cheat a lot there)!

“If you think about it, your favorite memories, the most important moments in your life... were you alone? Life's better with company.” Ryan Bingham, Up in the Air
Posted by Heather Wyatt