I wish I were a bird (or not fat) so I could fly far, far away

Despite the fact that I was up .8 pounds on Saturday, this weekend was pretty good (I will have a couple pictures to share tomorrow so I will save the details for then). I have come to terms with the fact that I will not lose weight every week. Admittedly, it is VERY frustrating that I worked so hard last week and still didn’t lose weight. I had one night where I wasn’t great. I guess if I want to lose, there is no room for error. I am attempting to have an error free week and so far, so good (I realize it’s only Monday). I am not ready to give up just because I’m stuck...even if I think about throwing it all away every once in awhile and eating double whoppers for snacks and whole buckets of chicken for dinner and entire cheesecakes for dessert...believe me...I’ve thought about it...but no...this is a test (as my mom said) and I WILL persevere. 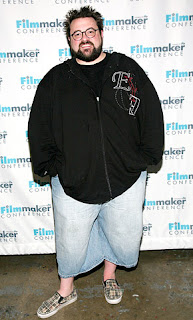 Yeah. That’s Kevin Smith. I know him as the guy who directed or wrote movies like Clerks, Dogma, Chasing Amy (which I try to pretend never existed), Zac And Miri Make A Porno (this is my personal favorite and oddly enough I think he said this was his least favorite of his) and many, MANY other movies for a let’s say...”specific” group of people. I would say that I’m a fan...though some of his movies are a little much. Some of you may know him only as “Silent Bob.” Some of you may not know him at all but many of you know him now as that director dude that wasn’t allowed to fly on a Southwest plane. I know, I know I’m about a week late on this story and I do apologize...I’ve been busy. Evidently, if you didn’t already know, Kevin Smith was asked to leave a Southwest plane because he was too fat to fly.

I would venture to say that 75% of the people (at least in Alabama) are wider than your average plane seat. I don’t know if I’ve told you this but before I lost weight...I was a milkshake and a bag of M & M’s away from an extension belt. I fit fine now but I always used to imagine the nasty things people might be thinking as I walked on the plane. Southwest is first come first serve so there are no assigned seats. I know that I wouldn’t want to see a Kevin Smith-sized or even a me-sized person coming towards me on a Southwest flight...those planes are TINY. I get it...some folks don’t fit “comfortably” in plane seats or roller coasters or other things. In this case though, I think they made a very “big” mistake. In more cases or not these days, the size of the bums on many people has grown and to kick someone off the plane who had already paid, seated himself AND put the armchairs down is just tacky. I’ve never been one for public humiliation. In fact, I think it’s a quick way to send people packing...in religion, sports and yes...planes. I won’t say that I won’t ride on a Southwest plane ever again. I support Kevin Smith but I’m also poor and Southwest flights are pretty cheap but I will give a big, “SHAME!” There...I feel like I’ve done my duty. Hang in there Kevin Smith...also...no pressure...but I would HIGHLY recommend Weight Watchers...you’ll be allowed to stay on planes in NO time.

I need to do some SERIOUS TV watching tonight but not until I fit in another exercise session. I feel so hardcore...I WILL LOSE WEIGHT IN FEBRUARY DANGIT.

Have a great night!