Today is a good day despite the fact that it isn’t nearly close enough to the weekend. I went to bed entirely too late because I went to see The Bounty Hunter (it was cute...good but not great) with Stacey but I am not as sleepy as I predicted. I had a good workout this morning and it’s been a fast paced day ever since. I went to Wal-Mart during lunch because I needed a few random things. I also needed new workout pants. I have never had much need for workout pants until a year ago but now the few I have are all worn and some aren’t even workout pants...they are pajamas or sweats that are too big for me so...it was time for me to get some. They had a really great variety of exercise clothes at Wal-Mart...I was pleasantly surprised. I got 3 pairs of pants (1 gray, 1 blue & 1 black). Two of them were $9 each and one pair was $13 so it wasn’t bad at all. They are stretchy/yoga type pants. I also needed them because our company’s softball team is about to get going. I will tell you more about that tomorrow...I guess I’m a masochist for playing but I figure even if I don’t play much, it’s still a little bit of extra exercise which is helpful.

In theory, buying exercise equipment is a great idea. I was using the elliptical every day for months not too long ago and Cassandra was looking to use one to so she decided to buy one. It sounded like a wonderful idea at the time. She bought it and I have only used it once. For starters, I have been giving running a try so I use the treadmill at the gym more and also...the thing needs to be worked in I think. Either it takes awhile for all the oil and screws to settle or Satan himself designed this machine because it feels more like an evil Stairmaster than the smooth, gliding elliptical I’m used to. Don’t get me wrong, I’m glad she bought it and I think she is using it more than me...it is her elliptical...she just lets me use it...but that thing about killed me. I can go 40 minutes on the elliptical without hurting...5 minutes on that thing and I was about to cry. It’s currently in the living room so every time I go to sit on the couch...it’s there...staring. I plan on using it at night some soon. I’m kind of hoping Cassandra will break it in a little bit more.

There have been times when I’ve made purchases or requested gifts that were in theory, supposed to promote fitness...many times. I bought an above the ground pool when we all lived in a house and I still get anxiety thinking about that $300 that went down the drain. I think we used it once maybe...I ended up selling it for $50 in the paper. Just FYI...if you do ever want to get one of those...MAKE SURE YOUR LAWN IS LEVEL OR YOUR PURCHASE WILL BE IN VAIN...and not just “mostly” level either...like completely level. Also, to make it even MORE obnoxious is that my parents warned me not to get it but I didn’t listen and I HATE when they are right...parents are gloaters...all of them...no matter what they say.

I also asked for a mini trampoline for Christmas...last year I think...and my wonderful Oma got it for me. For a few months, my roommates and I bounced happily for a few minutes every other day and then...it dwindled. Little by little the location of the trampoline proved all too convenient as it was right in front of the dryer. At first I would remove anything from it and then I gave in. That trampoline sits in my room now and is BY FAR the BEST place to lay out my clothes for the week that I’ve ever had. I also have made plans to use it soon too.

So, most treadmills end up looking like this in people’s home: 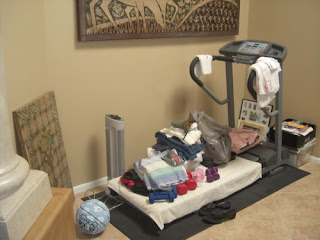 This picture is of nobody’s treadmill that I know but it could be...easily. My parents may have predicted the pool disaster but I seem to remember a certain Cross Country Nordic Track that became quite the closet in their room for a long time. The point is, I don’t want the purchase of the treadmill to be the death of my exercise routine. I am doing so well and it seems natural to upgrade my relationship and have the treadmill actually move into my apartment but I’m afraid it will ruin what we have at the gym. Also, it’s not an investment that I can choose to engage in lightly...they are VERY expensive. I found one that Wal-Mart sells online that is reasonably priced...it’s around $300...which is WAY cheaper than all of the name brand machines but I would want it to be good quality. Also, my membership at my gym is only $100/year...so I don’t know. Do you all have any opinions? Should I just stick to what I normally do and go to the gym or take it to the next level and get my own? Also, keep in mind that I’m not exactly in a place to make frivolous purchases....maybe I’ve answered my own question.

I hope you all have a great evening.