It occurred to me sometime back that I wasn’t going to be able to continue only using the elliptical as my means of exercising. My body was used to it. I was getting to the point where it was easy and I wasn’t pushing myself. I mean, I would still sweat and all but I didn’t feel as worked out as I should. This is the reason I’ve been trying to add some change. I want to mix the elliptical up with other things. A few of my friends run and I’ve always sort of dismissed it. My knees aren’t great, I have no arches so my feet kill me so running never really appealed to me. I also forget to stretch a lot and I get shin splints. To be honest, I’ve never given it much of an effort. There was one brief phase when I was on the Atkins diet that I would go to the rec center when I was going to Alabama and attempt to run but it never went well. Like anything, I know that running takes practice. So-I thought I’d give it a try this morning. I warmed up on the bike for 10 minutes...I have to say...I don’t care for bikes. The ones with the flat booty hurt my butt and are very uncomfortable. The ones that are high up and shaped like an actual bike hurt...well...in a different place. I took a spin class once in college and I walked like I was riding a horse for a week. It was AWFUL and I SWORE I would never go back. Anyway, after the bike, I got on the treadmill. 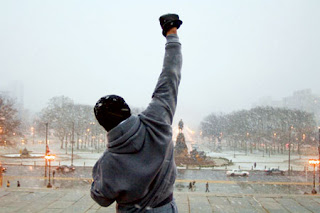 Nish gave me some advice because she has been running awhile...she started off slow and now she can run for a long time. She told me to walk 2 minutes and then run 1 minute (I think/hope that’s what she told me). So, that’s what I did. I did this for 20 minutes. I was sweating like a crazy person...it was a GREAT workout. I stuck to it the whole time. When it came time to run the minute, I did the whole minute. I’ve never been very fast...at anything...so it took me a little over 18 minutes to go a mile. That may sound awful to you but this was my first try. You are talking about someone who used to “run” the mile in 30 minutes in high school and THAT time was only because I cheated. I run like a fat hedgehog. I ball up and take baby steps...ugh...the softball team when your dad coaches when you are 8 is not good for a slow runner. Whatever, I’m over that. The only thing that really bothered me was the treadmill I was on made this grating, sounds like an elephant stampede, noise every time my foot landed. I am HOPING that isn’t a result of my “solid” frame. I’m HOPING that the treadmill is just old. Anyway, I felt really accomplished. I know that I’ve only done it once and by no means am I a “runner” but I’m going to try it again tomorrow. Maybe I can run for 1-1/2 or 2 minutes instead of 1 this time and get my mile down to 17 minutes? Maybe not, I want to take it slow. I’m pretty sure I will be sore tomorrow but that’s the whole point right?

Even though I’m pretty hardcore with the exercise this week...I have eaten like a psycho today. WHATEVER...if you are on a diet, close your eyes for the next sentence. If you have never had a cinnamon bagel with honey walnut cream cheese from Panera Bread, stop what you are doing, leave work...whatever...and go get you one...you need it. I kind of expected this backsliding to happen but I will get better soon. I have a disease...leave me alone. I know I sound like a broken record but post-Paris, there will be many a blog on how miserable I am because I will be in the middle of being very strict. I have already decided that aside from Sunday, I won’t cheat again until my birthday. I WILL get to 65 by my birthday (May 13th). Talking about food is making me hungry...I’m glad I’m going to City Café with my mom today. I NEVER get to eat there...Weight Watchers would NOT approve...but you aren’t going to tell them right?

Alright then, that’s it I think. I like posting at lunchtime instead of when I’m off work in the evening...I think...I guess I’m just inconsistent. I hope you all have a great afternoon.