It’s FRIDAY!!! WOOHOO! I’m happy the weekend is finally here! This weekend I get to see Whitney and her crew and my family in Chattanooga. It should be a fun weekend. I don’t have too much going on tonight...we will just have to see.

I don’t really have too much today. I think I am just itching to for the weekend to “officially” start.

I will share what I thought about earlier though. Some people at work were going to City Café for lunch. If you don’t know, City Café is a Meat & Three kind of place. I love it. When I wasn’t dieting, my meal there consisted of a fried chicken breast (dunked in ranch of course), mashed potatoes & gravy, macaroni & cheese and fried green tomatoes. They also have rolls and cornbread. So, yah, not the healthiest meal ever. In the south there are a ton of these types of places with country cooking. Sometimes, it’s hard to get around. I have only been to City Café once in the past year probably and I went with EVERY intention of cheating...I don’t get it often. I was wondering earlier though how I would possibly survive if I had to go there with someone.

There is another place that my mom and I go to call Mr. Bill’s which is kind of similar. She loves their cornbread so we go sometimes. For some reason, it’s easier to eat there than City Café. When I go there, I get a smoked chicken breast, a baked potato and a double order of green beans. It’s usually pretty good...though they’ve recently done away with the baked potato at lunchtime. Anyway, places like that usually have either a smoked or grilled chicken breast. They almost always have green beans. The only problem with green beans is that if you are from the south, they are probably made with bacon grease. There is this place downtown and their green beans are LOADED with chunks of bacon. Trust me...you can tell...green beans don’t naturally taste like pork. I tend to choose them though and hope that it’s not that bad. Honestly, it sucks to eat at these places but you CAN make better choices. If they have a baked potato, corn on the cob, sliced tomatoes, tossed salad, or a fruit of some sort...that’s going to be better than piling your plate with nothing but fried food and starches. I know it’s tough...in fact they are probably some of the worst types of places to go to...but you can suffer through it if you need to. Gosh...I REALLY want some fried green tomatoes now. If you love them like I do...you could fry up some turkey bacon, then sauté thinly sliced green tomatoes in the same pan and then have a guilt free BLT...those things are pretty good.

As an aside, I looked up the points for the Double Down sandwich at KFC (for research purposes only of course) and it’s only 13 points. I mean I know it’s a lot but the Baconator is like 21 or something. In case you didn’t know, it’s the one that uses fried chicken as the bun and it has bacon and cheese and some sort of sauce in the middle. I might try it sometime...you know...just so I can be an efficient diet blogger. I’ll let you know what I think...I’m looking out for you. 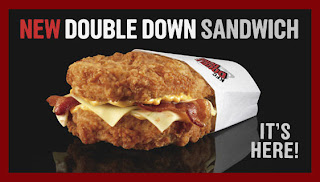 Good luck out there.

I hope everyone has a great weekend. I might try to take some pictures but I wouldn’t get too excited considering my lack of picture taking these days.

“You know I like my chicken fried,
cold beer on a Friday night,
a pair of jeans that fit just right
and the radio up.” Chicken Fried-Zac Brown Band
Posted by Heather Wyatt