I'm Not Fakin', You Can Have Bacon!

It is much less hectic today thank goodness. Yesterday was a very busy day. The good news is that I had enough points to have McDonald’s for dinner and catch up on some TV. I managed to get my lazy butt out of bed this morning and work out. That was the first time I have gotten up and got on the treadmill in awhile. I’ve been walking at night because I think the morning was wearing me out. I did a couple miles and I just go so much faster on the treadmill so I’m pretty sore. My knees are what hurts today. I’m not sure if the hurt is because I worked out hard and it was beneficial or if the hurt is a warning sign...I don’t want my knees to go completely bad...I need them so I may slow down a little from now on if I’m on the treadmill. Either way, I don’t think it’s a bad thing to slow it down sometimes. I can mix it up. No matter what, I’m still moving and getting all of my steps in. I told myself I need to get up again tomorrow morning but we will see what happens.

It’s interesting because I’ve done a lot of thinking/talking about Egg Beaters this morning. I was going to tell you all about a sandwich I had yesterday with Egg Beaters and it just so happened that Nish texted me this morning asking me if I ate them because they were filling AND a girl from work asked me if I have eaten them before because she had some today...so I got egg beaters on the brain. I think I’ve talked about eating them before. Are they the world’s most delicious egg? No. Would I rather eat real scrambled eggs with cheese? Yes. Do they smell like a mixture of aluminum and sulfur while cooking? Yes. Do they make a good, filling substitute to have for breakfast? Yes. Nish said she eats a serving (which is about ¼ cup) and a piece of light wheat toast and it’s only 1 point. I have been getting the ones that have two servings. It comes in packs of three and each pack is about the size of a pudding cup. They say that each cup has 2 servings...this still only adds up to about 60 calories (one serving only has about 30) which is still only one point. So, that’s pretty good...you get a bowl of scrambled eggs for 1 point...throw some salt & pepper on them and it’s not too bad.

Anyway, the sandwich had bread...I know I’ve talked about Nature’s Own before...but it’s great and you get 2 pieces for 1 point if you get the 40 calorie, honey wheat kind.

Egg Beaters...which I talked about before.

Cheese. I can’t stand fake cheese. Sargento makes a reduced fat Colby Jack that is only 40 calories and one point per slice and it tastes REALLY good. I can only ever find it at Wal-Mart though. 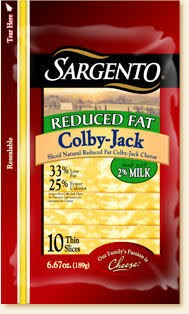 Bacon. I think this is the right brand...You can just pop this bacon in the microwave for like 20 seconds and put it on the sandwich. The best part is you get 4 pieces for 70 calories which is only 2 points. Also, I’d like to apologize for the incredibly cheesy title...I like things that rhyme. 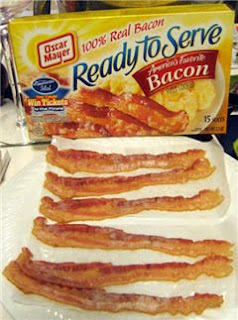 Basically, you can have a bacon, egg & cheese sandwich for 5 points and it’s pretty good. I think it might be my new thing.

Ok-today is the first softball game. If you will remember from my story...it should be interesting. I’m not even sure that I’ll play but I will be there to cheer Nichole & Cassandra on. I’m not too thrilled about missing Idol but there are more important things right?

Oh, you know it'll all turn out
And you'll make me work so we can work to work it out
And I promise you kid to give so much more than I get
Yeah, I just haven't met you yet.” Haven’t Met You Yet-Michael Buble
Posted by Heather Wyatt