This week is chugging right along. Miss Mullet Muffin Top stole my treadmill this morning but I am trying not to be dramatic about it...at least not in this forum...I’ve complained about it to Jordan and my Mom but they are very used to me going on and on about things. I had some crazy dreams last night about high school and shootings and witches...some days I think I should write all this down...I mean...witches...really? Maybe that is the Harry Potter revelation I’ve been waiting for...I need to write about witches.

I went to McAlister’s for lunch with my Mom today. Like a company should, McAlister’s posts their nutritional data...they have this “Choose 2” option where you can choose any two of either a sandwich, Panini, spud, soup or salad. It’s great...you go to that food item on their nutrition page and cut the nutrition facts in half because you only get half of each. You can figure out the points and they have lots of good stuff. You choose two of those (I got half a grilled chicken salad and a cup of vegetarian chili totaling 8 points) for $5.99. I was pleased...I will eat there more often.

I also watched Idol last night and thought I would give you a brief update. Three things to sum it up. 1.) Even though I know he isn’t always great and makes up notes sometimes that don’t really exist, I love Lee and would like for him to be my husband. 2.) Crystal is sort of not in the same league as the others. She’s not always perfect but she’s consistent and she is a true artist and 100 times better than at least 6 of the 7 other contestants. 3.) If I had to choose the order in which people left now starting with tonight, I would want Aaron Kelly to go, then Katie Stevens, Tim Urban, Siobhan Magnus (though her and Tim are about the same), Michael Lynche, Casey James, Andrew Garcia, Lee Dewyze & then Crystal Bowersox as the winner though I don’t think it matters for her...she’s getting a deal so secretly I hope Lee wins because they can sand down some of those sharp notes in the studio.

Now, to the point I had today. Sometimes it takes me awhile to get there. I was trying to do some research yesterday about whether or not you really have fat days. There are some days when no matter what, I feel fat. I could be at my lowest weight or have a new outfit but still feel fat. I always think if I gain weight while I’m on my “cycle” that it’s not my fault. Unfortunately, I read something on Weight Watchers that totally busted my bubble.

With that time of the month comes water retention, Weight Watchers says: “The most likely reason for a weight gain is water retention. While this is a common symptom that can be particularly discouraging when following a structured food plan, the weight gain is usually minor and temporary (that is, any weight that is gained is lost around the time of menstruation).” So- basically, it shouldn’t make much of a difference. Well, at least I know why I crave chocolate right? “Although food cravings are commonly reported during certain times of the menstrual cycle, the scientific evidence on the subjects is limited.” They do admit that there is a SMALL connection to the sweets but they aren’t really budging. I really don’t care what they say...I get crazy for chocolate. The most annoying quote: “While there may be minor changes in metabolism, food intake and cravings throughout the menstrual cycle in addition to possible water retention, these will not impact weight-loss success.” Whatever they say I guess.

Still, I know that some days...no matter what I do...I feel fat. I found the picture below on the internet and thought it was cute. 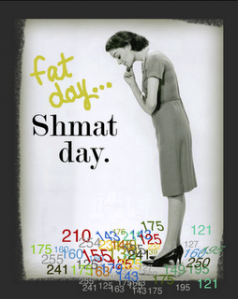 We have to remind ourselves sometimes that what we see isn’t what everyone else sees. Sometimes, I even see a caricature of myself...or at least I HOPE that’s what it is. The next time you think you are really bloated or that your cycle is making you fatter...remember it’s probably in your head...you actually look hot...at least that’s what I try to say to myself...sometimes it isn’t always convincing.

Talk with you all tomorrow.

“You can’t stop my happiness
Cause I like the way I am
And you just can't stop my knife and fork
When I see a Christmas ham,
so if you don't like the way I look
Well, I just don't give a damn!

Cause the world keeps spinning
Round and 'round
And my heart's keeping time
To the speed of sound
I was lost til I heard the drums
Then I found my way.” You Can’t Stop The Beat-Hairspray (The new movie/musical soundtrack)
Posted by Heather Wyatt