Greetings Y’all! I am SO happy about the return of cooler weather. It could not be more of a perfect weather situation than the past few days. It’s crisp in the mornings, breezy and slightly warm during the day...UGH...it’s AWESOME! I hope you all had a marvelous weekend. I have to say that mine ranked pretty high up on the weekend scale. You know how I was all scared to weigh because of the Savannah Binge Fest of 2010? Well, when I got on the scale Saturday morning, it was the first time in a few weeks that I had weighed because I had a couple rough patches and wanted to make sure there was some time in there where I was spot on. Somehow, I ended up being down 1.6 pounds from the last time I weighed bringing my total to 76.6 pounds! I’m not sure if the weight will catch up with me this weekend or if I just got lucky but I was definitely not complaining about those numbers. I only have less than a pound before I have to get rid of another point so that will help give me a little boost.

Saturday was also awesome because Bama beat the mess out of the Florida Gators! I stopped by my friend Whitney’s tailgating spot and took a picture of her daughter Mya (LOVE HER) who was all about some school spirit! 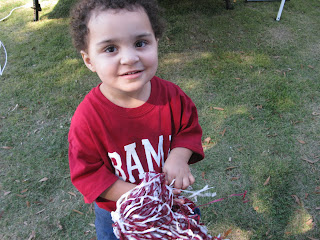 She’s so cute! The game was awesome. Aside from Florida’s first drive, there was never a time in the game that Alabama didn’t totally dominate. It was actually surprising how terrible Florida played. We have a pretty tough game on the road this Saturday so I will be watching nervously from the couch in my pajamas...I’m not going to lie...I like an away game from time to time so I can relax.

Sunday was nice too...me, my Dad, brother and his girlfriend all made my mom dinner for her birthday. We had steak, baked potatoes, sautéed mushrooms, bread and grilled corn. For dessert, I made a Paula Deen cheesecake recipe: 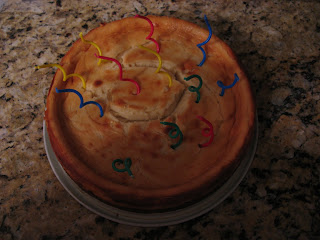 Instead of using the topping Paula suggested, I set up a “cheesecake buffet” of sorts since people have different taste preferences. I provided several options so people could create their own cheesecake masterpiece. You could choose from fudge, caramel, strawberries, Butterfinger and pecans. It was SO DELICIOUS. It was definitely not a Weight Watchers friendly dessert...the crust alone had a stick of butter in it...but hey...you gotta splurge every once in awhile right?!

Since I posted a picture of cheesecake, I figured I better balance it out with a picture of this week’s recipe: 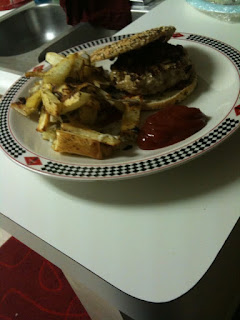 This was a Bacon-Cheddar Turkey Burger & Cheese Fries. Some of my favorite Weight Watchers recipes are those that play with food that we all love. I love burgers so it’s always nice to get one and not feel bad about eating it. The bacon and cheese get mixed together with the ground turkey so the patty has everything you need in it when you cook it. I know the picture is a little dark but you can see that it’s a pretty thick burger and I used my delicious new everything bagel thins as a bun. I also made my favorite baked cheese fries that I think go with everything. It was a really tasty dinner!

That’s pretty much all I had to share today...I am doing well so far this week which is good...I feel like I have momentum! There are a couple of people I know that are getting on the bandwagon again and sometimes they talk to me about it...I won’t call them out but I will say to them and anyone else who is trying to get healthy: good luck and I KNOW you can do it! Have a great afternoon/week! Bye!