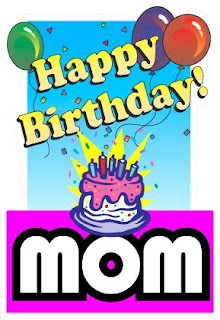 That’s right! It’s my mom’s birthday today. I called her at 7:30 this morning to tell her happy birthday and the woman was already at work...on her birthday! Crazy...but she obviously has an awesome work ethic...which is why she makes the big bucks...right mom? ;) Anyway, we are going out to eat tonight and then Sunday night, me, my Dad and brother are going to chip in and make a yummy dinner to celebrate. I hope you have a great day mom! You deserve it. I don’t think my mother is quite the birthday diva that I am but I wanted to give her a shout out.

Since I didn’t report on a recipe Tuesday, I will tell you about one now... 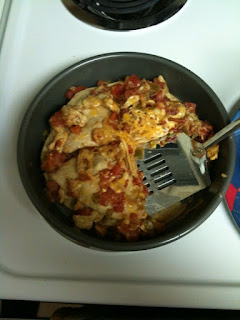 This was Turkey Enchilada Pie. It doesn’t look too appetizing but it was pretty good. I have to say it wasn’t my favorite recipe but only because it called for chopped tomatoes and peppers so I just used Rotel since it’s the same thing...well...they didn’t have mild Rotel at the store so I just got the original flavor thinking it wouldn’t be too spicy. I don’t know if it’s because I didn’t have sour cream or a ton of cheese to cut the heat or if I’m just a wimp but it was WAY too spicy. I am not a fan of really spicy food...I just don’t usually think it tastes that great. The recipe had a lot of Rotel in it so if it had been even a tenth spicier, I don’t think I would’ve eaten it. I will definitely remember in the future that I HAVE to have mild Rotel to make the recipe. It was pretty easy to make. You just sauté some ground turkey and onions and then you layer whole wheat tortillas, the turkey meat mixture, fat free cheese and then the Rotel...kind of like lasagna...and then you bake it for a little while. I think I would have definitely liked it much better had it not been so spicy.

So, I am going to weigh tomorrow morning for the first time in a couple of weeks and I’m pretty nervous about it. I have been fairly flawless this week with Weight Watchers but I know my body hasn’t forgotten the four day southern binge fest from last week so I will be assessing the damage. I am hoping it won’t take me more than 1 or 2 weeks to get back to my down 75 pound mark. Like I said before, I am itching for that 100 pound mark so I am full speed ahead. I have almost a whole month and a half before I do anything cheat worthy again (I’m going to Vegas in November!) so that will give me time to make a couple more small dents in the 100 pound voyage. You know, it is crazy to think that in about 6 months (hopefully), I will have lost 100 pounds...and rest assured...I will still be a chubby girl at that point...lol...with a ways to go but I can’t even lift 100 pounds...I’m looking forward to it but...man...I had really let myself go to have the need to lose 100 pounds. Ok-I’m done harping on that now. : ) I will have to report on my scale experience next week. On to other important things... 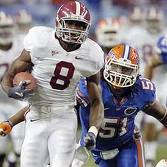 Alabama is playing Florida tomorrow. If you aren’t into football, you may be tired of hearing me talk about it (or see me writing about it) but you will have to skip this part for the next several weeks because that’s what I do from September to January...I watch football. Alabama had a close call last week playing Arkansas...I hope they got themselves together so they can DESTROY Florida. Florida’s fans have been talking so much trash...BASED ON MY EXPERIENCE...there are MANY Florida fans that are no fun to be around. They are bitter and mean and sometimes violent. This is not to say that Alabama doesn’t have their share of crazed fans but I choose not to talk about them...lol. Anyway, ROLL TIDE! I fully expect us to win (I hope).

It is my wish that everyone has a safe and fun weekend! Bye!!!


“Life is a mystery, everyone must stand alone.
I hear you call my name and it feels like
Home.

When you call my name, it's like a little
Prayer. I'm down on my knees, I wanna take you
there. In the midnight hour, I can feel your
Power. Just like a prayer, you know I'll take you there

When you call my name, it's like a little
Prayer. I'm down on my knees, I wanna take you
There. In the midnight hour, I can feel your
Power just like a prayer. You know I'll take
You there.

Like a child, you whisper softly to me. You're
In control just like a child, now I'm dancing.
It's like a dream, no end and no beginning.
You're here with me, it's like a dream. Let
The choir sing.” Like A Prayer-Madonna
Posted by Heather Wyatt